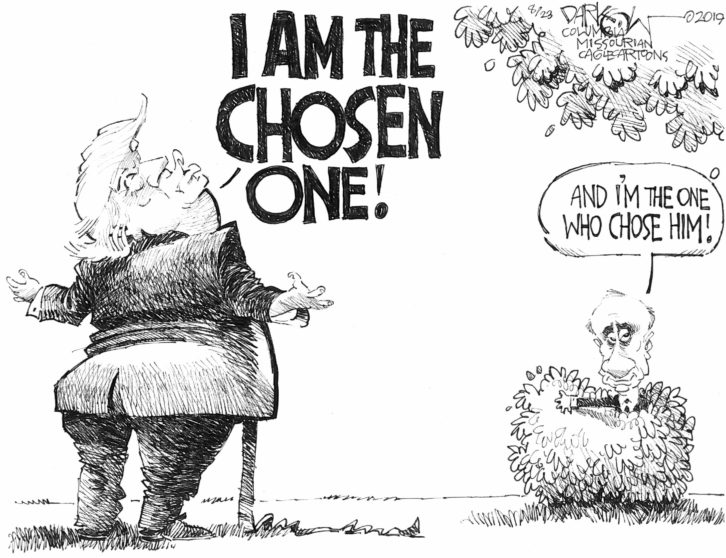 A Clear And Present Danger

Whenever Donald Trump says or tweets a remark that embarrasses our country before the world, conventional analysis suggests that it is yet another consequence of his infantile narcissism. So we were told again when the president of the United States insulted Denmark, one of the founding nations of NATO and a dedicated American ally, by canceling his scheduled trip to meet with the Danish prime minister – supposedly because she had deemed his scheme to buy Greenland “absurd,” which, of course, it is.

When Trump appears to lose control – and follows up by suggesting that he is “the chosen one” or “the King of Israel” – it seems natural to worry that he is mentally ill. That is one way to interpret his behavior.

But it isn’t the only explanation.

We consider Trump’s behavior bizarre because it is so incongruous with what we expect from an American president – whose sworn duty, after all, is to act in the national interest. But what if he is consciously acting against the national interest? That disturbing question arises again and again, as it did during the Russia collusion investigation, because almost everything Trump does can be viewed as inimical to the nation. The Danish incident is only the latest example in the long list that shows a certain method to his supposed “madness.”

In one way or another, Trump has denigrated or undermined American relationships with nearly all of our traditional allies, sometimes repeatedly. He has complained publicly about the French, the Germans, the British and the Australians, to name a few of the most important, and slammed the European Union as a trading and military partner. Indeed, he has strenuously sought to destroy the EU while befriending the so-called populist far right – the heirs of our fascist enemy. That approach to European affairs just happens to coincide perfectly with the political aims of the Russian Federation.

Meanwhile, Trump has abandoned longstanding U.S. policy on human rights, not only committing violations on our border but also encouraging dictators around the world. Within the space of a few days this year, he berated the Canadian prime minister, our friend and ally, while praising the murderous dictator of North Korea. Maybe that was just crazy, or maybe it was something else.

At home, Trump never stops promoting the same divisive themes that pollute our political system, courtesy of the Russian bots sent by his friend Vladimir Putin.

For some reason, Trump won’t allow anyone to record his meetings with Putin. Perhaps he doesn’t want anyone to hear the Russian dictator expressing appreciation for his long campaign to undermine the FBI counterintelligence division, which exists to thwart Kremlin espionage. But then, Trump has sought to discredit and disorganize the entire intelligence apparatus of the United States, most recently with his attempted appointment of a lunatic congressman from Texas as the director of national intelligence.

Putin must also be quite grateful for Trump’s systematic effort to destroy American diplomatic capacity, by appointing non-entities to run the State Department while leaving half of its posts unfilled.

Like the trade war that is decimating our agricultural sector – among the most vital sectors of the U.S. economy – these recurring acts of sabotage are cited by his supporters as evidence of his “nationalism.” They are nothing of the kind. They are inflicting damage that our most determined enemies could never have dreamed possible before he entered the Oval Office.

You can tell yourself it’s all merely proof of his mental instability, his narcissistic compulsions, his ignorance and his stupidity. Or you can wonder, as I sometimes do, whether something rational and sinister lies behind this troubling pattern.

Either way, Trump is a clear and present danger to our republic.