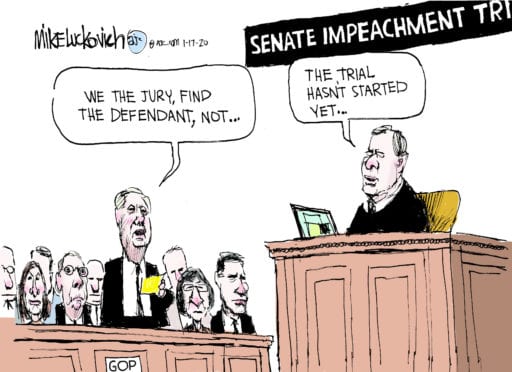 A Fair And Balanced Impeachment

When Mitch McConnell declares that the impeachment of President Donald Trump should follow the same rules and procedures as the impeachment of former President Bill Clinton, that must sound reasonable to many Americans. As the Senate majority leader puts it in his folksiest voice, “Fair is fair.”

Leave aside the fact that McConnell – who swore an oath on Thursday before Chief Justice John Roberts to do “impartial justice” in that trial – has already told us that he isn’t an impartial juror. Let’s also try to forget for the moment that he regularly bends his own supposed principles and practices for partisan advantage.

If he were to really believe that Trump ought to be tried according to the same standards as Clinton, what would he and the Senate Republicans do?

First they would require this president to undergo several hours of questioning under oath, as Clinton did before the grand jury convened by independent counsel Kenneth Starr. Surely, McConnell – and Sen. Lindsey Graham, R-SC, and a dozen of their colleagues – will recollect that Clinton spent four hours answering the questions of prosecutors and grand jurors regarding the Monica Lewinsky affair. [He had given six earlier interviews to prosecutors in other investigations.] Recorded on video, which the Republicans later released to the public, Clinton’s testimony was excerpted and played during the impeachment trial by the House managers.

Second, McConnell would demand that the president surrender all relevant documents on the Ukraine matter to Congress, along with the implicated aides and associates whom he has so far forbidden from testifying – including Vice President Mike Pence; acting chief of staff Mick Mulvaney; former national security adviser John Bolton; Secretary of State Mike Pompeo; and sundry officials from the Office of Management and Budget, the Pentagon, the National Security Council and the State Department.

Only then would the current process begin to reflect the Clinton precedent cited by McConnell. That’s because in contrast to Trump, Clinton never tried to prevent his aides from testifying in any of the investigations mounted against him and answered every document request. Owing to Clinton’s cooperation, the Office of Independent Counsel compiled and delivered a multi-volume report on the Lewinsky affair to the House Judiciary Committee, which was used by House managers to guide their prosecution of Clinton in the Senate.

Back then, as one of the House managers, Graham argued strenuously for the Senate to call three witnesses including Lewinksy, who testified on videotape behind closed doors. Like Clinton’s grand jury testimony, those videotapes were available for use in the trial, and the House managers played dozens of excerpts of Lewinsky’s testimony on the Senate floor.

Now McConnell, Graham and other Trump toadies in the Senate notoriously object to calling any witnesses in the upcoming trial. Their clear preference would be to dismiss the impeachment articles without any trial. But the Republicans know they can’t get away with any such blatant cover-up, especially with new evidence continuing to erupt into almost every day’s news cycle. [Events of the past few weeks have proved again the sagacity of House Speaker Nancy Pelosi, who outplays her adversaries at every turn.]

So those are the parameters of a fair impeachment trial, if “fair” means anything remotely similar to the trial of William Jefferson Clinton. The conditions precedent to fairness don’t exist at present, but there is nothing stopping the Senate from ensuring a balanced and honest process, except the dishonesty and partisan bias of its leaders.

Oh, and there’s one more thing: Right now, the Republican leadership is reportedly mulling heavy restrictions on media coverage of the Senate trial, provoking protests from reporters. They also have yet to consent to televised coverage via C-Span’s cameras. During Clinton’s trial, there were no impediments on the press – and the trial itself can be seen in C-Span archives to this day.

That same standard of openness must prevail now, unless McConnell wants to be exposed as a fraud from the first whack of the gavel.