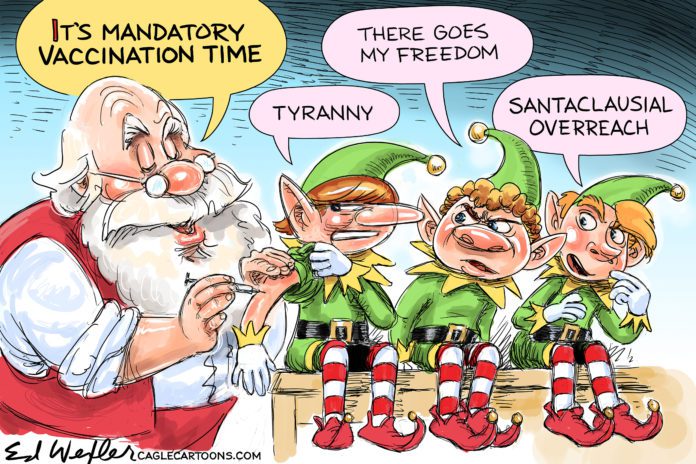 A Fair Warning To Our Warriors

The state’s new Adjutant General, Thomas Mancino, has finally spoken the truth about who is just playing “army man” versus those really in charge.

Clueless Gov. Kevin Stitt is, indeed, the commander-in-chief of Oklahoma guardsmen and women while, in fact, the Pentagon sets the rules because it pays the bills … fully 95% of the cost of our National Guard comes from Washington.

This whole tempest in a water canteen is Stitt’s fault when he gave false cover to the small percentage of uniformed Oklahomans who do not want to comply with worldwide duty requirements expected of our soldiers and airmen, including vaccine requirements against many diseases and viruses.

I took the shots for 32 years while on active, reserve and guard duty and they are no big deal. Yellow fever, the plague, smallpox, anthrax and other deadly diseases can and do kill people and I was always thankful my government did everything it could to train, equip and educate me for my assignments including duty worldwide.

Being fully vaccinated is just a small part of the plethora of responsibilities I and others like me carried out in order to stay in good standing for service to our country. It was an honor to comply, not a burden.

I fully understood that if I wanted the pay, health care and retirement benefits offered as compensation for my military service there were many things I had to do with emphasis on “had” – not “maybe” – do.

Since Stitt never wore any uniform of our state or country he may not comprehend that others more senior to him write the statutes and regulations about military duty. But Gen. Mancino does, a man I’ve known and admired for over 40 years. Mancino put on his country’s uniform for the first time in the same year I did.

Go get your shots, soldiers and airmen alike, and then get back to doing what you are required to do in the service of not Kevin Stitt, but your state and country. If you can’t or won’t do that, then you need to turn in your gas mask, military ID and base entry pass because they don’t belong to you but to your nation.

Our flag, our freedom and our Constitution will be here long after Kevin Stitt has passed from the scene of public service so to our military members I say, don’t let him mess up your public service in the defense of our nation.

Kevin doesn’t understand what’s involved in what you do, but you damn sure do.