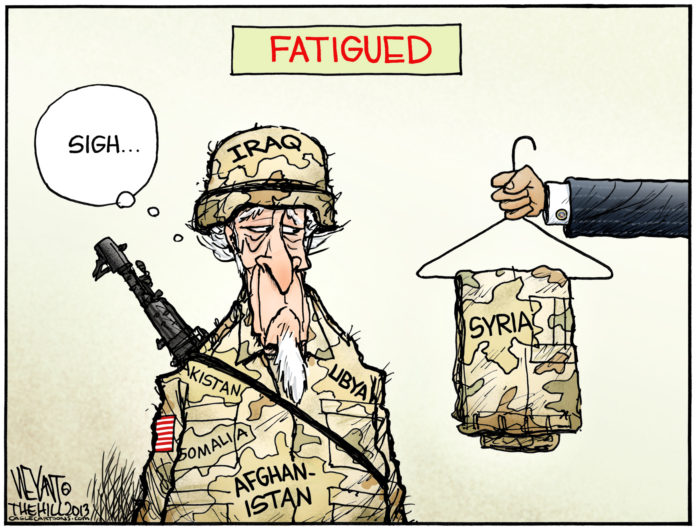 A Little Bit Of Hope

Maybe it was off the cuff, or maybe it was a calculated proposal, but I listened to the idea that there is a way out of this Syrian morass with something like real hope in my heart.

When a British journalist asked if there was anything Assad could do to avoid a military strike by the United States, Mr. Kerry said: “Sure, he could turn over every single bit of his chemical weapons to the international community in the next week – turn it over, all of it without delay and allow the full and total accounting [of it].”

Can we trust Assad to actually turn over his stockpiles? Well, obviously, we can’t trust Assad or his ally, Putin, but there has to be a non-military solution. That Mr. Kerry put one possible solution into words is enough to give me hope.

Like a lot of people, I’m torn about Syria. I trust my president, but I don’t believe war is good for our country or any other.

What if we can break this stalemate by destroying Assad’s stockpile of chemical weapons? What if Putin can convince Assad that this is a win-win for both of them? What if?

In the middle of our own uncivil war between so-called conservatives and alleged liberals, a little hope is a wonderful thing. It is just a sliver of hope, because there are too many in Washington who will slit their own throats if it makes President Obama look bad.

When hawkish Republicans will vote against a military intervention, I know it could be just a slap at the president. But I’ve seen the American people rise up, and I believe this outcry from the people may have as much to do with the lack of support for striking at Assad as anything else.

Here it is, our representatives afraid to commit us to air strikes because they don’t want to displease constituents when there’s an election coming. This is democracy at work.

Can anything be more hopeful than that?