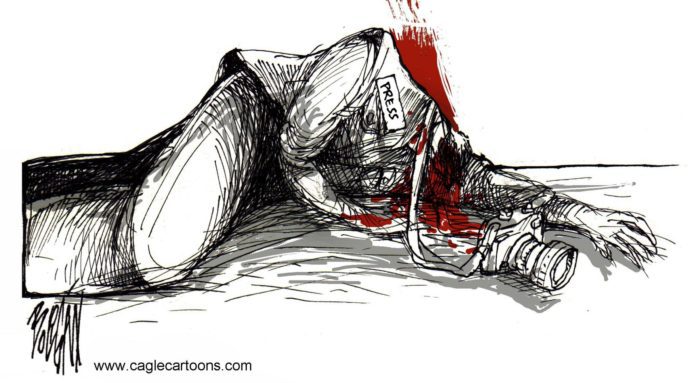 A Reminder To Remember

On Monday, in Washington, DC, a group will stop and remember what we all would like to forget – but should never put out of our minds.

Journalists, family members and others will gather for the annual rededication of the Newseum’s Journalists Memorial – a wall of soaring metal and glass, containing more than 2,200 names of reporters, broadcasters, photographers and others who have died in the pursuit of news since 1837.

The listing is incomplete, of course – reliant as it is on available records and on how international organizations of journalists classify and track those killed in the line of duty; and most recently, because of the vexing issues surrounding the very definitions of the words “journalism” and “journalist” in an era when traditional media coexist with new technology and differing approaches to newsgathering around the world.

But what counts is the mission of the memorial – as Newseum founder Al Neuharth said in 1997: To remind the world that journalism is a dangerous profession.

Some 18 years later, the danger is even greater, as journalists have gone from being seen by all sides as necessary tools for communicating with the world to – in a total shift – a threat to crafted stories that can be sent, via the Internet, directly to the public.

The stories of individual journalists whose names will be listed in the memorial will forever be representative of all of those in the profession who faced that greater threat, including those who lack traditional credentials but not the modern journalism’s tools of the trade: access to the Internet, mobile phones and video, as well as text.

From the Arab Spring to the Ukraine, from the Middle East to Southeast Asia and South America, danger stalks journalists on assignment from major newspapers and networks; freelancers are caught up in the mindless violence of conflict zones; and broadcasters return to work daily despite threats and intimidation from drug lords, political critics and sometimes their own governments.

The Newseum Institute’s First Amendment Center samples adult opinions in the United States each year for its annual State of the First Amendment survey. Since 1997, the survey has asked questions about the public’s view of the news media – about bias, about the “watchdog” role over government envisioned by the nation’s founders, and even about the media’s position as a source of basic news.

The “news about the news” clearly is not positive, and this year’s survey – to be released around the July Fourth holiday weekend – won’t bring any joy to journalists hoping such negative views are receding. But those sweeping opinions ought not to obscure the straightforward facts that international journalism groups documented more than 80 journalists of every type who died in the line of duty during 2014.

We also should not forget journalists worldwide who are being held in prison by vindictive and cowardly governments, or as captives and political pawns by venal, evil groups. We saw this in 2014 – with the deaths of American journalists James Foley and Steven Sotloff at the hands of ISIS thugs – how tragically such captivity may end.

Washington Post journalist Jason Rezaian is charged with espionage, and is on trial in a secret session in a closed Tehran courtroom set to resume on the same day as the rededication, more than 10 months after he was imprisoned. Rezaian’s supporters insist he simply was working as a reporter. The trial was “continued” to a later unspecified date for undisclosed reasons – and even that news was not officially announced, but came by way of Rezaian’s lawyer to his family members.

In fact, the importance of the Journalists Memorial is not in the names it lists nor the individual stories it helps tell – but that it exists, day after day, as a reminder to millions of visitors over years past and to the many who will see it in the future. In that effort, the memorial stands alongside international journalism groups, families and individual newsrooms whose ongoing work refuses to abandon colleagues and loved ones to either jail cells or indifference.

Associated Press senior vice president and executive editor Kathleen Carroll, in a discussion a few months ago at the Newseum, may well have defined the role of the memorial as reminding us all that “this work that people are doing at great risk is to educate you, so give a damn. Read the paper. Read on your tablet. Engage the news and be a citizen of the world.”

Please do “give a damn” – on Monday and every other day.

– Gene Policinski is chief operating officer of the Newseum Institute and senior vice president of the Institute’s First Amendment Center. He can be reached at gpolicinski@newseum.org.

The 2015 rededication of the Newseum’s Journalists Memorial will be live streamed at 10 a.m. ET, Monday, June 8, at newseum.org.