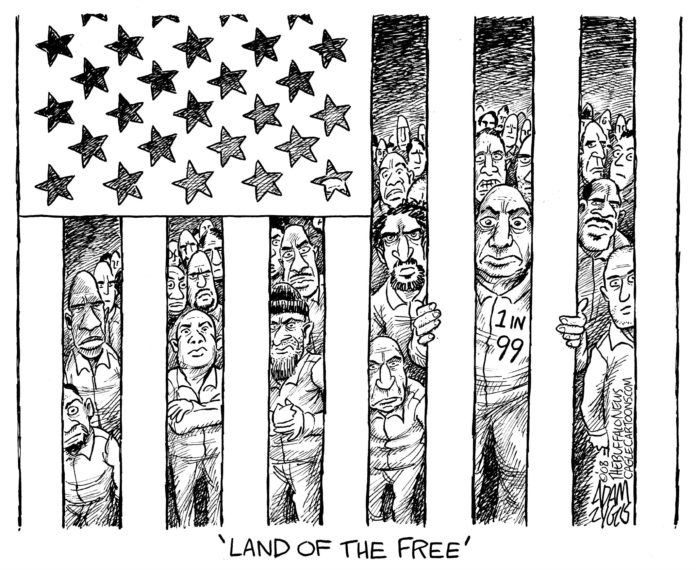 Ever visit a major prison? The vast majority of Americans have not, despite our country having by far a higher incarceration rate per capita than China or Iran. Out of sight is out of mind.

Imagine the benefits of the average taxpayer touring a prison. The lucrative prison-industrial complex would definitely not like public exposure of their daily operations. Prison CEOs have no problem with a full house of non-violent inmates caught with possession of some street drugs [not alcohol or tobacco]. Our horrendous confinement system cannot change when it clings to perverse practices such as cruel, costly, arbitrary, mentally destructive solitary confinement [again, the highest in the world, see: http://solitarywatch.com/]. Corporate profits drive the prison system’s insanity.

Indeed, for the giant Corrections Corporation of America [CCA], times are booming. CCA builds their prisons or buys or leases public prisons from financially strapped governments. Barron’s financial weekly can always be expected to give us the Wall Street perspective. In a recent article titled “Ready to Bust Out,” writer Jonathan R. Laing [http://online.barrons.com/article/SB50001424053111903882904577477001345171564.html] is bullish on CCA stock. He thinks it could double to more than $50 a share if the company were to convert to a real estate investment trust [REIT].

Mr. Laing writes that CCA has cost advantages over the public-prison sector, paying lower non-union wages and using more automated technology. Besides, the company is a tough bargainer when it buys or operates public prisons. One CCA condition is that the facility must have 1,000 beds, can’t be more than 25 years old, and get this, “the contract must guarantee a 90 percent occupancy rate.” A guarantee backed by taxpayers no less, unless, that is, the clause works to put more prisoners in jail for longer sentences.

The Barron’s article adds that CCA is counting on “the old standby of recidivism to keep prison head counts growing, filling its empty beds.” To the impoverished rural communities where these prisons are located, it’s about needed jobs.

The criminal injustice system has many faults, other than an inadequate number of beds filled with convicted corporate crooks. As the Justice Roundtable [http://justiceroundtable.com/], composed of a collation of over 50 national organizations, declares, “The current punitive system depletes budgets without making society safer … The archaic system must be reformed to be rehabilitative, just and accountable.”

How naïve! Don’t these experienced people know that first they have to change the purposes of this system? Instead of wanting more prisoners and treating them in such ways that when they get out they are too unskilled and damaged to overcome the society’s exclusionary pressures that half of them end up back in jail, they should be training these prisoners to be contributing members of society. But that’s the problem of the gigantic prison machine that thrives on returning prisoners.

The same perverse incentives apply to the self-defeating trillion-dollar war on drugs [see http://www.drugpolicy.org/]. History has demonstrated that driving addictions into illegal undergrounds creates vicious underworld crimes. In Mexico, the so-called drug cartel is getting close to destroying local governments in many regions.

In the U.S., half a million people are behind bars for nonviolent drug offenses, the vast majority arrested for mere possession, not production or sale. That is nearly one in four of all prisoners. There are 20 million marijuana arrests every year in the U.S.!

Drug addictions are treated as crimes instead of as health problems, which we do with tobacco and alcohol addictions. Gross racial disparities persist, starting with black teenagers having to go to jail for a drug offense six times more often than a comparable white youth, both with prior clean records [http://www.nyclu.org/content/commission-must-reform-inhumane-drug-laws].

Without rehabilitation changes in prisons and changes in societal attitudes toward those who have done time, ex-prisoners will continue to have trouble getting jobs having food stamp eligibility, financial aid for college or vocational schools and even the right to vote.

In the first ever congressional hearing on solitary confinement, led by Sen. Richard Durbin, D-IL, last month, the Senate Judiciary Committee’s Subcommittee on the Constitution, Civil Rights and Human Rights received testimony about and directly from wrongfully convicted prisoners put away in “the hole,” as solitary has been called for years.

They also heard from Christopher Epps, the boss of the Mississippi prison system, one of a few states that, in the words of The New York Times, “ha[s] reduced prison violence and reaped millions in budgetary savings by steeply cutting back on solitary confinement.”

From the lethal drug wars on our city streets to the crowding out of civil cases from the federal and state dockets clogged by these drug cases, to the blocking of proven, superior ways to deal with the entire problem by innovative judges, thoughtful scholars and prominent advocacy groups, the time is ripe for change.

Right/Left convergence is emerging. Last April, for instance, David Keene, former chair of the American Conservative Union, and Grover Norquist, president of Americans for Tax Reform, joined with the NAACP and other liberals to highlight escalating levels of prison spending and its impact on our nation’s children and poorly performing schools.

Connecticut spends $40,000 a year to imprison a juvenile offender compared to less than $12,000 a year to educate a young person. Other similar convergences over hugely disparate sentencing as with crack and cocaine are forming, making both economic and humane arguments. More young black men are locked up than are in college, according to the Justice Roundtable.

Start up the prison tours. Have some led by articulate, former convicts who are pushing to reform our cruel, costly and ineffective prison system. It is so easy to do much better, if we want to.