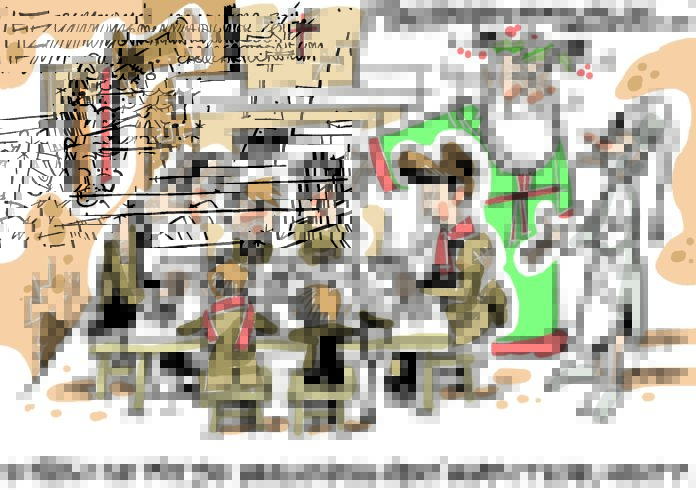 My first year of teaching was in a tiny elementary school, where I was one of the two sixth-grade teachers. My shiny English teaching license didn’t get me a job, so I taught my first of four years with an emergency certificate … but that’s a story for another time.

I was not a very good math and science teacher [read woefully unprepared! If only I could have related them to Irish playwrights of the 20th Century!], I could have been a good social studies teacher if the textbooks actually referred to countries currently on the map. But I rocked reading and grammar.

In December I decided to share A Christmas Carol as my after-recess read-aloud. My little Indiana farm kids didn’t have Mr. Dickens’ vocabulary, so I revised a lot as I read. The last day before break was a quiet one, with kids finishing their crafty presents to their parents, and I read nearly all day. When we finished the book, and I read, “And so, as Tiny Tim observed, God Bless Us, Every One!” There was a silence, and then, to a child, they clapped. I was permanently hooked on kids from that moment as we shared that universal moment of being moved by literature.

I’ve been thinking a lot about Scrooge recently, as we learn how the economic policies of our state leaders are playing out. Rick Cobb has analyzed the situation better than I ever could here and here. Rob Miller adds his own insights here and here. We in #oklaed are so lucky these two educators are on our side.

The Spirit of Christmas Present lets Scrooge peek into the homes of people enjoying their Christmas Eve, without his wealth, but without his angry heart. He marvels, but is not yet touched. But he also shows Scrooge strangers who struggle. Then he puts faces onto that struggle as he reveals two innocent children.

He pulls his robes back and there are Ignorance and Want, “… a boy and girl. Yellow, meagre, ragged, scowling, wolfish; but prostrate, too, in their humility … ” Looking into their eyes, their tired, old eyes, Scrooge recoils. The Spirit’s words warn us all: “This boy is Ignorance. This girl is Want. Beware them both, and all of their degree, but most of all beware this boy, for on his brow I see that written which is Doom, unless the writing be erased.”

We have seen the work of modern-day Scrooge and Marley – yes, I know. “Marley was dead: to begin with. There is no doubt whatever about that.” But we have at the Oklahoma Capitol Senate President Brian Bingman and Sen. Clark Jolley and Finance Secretary Preston Doerflinger. Spinning our troubles with maniacal fervor.

They spoke about our $900 million hole, on its way to being a $1 billion …yes, billion.  Mr. Doerflinger called it “an opportunity.” Said it’s not as bad as other years, and blamed OPEC, not the failed policies of his own party. Brushing off any sense of responsibility to the people of Oklahoma.

House Speaker Jeff Hickman talked about our schools … He again asserted they “ … have more money to spend than they ever had.” And more students – he ignored that fact. Those Ignorance and Want students who need so much from us. He told us our teacher shortage is just a reflection of a national trend, hinting that the abysmal teacher salaries are not the problem. He swiped at districts for not putting all that money into teacher salaries: “ … those dollars haven’t gotten to where they needed to go.” He must not have paid a bill recently … prices are going up. Maybe because schools were required to pay utility bills and buy new computers and bandwidth to support the mandated testing, and the tests.

His disingenuous posturing does so remind me of Scrooge: “Are there no prisons? Are there no work houses?”

Sen. Jolley piled on with the same message – districts have more money than they’ve ever had … and tried to brush off the evidence that Oklahoma leads the nation in cuts to education. He ignored evidence that Oklahoma has the second highest enrollment among regional states, and we spend the very least pupil.

Scrooge and Marley and Friend … blaming their policies on OPEC and teacher insurance. Steadfastly ignoring our children, Want and Ignorance and all their classmates.

Scrooge and Marley and Friend, brushing deep cuts to  schools and other services to children off with a dismissive gesture … “are there no work houses?” They seem to want their tax cuts and their tax credits. They want their ESAs and our vouchers. They want our for-profit charters. Our children will have to wait.

Our governor is planning to let the tax cut in January occur on schedule, costing the state another $147 million dollars: “Once the price of oil rebounds, I am confident this tax cut will prove its worth in the long term.” And Want can languish with Ignorance until that time comes, I guess.

Scrooge can blithely ignore the effects of poverty and ignorance when it’s abstract. But, like most of us, when face-to-face with “ … wretched, abject, frightful, hideous, miserable …” children who suffer, not because of their own actions, but because of the actions and neglect and abuse of others … adults, policymakers, decision-makers, he cracks.

Our Scrooge and Marley and Friend doubled down and looked Oklahoma in the eye and told us our kids and their futures are not as important as a tax cut for the rich, and tax credits for the oil industry. The tax cuts will go forward. Want will continue to want. The attacks on our public schools will continue. Ignorance will continue to threaten us all. Will our policymakers listen?

In the novel, Marley learns … in death, but he learns. He saves Scrooge before it’s too late.

Mankind is our business. The common welfare, charity, mercy, forbearance, and benevolence…care of our youngest and most vulnerable. Not because we can score political points, but because they need us.

Our children are our business. The well fed children, and Want. The bright and warm and Ignorance. They are all ours and it’s past time for us to act like it.

Merry Christmas … and God bless us, every one.

– Claudia Swisher, a National Board Certified Teacher and regional coordinator for Education Leadership Oklahoma, lives in Norman, OK and is a frequent contributor to The Oklahoma Observer.

Previous article
The Tradition Of Charity
Next article
Revolt Against Corruption