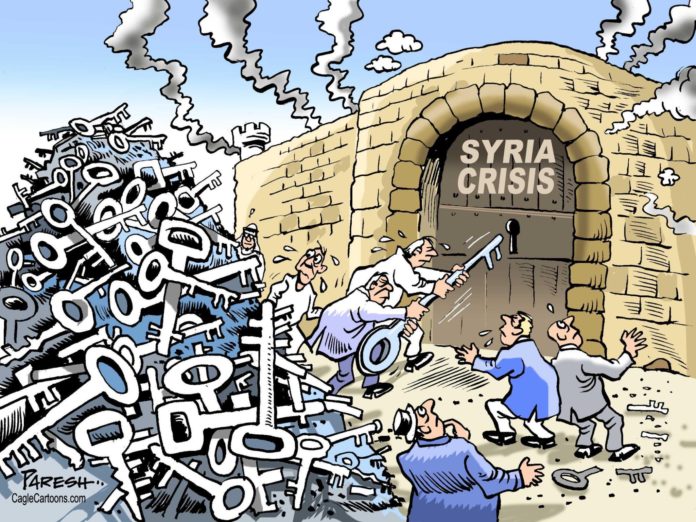 Anthony Shadid, called the “most gifted foreign correspondent in a generation” by his then Washington Post colleague, Rajiv Chandrasekaran [author of the widely heralded book Imperial Life in the Emerald City], didn’t really need a byline. For anyone who knew of his peerless, unique reports from the Middle East would read them and just know they were a Shadid special.

Alas, there will be no more Shadid reports and features from the streets, alleys, souks, homes, hospitals, workplaces and cultures of the Arab countries. For on an assignment from The New York Times in a dangerous, mountainous area of Syria last week, this humble, brilliant, nuanced, generous, honest, brave double-Pulitzer-Prize winner [with another one likely on the way] died from an apparent asthma attack together with severe allergic reactions and exhaustion.

Mr. Shadid, only 43, with by a wife and two children, never wanted to be a war correspondent embedded in the U.S. military invasions and attacks of these countries. Fluent in Arabic, he wanted to be free to find out what was going on in the Arab communities throughout the Middle East and communicate the truth to the American people and the world.

This son of Oklahoma by way of the University of Wisconsin Journalism School did just that, for more than 15 years in the tumultuous Arab world from North Africa to West Asia. As Rajiv Chandrasekaran wrote, “His coverage of the Middle East – from Iraq, Lebanon, Libya and beyond – was, simply, the best. He set the standard. If you cared about the region, if you really wanted to understand what was going on, you read Anthony. If you were in his presence, as I was – we were fellow correspondents and housemates in Baghdad – you watched his performances with the awe usually reserved for basketball stars and violin virtuosos.”

The Pulitzer Board’s encomium in 2004 cited Mr. Shadid for “his extraordinary ability to capture, at personal peril, the voices and emotions of Iraqis as their country was invaded, their leader toppled and their way of life upended.”

He not only went into areas fraught with danger, he also paid the price. In 2002 while covering the Israeli assaults in the West Bank for the Boston Globe, he narrowly escaped death. His photographer and colleague, Michael Robinson Chavez described the scene, “We were in Ramallah. A shot rang out and a piercing scream echoed through the deserted streets. I saw a Palestinian helping a wounded man. It was Anthony. Israeli Defense Forces had shot him in the neck.”

Last year in Libya, Mr. Shadid, photographer Tyler Hicks, and two other Times journalists were seized by pro-government militias and incarcerated for a week of fear, physical abuse and hair-trigger threats before being released only to learn that their driver had already been killed.

Mr. Shadid’s writings invited the ire of the Mubarak police when he was in Egypt during the Arab Spring, and he was a wanted man by the Syrian regime, which made his last assignment by The New York Times via smuggler-guides not exactly a prudent managerial decision.

No one with such compassion, sense of history, culture and love of peace could hide his feelings better than reporter Anthony Shadid did. In the report on his loss in the Times, Rick Gladstone wrote of Shadid’s “elegiac prose.” Gladstone wrote, “In the opening of a new book, House of Stone, to be published next month, he [Shadid] described what he had witnessed in Lebanon after Israeli air assaults in the summer of 2006:

‘Some suffering cannot be covered in words. This had become my daily fare as a reporter in the Middle East … In the Lebanese town of Qana, where Israeli bombs caught their victims in the midst of a morning’s work, we saw the dead, standing, sitting, and looking around. The village, its voices and stories, plates and bowls, letters and words, its history, had been obliterated in a few extended moments that splintered a quiet morning.”

Of course, Mr. Shadid would not mention that his ancestral village was not that far away from this recognized [even by Israelis] war crime on Qana’s civilians. He would hold back any feelings in his subsequent writings with a stiff, professional upper lip.

The extended Shadid family in Oklahoma comes from a background of pioneering achievement in America after overcoming great tragedy back in what was then greater Syria. From the village of his forebears, Marjayoun, came a stream of immigrants. One was a teenager, Michael Shadid, who escaped the historic famine of that time, during the Ottoman Empire, which took the lives of his six siblings.

He started as a youthful peddler, caught the eye of a dean at Washington University in St. Louis who encouraged him to go to college and then medical school. He chose to practice in the impoverished farm country around Elk City, OK and in 1929 started the first pre-paid cooperative hospital in the country, wrote and toured the nation promoting the virtues of prepaid medical care. His indefatigable work was a precursor of the Kaiser and Puget-Sound prepaid health care plans.

Anthony Shadid’s managing editor at the Washington Post, Phil Bennett, who worked closely with him, summed up why there has been a remarkable outpouring of heartfelt accolades [see his New York Times website] from his colleagues. “He changed the way we saw Iraq, Egypt, Syria over the last, crucial decade,” Mr. Bennett declared. “There is no one to replace him,” he added sorrowfully.

Mr. Shadid’s legacy will be illuminated and rooted in forthcoming awards and honorary fellowships. But his most personal, lasting contribution will be how his writings and his ways of finding and comprehending the story elevated the standards of his profession for those young journalists who will follow him along with the readers they will enlighten.

[Interested readers may wish to see further commentary on Anthony Shadid by visiting http://www.nytimes.com/interactive/2012/02/17/world/middleeast/Anthony-Shadid-Remembrance.html#/all and http://www.washingtonpost.com/local/obituaries/correspondent-anthony-shadid-43-dies-in-syria/2012/02/16/gIQAo2NyIR_story.html?hpid=z2]

Editor’s Note: The New York Times link is no longer accessible without a subscription.