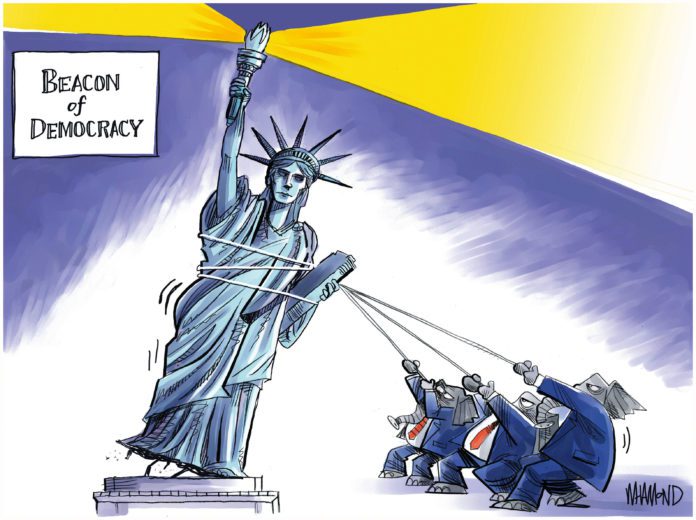 On a recent night of perusing the AM radio dial, I alit on a propheteering preacher railing about today’s “decadence,” and comparing it to the immorality that wrecked the Roman Empire.

I have heard that platitude for more than 60 years. But the arc of history of the United States over the past 100 years more closely follows that of Athens of the 5th century BCE than that of the fall of Rome.

For starters, the height of Roman decadence came early in the empire with the Julio-Claudian family – Caligula, Claudius and Nero, the last relative of Julius to rule, who died in 68. The empire in the West fell in 476. The empire in the East survived until 1453. First century decadence really cannot be linked to those events.

But we can compare the Athenian victory at Marathon in 490 BCE to World War I and the combined Hellenistic defeat of the Persians 10 years later to World War II.

In both cases, the removal of an outside threat turned unified, concerted energies toward the betterment of the state, unprecedented prosperity and imperial constructs that carefully avoided the use of the term “empire.” With Athens, it was the quasi-religious Delian League. With us, it was our status as a superpower dedicated to thwarting the evil Soviet superpower.

While both empires were sources for considerable wealth flowing back to the homeland, they also led to an arrogance that resulted in unwise interventions in the affairs of others.

And both were subject to internal dissension as reactionaries saw the general prosperity and the rise of “lower” classes and feared that this might be at their expense.

In Athens, during middle of their golden age, while they were rebuilding the monuments on the Acropolis destroyed by the Persians [a tremendous public works project that employed many], the leading intellectuals were known as Sophists, which translates either as “wise men.” Many were foreigners who arrived in Athens as diplomats from their city-states and who stayed because of the free flow of ideas in that ultimate democracy.

The trouble with travelers is the stories that they tell of the places they have been and the different customs that cast doubt upon our home as the source of all value, wisdom and gods-given truth. Sophist relativism saw the brotherhood of man beneath our various customs. Not barbarians and Greeks, but, by our natures, the same and totally changeable to meet the circumstances.

The first and most famous Sophist, Protagoras, compounded this relativism with his observation that, “Man is the measure of all things.”

They became teachers. At a time when individual participation in government was at its height, expressing oneself was a key to success. Thus, with their diplomatic backgrounds, the Sophists taught rhetoric, how to win court cases and influence people.

Their credentials consisted of their success in representing their home countries. Their “sin” was that they practiced education and individual thought and not indoctrination.

A supposed condemnation of the Sophists charged them with teaching both sides of an argument instead of arguing for the truth. But when citizens themselves served as prosecutors [a la Socrates’ trial] or defendants, a well-schooled Athenian would need to know both skills.

Sophists were practical. They were the heirs of Heraclitus and his eternal flux, which requires a constant modification of one’s actions to deal with changing times. One must be flexible to ride the flux.

Ah, but such flexibility deprives dogmatists of their authority. In Athens, according to Plato’s accounts, it was Socrates who engaged the Sophists and their democratic followers in the marketplace, subverting faith in city leaders while advocating a pie-in-the-sky idealism that necessarily collapses under its own inanities.

Sophists recognized the flux that Plato found so scary. They were shamans of progress; he was conformity’s priest, thwarting civilization for more than 2,000 years and still stifling us today.

But Plato’s dialogues survive and all we have left of the Sophists are remarks cherry-picked by Plato and other opponents in order to criticize them. As with any dogmatist, Plato hated free-thinking for the dangers that it posed to his absolute system. Self-examining Sophists, probing sketchy reasoning, had to be discredited.

Still, even the quotations chosen to put Sophists in a bad light can be interpreted favorably by non-Platonic eyes.

Another challenge to old school conformity in Athens came from Anaxagoras, a thoroughgoing materialist who served as an advisor to Pericles, the leader of Athens in its glory. Charged with “impiety” because he declared the Sun to be red-hot metal and the Moon of the same substance as Earth, while also espousing a form of atomism, Anaxagoras was forced into exile. Protagoras, facing similar charges, had died at sea fleeing Athens for Sicily.

[Contemporary with Socrates, the main exponent of atomism – at a time when the only tool he had was thought experiments – Democritus is famous saying he was ignored when visiting Athens. And Plato dared not address any of his pronouncements.]

So, the Periclean Golden Age relied heavily on education, free-thinking, the scientific insights of its time and an acceptance of outsider, even international ideas. And after one of the most glorious eras in history, recalcitrant reactionaries tried to re-impose their straitjackets on Athenian minds and bodies.

Fast-forward to the end of World War II and we see a GI Bill extending educational opportunities farther than ever before; the arrival in this country of scientists, scholars and students from throughout the world to enjoy the fruits of our academic freedom and the country as a whole rejecting the isolationism that led to the two world wars. We wanted the United Nations here as a recognition of the global solutions necessary to maintain some semblance of world stability.

Massive infrastructure efforts such as the interstate highway system demonstrated our commitment to national growth as well.

But free-thinking and foreigners still frighten a large part of the populace. And the authoritarians among us are just as jealous of their prerogatives as old Athenians.

Thus, we now have advocates of political interference in educational institutions – with some in power to demand indoctrination, not education.

Science, particularly medical science, faces challenges from those more concerned with protecting their power than the people they supposedly represent.

The forces of backwardness also embrace a xenophobia unbecoming to a nation of immigrants. American bigotry as expressed by the past president and demonstrated by his followers not only tries to marginalize the “different” among us [including those with a longer heritage of occupancy], but discourage the best and brightest from other countries from joining their talents with ours.

And, as is always the case with the “we’ve got ours; too bad for you” crowd, investment in anything that doesn’t put money directly into their pockets is anathema.

Yeah, the Republicans talked “infrastructure” for four years without a plan and then voted against basic maintenance projects.

All of this anti-progress is abetted by lying, misinforming hate-mongers in the name of the free speech they would deny others.

Things did not end well for 5th century Athens. Socrates’ great pupil, Alcibiades, turned out to be the biggest traitor since Ephialtes at Thermopylae. Then, after Athens’ ultimate defeat in the Peloponnesian War, the Thirty Tyrants persecuted democratic political enemies. Many of these tyrants were young associates of Socrates, including relatives of Plato, a Spartan sympathizer whose Republic advocates rigid authoritarianism.

The Athenians regained their freedom, though never their previous influence, and some might conjecture that Socrates’ “martyrdom” resulted mainly from his career of undermining Athenian democracy as opposed to Plato’s hagiographic accounts.

Americans still have a chance to avert a narrow-minded, narrow-prospect autocracy. But it will require an inclusive open-mindedness that Republicans seem to be incapable of at present.

Previous article
Elf On Congressional Shelf
Next article
Oh, What A Tangled Web …