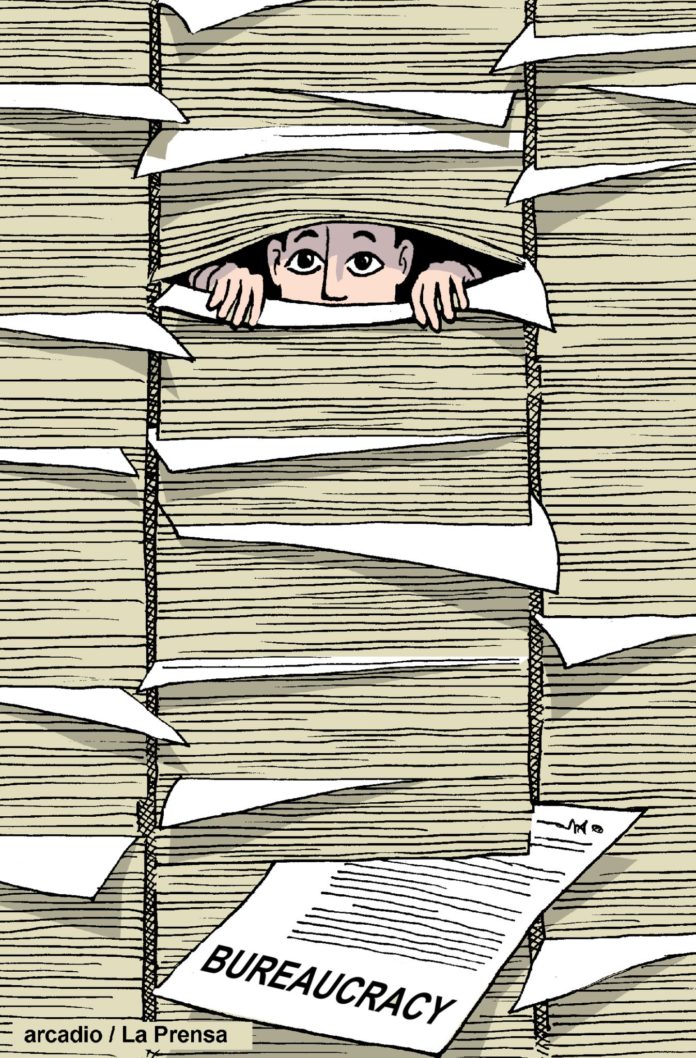 Winners of the Red River Rivalry change from year-to-year. But Oklahoma is the hands down winner when it comes to registering a vehicle or getting a driver’s license if you’re from out-of-state.

“Everything is BIG in Texas!” And they are right when it comes to the state’s awkward bureaucratic paper shuffling Texas Two Step where out-of-state drivers are concerned.

We anticipated our move to South Texas with excitement at beginning a new chapter in our lives.

In preparation, we made a list of things to do to become Texas residents. One of the first was to register our car and get Texas drivers’ licenses.

Simple matter right? We go to a tag office; hand over our Oklahoma registration and drivers’ licenses pay the required fees and become licensed Texas drivers.

Little did we know how complicated this process would be. We soon discovered a relatively simple task would become a bureaucratic paper shuffling nightmare.

It all began with an inspection of our vehicle. The inspection checks the horn, lights, turning signals; all the usual safety features.

After the inspection, a sticker was placed on the windshield, I was handed the completed inspection form to be shown when I registered the car and paid the $15.50 inspection fee. By the way, the inspector did not check my lights, horn etc.

Next stop: A county branch office to register the car and get our license plates. Two glass fronted stations were available: One for the municipal court, the other for everything else. We lined up for the everything-else-window that looked like a toll both with a slide under tray to collect papers and money.

We finally reached the intrusive glass station through which little could be understood or heard, and presented our documents: Newly acquired inspection receipt, Oklahoma registration, Oklahoma drivers’ licenses and insurance verification. The office manager looked over the papers not once, but several times as if he had never seen anything like them before. He shuffled them. We explained [as best one can through heavy glass even though built in speakers were on the sides] we were new residents and needed to register our car in Texas. This, of course, should have been obvious, but I felt the need to explain why we were standing at his everything-else-window.

More shuffling of papers and examination of the documents I had presented through the slide under tray.

“You need to fill out this form then get back in line,” he said as he passed it under the glass partition.

The form had the usual boxes: Name, address, former address. Meanwhile, the line had grown by three more people. Completing the form, we returned to the line and waited. Finally reaching his window, I passed the completed form through the tray. The manager looked it over; then he examined the other documents we had already given him, looked back at the completed form, and then looked at the documents again. Noticing both our names appeared on one of the documents [Oklahoma registration]; he asked for proof of our relationship!

“What?! I don’t carry my marriage license around with me,” I said somewhat irritated.

He shuffled the papers some more, looked at them some more, then evidently enlightened he decided we were related in some manner since both our names appeared on all the documents.

“What’s your new address? Do you rent this place or own it?” he asked.

Taking a deep breath to calm my response [my wife who is always the epitome of patience even let out a disgusted sign and rolled her eyes], I replied: “I checked the appropriate box on the form.”

More shuffling and examination of papers.

After more inane questions I was able to assure him we did own the property and we were in fact trying to establish residency in Texas.

After more shuffling of papers and examining the documents, he reached for two Texas license plates [Yes! We’re about finished!]. Enfolding the plates with documents and a rubber band, he slid the package under the glass.

Grabbing them, I thanked him and we ran out the door jumping and shouting at finally completing Phase 2 of the most complicated process we’d ever encountered. Little did we know that our test of patience was not over.

Walking into the Department of Public Safety building [there is only one], we saw people EVERYWHERE; sitting in every available chair, standing in a line that stretched from the front desk along a wall to the back of the large room. The desk at the entry was a distribution center for passing out more forms.

Again, proof of residence, proof of relationship, proof of live birth, proof of birth date, proof of Social Security number, proof of a valid drivers’ license and other seemingly nonessential [and duplicated] information was needed.

We mentioned that we both had government issued passport cards [credit card type passports instead of the usual booklet passport]. Because birth certificates, Social Security numbers and other required documents are needed to get passport cards [or a passport], we thought these would be sufficient identity proof and we wouldn’t have to return home for more. The passport cards wouldn’t do it, we were told.

Another trip back to our new residence to get the required documents, I also included our marriage license, my parents’ death certificates, my father’s Social Security card and anything else I thought might be needed, including my ancient baby book.

I didn’t take the first tooth I lost, thinking surely the Texas DPS wouldn’t require a DNA sample from my early youth to prove I was who I said I was. Of course that didn’t rule out the possibility a blood or urine test.

After presenting all our documentation, we were given a number to wait being called. The calls came and we went to our assigned sites where more questions were asked about residence, age, birth date, relationship. My wife mentioned she had a passport card and an asked if that would suffice as proof of her identity. Yes, she was told, a passport card would be fine. Huh? Why didn’t the first person say this and I wouldn’t have had to rush back to get all the documents?

FINALLY! After an entire day of trying to get our car inspected, registered and our driver’s licenses, the usual goofy looking pictures were taken and we were legally licensed Texas drivers.

The kicker? Instead of getting a true driver’s license, we each were given an 8 ½ x 11 sheet of paper with the DL info [including goofy picture] as our temporary driver’s license until we got the real one in the mail in about two weeks!

Whew! This was more trouble than the militaristic Caribbean island we visited many years ago where we weren’t asked a bloody thing except to show a form of ID which happened be our OKLAHOMA drivers licenses.

– Norm Rourke, a regular contributor to The Oklahoma Observer, recently moved from Beggs to Texas’ Rio Grande Valley, near the Mexican border where he wintered for several years