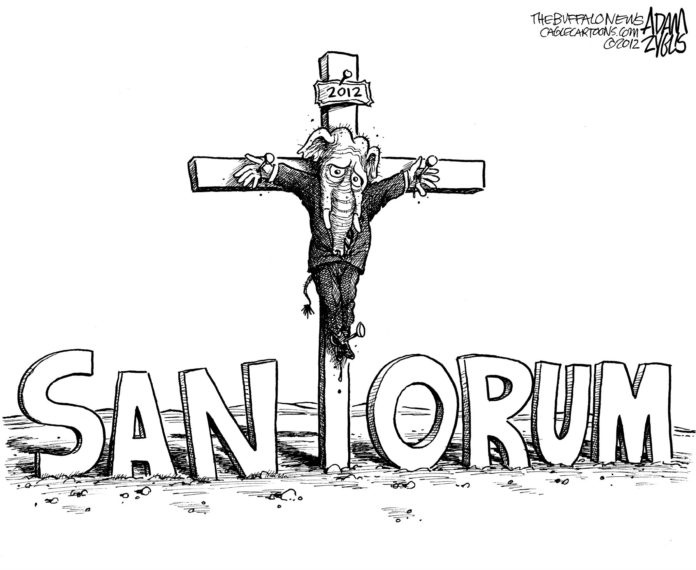 During the John F. Kennedy-Richard Nixon face off Nixon won 59% of the vote in Oklahoma. Kennedy only carried 17 counties in the southern part of the state.

At that time evangelicals openly worried and warned that the Swiss Guard would replace the FBI, fish would be mandated on Fridays and many other absurd conjectures. Now, two Catholics on the ballot, Santorum and Newt Gingrich, and none of the evangelicals seem worried.

Santorum seems to wear his Catholicism on his sleeve much more than Gingrich. While he never actually says he represents the Roman Catholic Church there is the inference that his social outlook is driven by his Catholicism.

Gingrich, on the other hand, tends to leave his Catholicism at the door, except when it suits him on abortion and birth control.

With that distinction made, one can now turn attention to Super Tuesday and the continuing Republican roadshow.

The national focus will be on Ohio. Veteran observers, pundits, soothsayers and seers want to know if Mitt Romney can quit wandering from shoulder to highway shoulder and stay in the same lane all the way to Tampa.

This group also wonders if Santorum’s claiming the moral and spiritual high ground while “misstating” facts about every social activity with which he takes exception has Tampa traction. They also wonder if Pope Ricky will have to hock the family silver to stay in the race.

The third candidate, if he can still be called a candidate, Gingrich seems to be running out of money, steam and friends. The exception is Georgia where he is expected to win handily.

Candidate Ron Paul remains on the ballot simply because he won’t go away. He has many ardent supporters but apparently not enough votes. He may, however, be a spoiler as he goes about concentrating on delegates and not elections.

With all this said, as Super Tuesday thunders across the calendar it may well be that red state Oklahoma with 43 delegates is where the real primary fun is to be had.

After all, President Obama failed to carry a single county in the last presidential election. Oklahoma has 77 counties.

The most recent polling data published in February shows Pope Ricky leading the pack by 20-plus percentage points. This is a complete reversal of public opinion from a month ago.

An early February poll had Gingrich ahead with 34%, Romney in the middle with 31% and Ricky was third with 16%. Paul had a firm grip on fourth place with slightly over 7%.

In less than three weeks the winds of fortune had changed. Ricky had bolted from the pack with 41% leaving Romney and Gingrich tied at 20.5% and 20%, respectively. Paul, still in the single digits, remains unchallenged for fourth place.

Pope Ricky’s rise in popularity should not come as a surprise considering: The Oklahoma Legislature passed a vaginal sonogram law last session, which is now being challenged in the courts.

Voters approved an anti-Sharia law during the last election, which is now being challenged in the courts.

The Legislature had previously passed a sweeping immigration bill, which is now being challenged in the courts.

The current Legislature is preparing to pass a “personhood” bill, which will most assuredly be challenged in the courts.

The Legislature often laments there is no money for education. They do, however, seem to have plenty of money to spend in court.

Introduced but not expected to get out of committee is a bill prohibiting the eating of fetuses.

A House committee just passed out a handgun open carry bill allowing anyone who has taken the “concealed carry” course to openly sport their weapons. The concealed carry course is tantamount to mailing in breakfast cereal box tops. Interestingly enough, there is no provision requiring weapons carriers to obtain liability insurance. Insurance is required to tag or drive a car in Oklahoma.

There are a couple of bills in the hopper allowing the teaching of creationism in public schools.

A recent tax study committee recommended doing away with tax credits for child day care, even though the state has one of the highest teen pregnancy rates in the country.

Gov. Mary Fallin is pressing hard to eliminate the state income tax. Moody’s issued a statement saying it would not raise the state bond rating should the tax be eliminated.

State Rep. Sally Kern has declared homosexuality a greater threat to the U.S. government that terrorism. Pope Ricky fears homosexuality can lead to “man on dog” relationships. This does leave one to wonder just what happened back in his college days.

Considering Oklahoma’s propensity for dancing on the edge of political and social reality, it should be interesting to watch the remaining contenders try to out conserve each other.

After all, football season is over, March Madness has yet to begin, and baseball season is still a few weeks away. The Oklahoma primary will be the cheapest and most entertaining game in town.