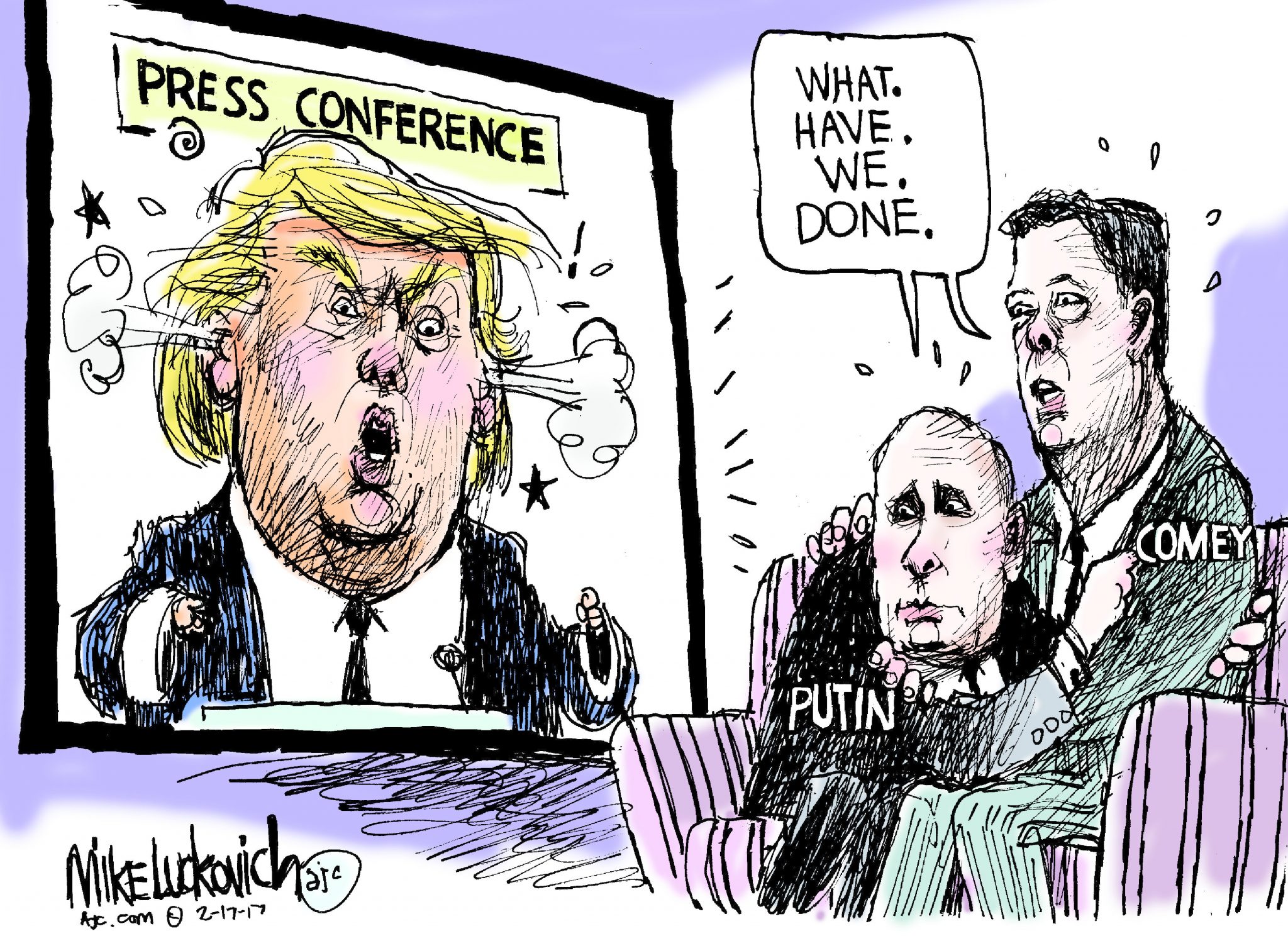 Betrayal! The Ugliness Of Trump

Upon reviewing my previous essays on betrayals within our nation’s politics and government, I saw that certain prophecies have unfortunately come true, and some things not imagined have come to pass that are even worse. There is a sense of ugliness coming from this newly ordained administration and Congress that smacks of the Lincoln era during and after the Civil War. Worse yet is the wanton slide to outright fascism and despotic rhetoric coming from Trump and his mouthpieces, aka his staff.

Kellyanne Conway is very talented. Who else could lie straight into the camera and be arrogantly un-flapped when called out for the blatancy of her infamous “alternative facts” gaffe? Amazing. Chuck Todd probably had visions of a Pulitzer Prize dancing across his eyes with that event.

Conway is, of course, the voice of Trump. She is the biological equivalent of Twitterville in the residence. If anyone can spin straw into gold, it’s Kellyanne Conway. No wonder TV pundits are giving her so much airtime. They get to be the laugh-line straight man [or woman] for the bizarre.

Sean Spicer just gets to make lies sound like the truth and badger those damned mainstream media for being so dishonest and biased against his boss. Have you noticed that he never calls on the front row reporters at his press conferences? His first questions always seem to go to Murdoch-owned outlets or Breitbart. Why is that? Oh, those uncomfortable questions that require a factually correct answer …

On Valentines Day, we woke up to learn that the White House career of the mysterious and dark Michael Flynn came crashing down due to his shenanigans with the Russians before Trump was inaugurated. It was the cover-up that did him in … a la Watergate.

Is there more coming from this scandal? I’ll bet there is. I’ll bet the blackmail-by-Russia thread finds its way all the way up to the residence. Bullying the media won’t get rid of this one. We’ll see how long it takes for some courage to emerge from our Congress to rid the country and the White House of this special kind of ugly.

The first time I saw Flynn was on the Bill Maher show [of all places], and his dark view of the world scared the sand out of my eyes then. When Trump named him to be the head of NSA, the trepidation increased. Frankly, it’s good that he’s gone. He had a tough time with the U.S. Army for tipping his hand with classified information to foreigners then also.

Meanwhile, there is hope from a more engaged populace. Since I last addressed this issue, hundreds of daily demonstrations involving millions of people across the country and the world have illuminated the room of state and sent the roaches scurrying for cover. Almost every Congress critter is discovering that he or she actually represents real people instead of just campaign donors.

“Who are these rabble crowding my office and doorstep? Oh. You’re them. Well, what do you want?”

The subsequent torrent of requests and demands is blowing these people off the stages and Town Hall daises and has them running back to the safety of their donor hotlines. The fallout from these behaviors will reflect how these representatives addressed the issues from their constituents and how well – or poorly – they engaged them. Elections are in less than two years. Let’s see if the people have the staying power to cement their outrage at the voting booth.

Take Jason Chaffetz – please. This is the guy [R-Utah] who, with twinkling eyes, couldn’t wait for the next Comey-generated e-mail from Clinton’s server so he could get more face time hunting the witch he so wanted to destroy. Now that he has a real scandal on his hands, he has suddenly become not interested. He is floating along while the Russian hacking and influence peddling at the White House keeps nipping at all our heels. He takes great umbrage with Kellyanne Conway’s gaffe about buying Ivanka’s “stuff,” and threatens a thorough investigation. Wow.

Russian influence in our elections vs. Kellyanne’s big mouth … What a choice. Time allotment must be a real challenge for this guy as chairman of the House Oversight and Government Reform Committee, because he has opened exactly zero probes into anything involved with this Russian scandal or any of the conflicts of interests among the Trump cabinet or Trump himself. Why would he be avoiding these juicy case opportunities when he spent tons of political capital [and our tax dollars] proving to the world that there was no there, there with the Clinton witch hunt.

Now, Chaffetz is saying that the people embarrassing him to tears at his one-and-only Town Hall meeting were paid imports sent in to make him look foolish. It’s his performance in Congress that is making him look foolish, partisan beyond the pale and shallow in his pursuits of the truth. But Chaffetz is a Republican, and Republicans tend to not like the shoe being on the other foot … or having to answer to their constituents about how they have betrayed those constituents for so many years.

Continuing the footwear [waiting for the shoe to drop] analogy: We wait for the first policy action by Betsy DeVos. She barely was confirmed by the Senate after two Republican senators with bipartisan minds rejected her along with all the Democrats. What will be her first attack on public schools for the sake of going to her pet project: vouchers and privatization?

Jeff Sessions, the racist without remorse, is now our new Attorney General. The little sideshow performed by Senate Majority Leader Mitch McConnell during Sessions’ confirmation hearing and debate was disgusting in its sexist tone and its partisan idiocy. Sen. Elizabeth Warren was muted while reading Coretta Scott King’s letter summarizing Sessions’ actions in Alabama that were fundamentally racist.

McConnell threw up all over himself by telling the world that it was improper for Warren to be impugning Sen. Sessions with the truth. This begs the question, of course, that if the truth impugns the candidate for AG, maybe he shouldn’t be the AG?

No such intellectual leaps from McConnell. He’s too busy betraying the decorum of the Senate and the trust of his constituents – who surrounded his office and home in Kentucky demanding he govern instead of being just another governmental jerk.

BTW, other Democratic senators – all male – proceeded to read King’s letter for the record without a peep from the miserable McConnell. Anyone not realizing that this disgrace from McConnell was purely a political ploy to try to eliminate Elizabeth Warren as a viable presidential candidate hasn’t been paying attention to the slimy highway of McConnell’s career.

Besides the bizarre and mind-warping behaviors of our new president, there are the “meetings” with foreign leaders, the uncomfortable handshakes and the humorless rantings about so-called judges, court rulings and xenophobic executive orders. This president will sign anything Steve Bannon puts in front of him including a remake of the president’s inner-most security circle, the NSC, that included himself [Bannon] instead of the chairman of the joint chiefs of staff.

Maybe it’s just me, but this act alone is one a despotic dictator would make. Add to that the ravings of Stephen Miller saying that the president’s power is absolute and unquestionable, and you have an instant replay of a government that had Joseph Goebbels as its chief propagandist to the leader.

Bannon, Miller and Trump are all betraying democracy for their fascist and despotic views of governance. Between these guys and the Republicans in Congress confirming the most incompetent, backward-thinking, racist and ideological cabinet in our history, we have a formula for calamity, if not something more dramatic. This massive betrayal of all the things that governed our nation for 234 years is not just change, or an alternate universe, it is an outright coup of liberty, freedom, free elections and human rights. Waiting for all these shoes to drop should keep us all awake at night.

Dave Gold just published a fine article on Politico discussing how Democrats need to change their methodology and message in order to win elections. He suggested, basically, that Democrats move away from data-driven campaigns and start interacting with people in a more personal and emotional way.

Harry Truman did that in 1948 with his whistle-stop tour of the nation. He used the basic rhetoric of the day, but, surprisingly, the message then was not much different than it is today.

We all still live with the values of FDR’s Second Bill of Rights speech from 1944. In that speech he set forth those things that should never be betrayed by anybody or any political party. Those things are what make us strong and secure in our democratic republic. The betrayals of today in the Trump camp and the Republican-dominated Congress and statehouses across the country all attack those six ideals and values. Their alternative view favors the rich and casts the workingman and middle classes to the side of the pot-holed road.

This the ugliness of the Trump-era betrayal of us all.