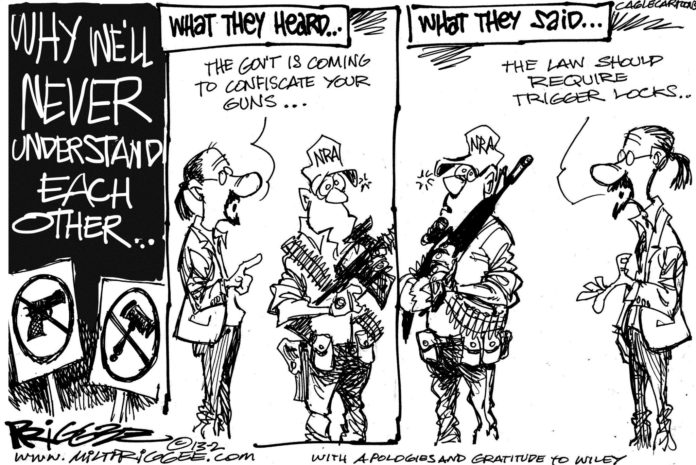 It seems someone out there in the cyber world has decided that all gun owners fall under an umbrella definition that goes something like this:

GUN OWNERS – Paranoid, fearful, insecure, anti-liberal, anti-Democrat, anti-social reform. This demographic of the population is irresponsible, thinks about ways to hurt others, when confronted starts to foam at the mouth and screams irrationally about the rights that are being taken from them. Gun owning people are a menace to society and need to be kept away from schools and other venues where large numbers of people have been known to congregate. Beware of this human – they function as verbs, adverbs and nouns and act in accordance with their confusion and obvious identity concerns.

That is admittedly sarcastic – I intended it to be that way. I am a gun owner – not one but several – perhaps more even than several. I do not feel I have an obligation to anyone to explain that fact.

Likewise, I would respectfully ask that those who have no desire, see no need or simply do not like guns, please refrain from explaining your position or motivation for something that is your personal decision – and one that you have every right to hold.

I own guns … period. I do not have to explain to you why. You do not own guns – I do not need your repeated and constant attempts to explain why.

The point is when a person begins to explain the rationale behind a personal point of view – inevitably that explaining leads to self justification which leads to claiming some sort of moral high ground which leads to feeling of superiority.

I do not consider another person’s disagreement with me a personal issue. It is not a reason to dislike or denigrate but so often when “hot button” issues come up it leads to hurt feelings and misunderstandings.

If you do not own a single gun, I like you just as you are. I own multiple firearms; my hope is that what I own is not what I am judged by.

– Don Nelson lives in Lawton, OK and is a frequent contributor to The Oklahoma Observer