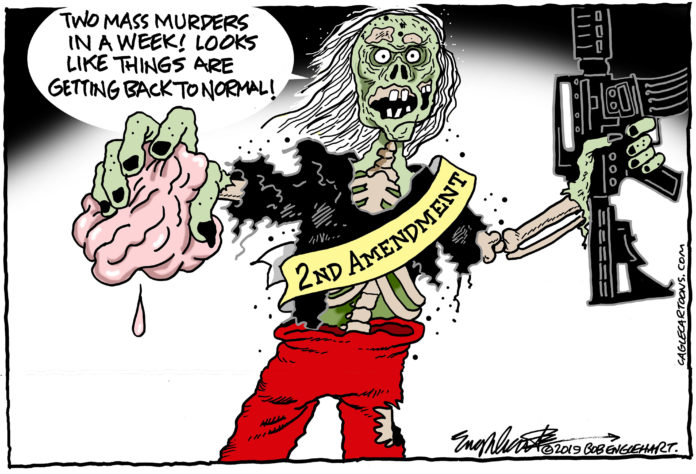 The breaking part is rather routine in America. Ten innocent folks murdered, nine of them while just out buying bacon, bread, maybe toothpaste and toilet paper as well, plus a man in blue, all victims yesterday of a person with an assault rifle in one of our most beautiful and safe communities Boulder, CO.

Identification of the nine has not yet been released while that of the heroic policeman has. He is a 10-year veteran of Boulder. His name is Eric Talley, age 51, and a dad to seven children. He like the shoppers thought Monday, March 22, 2021 would probably be routine and certainly not their last day on this earth.

However, because a person, off plumb about something, had an assault weapon of war, best used to quickly kill, main and injure other humans, and who purposely or randomly chose a public place to carry out his evil mission, 10 Americans are dead today who were alive yesterday.

They did nothing wrong. The shooter did much wrong. The rest of us continue to do not enough to reduce the number of these so called “mass murders” in the future and, by the way, over the last seven days, there have been the two really famous, heinous such incidents in Atlanta and Boulder plus five more throughout the country. [A mass murder is defined by Washington as four or more victims. I guess just three isn’t big enough to fit into the word mass.]

Take this quick test. Name any other one country where there also has been a reported mass murder over the last seven days. One. Just one. Can’t do it, can you?

This is the non-breaking news.

So now the mourning, praying, crying, consoling and counseling begins. Then the funerals. Then little to nothing else as the 50 folks who could respond with common sense won’t.

Those would be the half a hundred Republican senators in DC who could admit that assault rifles have no business in the hands of most Americans [military and law enforcement excepted]; they could admit background checks make common sense; or they could admit longer waiting periods to buy a gun makes sense [the Atlanta shooter bought his the same day he murdered eight others] … but they won’t admit any of these things not because they don’t know those things. They do.

But you see there is a morally and financially bankrupt American corporation in the process of moving from Fairfax, VA to most likely Austin, TX. Its name is the National Rifle Association and this bunch, with a few million dues paying members, owns the votes of the shitty 50.

And what do the other 330 million or so Americans own that the shitty 50 don’t?

A conscience, which is defined by Webster as the “ability to distinguish between what is right and what is wrong.”