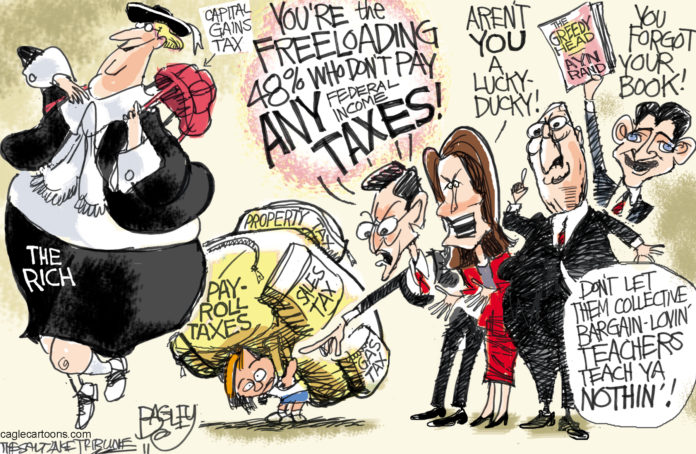 In 2004, during another debate about taxes and jobs, Gary Burtles, a labor economist with the Brookings Institution, pointed out that total taxation in Sweden was almost twice that of the United States but unemployment was much lower. It’s not the tax rate, he told Jonathan Weisman of the Washington Post, but the tax structures.

What does that mean?

It means that workers in Sweden are rewarded for working. They pay their taxes. They benefit from the taxes they pay.

“You simply can’t look at total taxation to find employment levels,” he said.

There are those in the United States who know how to game the system. The pay little or no taxes but manage to get plenty back. I’m not talking about the poor.

Poor people pay taxes. They pay sales taxes on food and other essentials. If they drive a vehicle, they pay gasoline taxes. If they own any property at all, they pay property taxes. They often pay a larger proportion of their income in taxes than wealthier people do. This is called regressive taxation. It isn’t good for the economy.

Corporations, on the other hand, can send jobs overseas, park profits off shore, give outrageous bonuses to people at the top, and still manage to qualify for government subsidies paid for by the tax dollars that you and I pay.

Billionaires, both conservative and liberal, and industries employ lobbyists and fund think tanks. They write legislation that moves the money from the American middle class and gives it to the American ruling class. Congress goes along, structuring the tax code to favor the ultra wealthy. Money rules in this country.

If you doubt that the money is migrating up, consider this statistic from the CIA World Factbook: the United States ranks 97 of 136 countries in income inequality. That’s the gap between what the poor earn and what the wealthy earn. And we’re in good company. Camaroon is 96 and Jamaica is 98.

Until our elected representatives realize that they are the voice of the people, not of the money, and until voters realize that we are the government and should be recipients of the services we pay for, out country will continue to slide toward Third World status.

We pay taxes to get services back. Everyone should pay a fair share, including the Koch brothers and General Electric [Hey, GE is a person!]. We must structure our tax system so that we can regain our economic standing and put our citizens back to work.