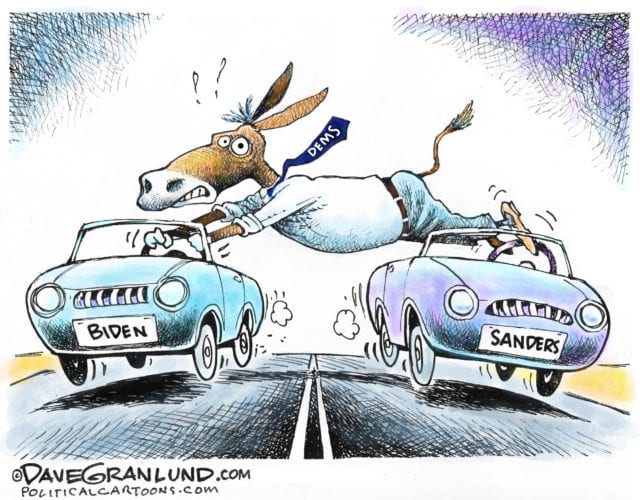 Bots and trolls, data mining, strategic drops of stolen emails, gerrymandering, voter suppression, and the Supreme Court’s gutting of the Voting Rights Act all conspired to give us this corrupt and incompetent administration. Apathy played a part. Imagine if everyone not served by the GOP’s tax cuts and austerity policies had voted!

What are we going to do to make sure this doesn’t happen again? I’m not sure our republic can withstand another four years.

First, we have to quit creating division. Whether the eventual nominee is your favorite or your least favorite, talk him or her up, not down. We are all in this together.

Democrats have to hone their economic message. The current economy isn’t good for everyone. It isn’t even good for most of us. Candidates have to be clear about what Democrats want to do to tackle income and opportunity inequality.

Don’t let the president and his supporters define us. Insuring a social safety net doesn’t make us a socialist country, no matter how many times either side uses the word. Plutocracy and rule by a moneyed elite are the real dangers.

When dark money can buy elections, the people’s voices are drowned out.

When lies are repeated often enough, they become misinformed voters’ truths. We have to counter the lies.

We all want affordable access to healthcare, but we don’t have to tear down the system and rebuild from scratch. Let’s rally for a public option.

If the ACA is struck down and our preexisting conditions are no longer covered, we will have to take to the streets and to the polling booths.

Even if the Democratic nominee wants a healthcare revolution instead of evolution, he or she can’t do it alone. It would require both the Congress and Senate to get on board with the plan. Make that clear to those who are scared of losing the policies they already have.

There’s more than one race going on. Let’s turn the Senate blue.

Until we get publicly-funded elections, support the candidates of your choice. Five dollars a month, or one dollar, adds up if enough small donors contribute. It’s a fact: money matters.

Don’t assume that all Republicans are OK with this administration’s racism, incompetence, and corruption. Invite them to join the conversation.

The stakes are too high for us to be squabbling. They are certainly too high for anyone to sit this election out.