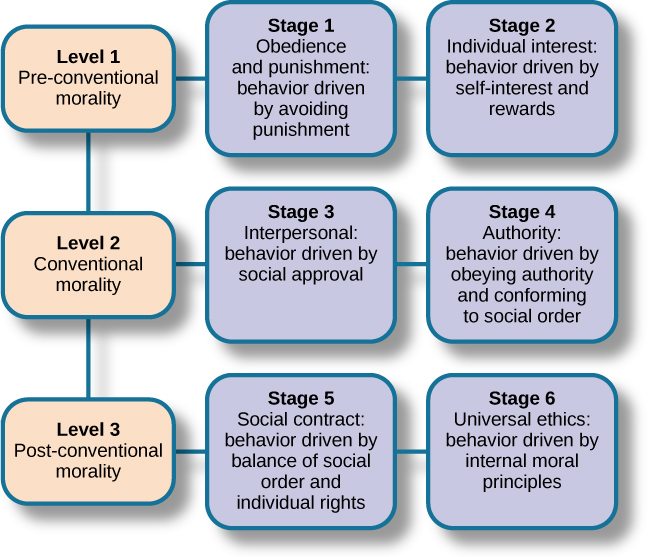 It was in Trump’s self interest for Comey to let go of the Michael Flynn investigation, and he saw nothing wrong in expressing his hope to Comey that he would do so. Trump sees nothing wrong with the conflicts of interest and rewards related to his ongoing international business enterprise because it serves his self-interest and the interest of his family – an extension of himself.

Trump gravitates to Fox News and like-minded media outlets, and in return for their social approval, he tweets his praise for them. Trump expects his subordinates to serve his interests, express loyalty to him, and obey his authority. If they do not do these things, they are fired.

The critics of Comey who are fixated on the “impropriety” of Comey sharing portions of his memos to the press seem to be arguing at a conventional level of moral development from a Stage 4 perspective that emphasizes obeying authority and confirming to social order. Some of Comey’s critics also argue from the even lower stages from which Trump himself is operating.

Under normal circumstances, obeying authority and confirming to social order would entail not sharing details about a private conversation one has with the president unless given permission to do so, but Comey recognizes that these are not normal circumstances.

Comey seems to be working from a post-conventional level of morality in both stages five and six in which he is carefully considering the importance of our social contract and balancing social order and individual rights [Stage 5] and acting according to a more universal ethics guided by internal principles [Stage 6].

Comey did what I think any serious and thoughtful moral person in the post-conventional level of moral development would do in his situation. He knew he would receive criticism for sharing portions of his memos with the press, but he looked at the fullness of the moral situation and did what he found to be the most fitting thing to do given the gravity of the president’s actions.

Comey felt that sharing portions of his memos would help lead to the appointment of a special counsel, which would be in his mind the best way to get to the truth of what has happened and what is happening and do what is right for the social good. Comey was capable of doing a complex contextual moral analysis of the situation, and he acted accordingly.

The fact that Comey did something that would open himself to criticism actually strengthens the underlying morality of his choice in my understanding. He was willing to do something that he knew would bring him criticism, but he did it anyway for the sake of the greater good. Comey knows that one must be a moral realist in times like these and make decisions that are both nuanced and difficult.

There is a reason why Comey turns explicitly to people like Reinhold Niebuhr and Martin Luther King Jr. to guide his moral thinking. There is also a reason that a person like Trump turns to people like Franklin Graham and Jerry Falwell Jr.

Whose Side Are You On?