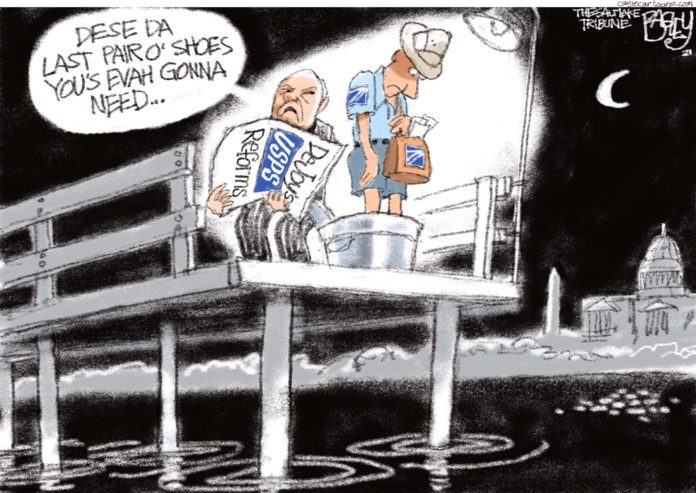 Current Postmaster General Louis DeJoy was appointed by the last president with the goal of wrecking Ben Franklin’s wonderful idea that the government is responsible for maintaining communications among USAnians. DeJoy’s joyless “plan” is to slow mail delivery, cut post office hours, raise prices. In short, do everything possible to wreck its service record.

And I can vouch for the worsening of service from the last three months of last year – when an auxiliary goal was to screw up our elections. I have had more bad postal experiences in the past six months than in the past forever.

Having worked for an educational audio-visual company that depended upon the Postal Service, I know how reliable it can be.

There are other modes of communication, of course, but the Postal Service also delivers packages.

As the Daily Kos’s Egberto Willies observes, “Corporations are salivating. In a society where online shopping is exploding, package delivery is lucrative. And Wall Street wants that. They want to control every necessary service in America to continue their extortion for profit. They’ve done it in healthcare. They’ve done it in energy. Now they want to do it in package delivery.”

Of course, why have an efficient, trustworthy branch of government and public servants in charge of mail service when it can be profitized by privateers, beholden to no one, with that noble goal of maximum profit for the least effort.

Offer a financial lifeline to people ravaged by a pandemic that was worsened by a bungling, incompetent Republican president, and Republicans scream, “Socialism!”

Oklahomans kicked an uncaring GOPQ state government aside and voted in Medicaid expansion to bring better health care to residents whose state “health outcomes” rank 46th nationally, according to The Frontier. We will be getting federal health care money.

So, Gov. Kevin Stitt finagled a plan to take management of the program away from state health employees and funnel up to $2.2 billion in health care contracts to the private sector.

As The Frontier reported, with help from StateImpact Oklahoma, “Opponents are concerned the program was designed hastily, that it will reduce health access for low-income Oklahomans instead of improving it, that it will drive down provider participation in Medicaid, that the $2.2 billion contracts faced no legislative oversight, and that Oklahoma’s past attempts to implement full managed care failed miserably.”

Thinking Oklahomans might be “concerned” about turning businesses loose with public money – and public health. Not Oklahoma Republicans.

Potentially catastrophic utility charges are hanging over many in the state because our Republican-controlled Corporation Commission greases the skids for the companies it is supposed to regulate.

The governor and other Republicans want to divert state education money to private schools, with an underlying goal of having public funds pay for religious indoctrination instead of meaningful education.

It’s not enough that religious groups can amass huge real estate holdings and other trappings of wealth without paying taxes, the public needs to support their proselytizing efforts as well. The free press does not get such a free ride.

And a current state Senate bill would take the first step to eliminate state public hunting lands. GOPQ sponsor Sen. Casey Murdock, says, “I don’t believe the government should be owning land. I believe land ownership, property ownership should be in the private citizens’ hands.”

I remember from my days in western Oklahoma more than a dozen years ago that locals were concerned that rich Oklahoma City hunters were buying up – and posting – land that they had been hunting on all their lives.

Hunting only for the rich, just like all Republican elitist policies. Maybe someday rural Oklahomans – and the rest of our neighbors as well – will realize that they aren’t rich enough to be Republicans.

Corporate socialists want governments run to maximize their profits. And what is more profitable than vacuuming up public funds with the help complicit Republican politicians?

Editor’s Note: Since this column was written, Republican Rep. Marcus McEntire of Duncan proposed a measure that would keep state control over the Medicaid system. With only seven weeks left in the session, its fate is uncertain.