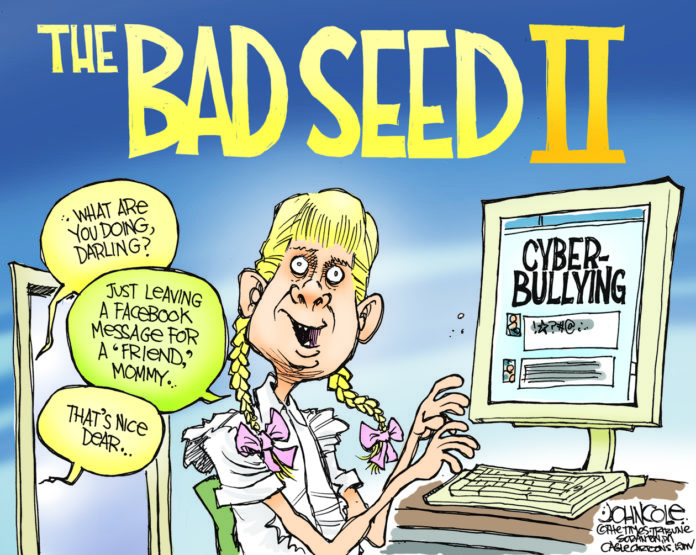 No intricate phrases, no flowery modifiers. We even have common way of restating the idea: “I can say what I want … I’m an American.” But that doesn’t mean there are no limits, restrictions or rules.

Words involved in criminal activity – say, solicitation for prostitution – are not protected speech. Defamatory statements are subject to legal action after being written or uttered, to make good the damage unfairly done. Words that carry no penalty when spoken at, say, high noon in the public square can prompt an arrest at 3 a.m. under a bedroom window. Seemingly innocuous words uttered repeatedly to an unwilling recipient reach the level of harassment.

And we cannot make “true threats” against another person. This particular exception to First Amendment protections seems simple enough. But even here we can have complex legal issues.

Case in point: A recent Arizona legislative proposal intended to combat cyberstalking and online bullying. Supporters say the proposed bill just revises existing law to include a new kind of media. But critics say it opens wide a door to potential constitutional violations by making it a crime to offend or annoy others.

No one is defending attacks on others via the Internet. Rather, critics of the measure say it fails to make important distinctions.

Groups ranging from booksellers to music companies to broadcasters have called on Arizona Gov. Jan Brewer, urging a veto of the bill. Lawmakers have since agreed to take another look at the legislation.

Among potential First Amendment issues that critics have identified:

– The proposal fails to distinguish between harassing speech delivered one-to-one, such as in an e-mail or telephone call, and harsh or offending speech on a web posting intended for the public with no specific individual intended as a target.

– The bill’s terms are vague or unexplained, leaving the possibility of prosecution for language that may be offensive but historically lacks the basis for criminal charges.

The potential to chill legitimate – if contentious – speech merits this second look by the Legislature.

Clearly the web provides ways for launching anonymous, unrelenting attacks against people – particularly young people. But the web also has provided new opportunities for people to air views outside the acceptable, mainstream order of things. Many online discussions include frank – and sometimes profane or lewd – speech, which while offensive is not in and of itself illegal.

A law that purports to parse and punish speech that gives rise to criminal conduct, but which is not intended to apply to merely crude behavior, ought to use specific language and terms that define exactly what it means.

Those 45 words that protect free speech deserve that kind of careful wording.

– Gene Policinski is senior vice president and executive director of the First Amendment Center in Nashville. His columns appear occasionally in The Oklahoma Observer.