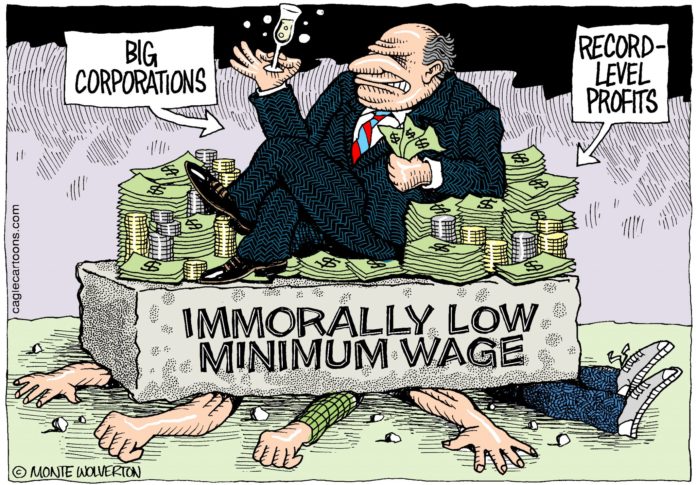 Debating In The Clear

Why won’t people be straight with one another? What sort of gotcha game are we running? Debating our national situation has become a full-time job for just about anyone with a keyboard. Ironically, few of these jobs pay a living wage. Ah, yes … the living wage.

The standard work year for a full-time job, including the usual holidays and some vacation, amounts to 1,880 hours per year. At $7.50 per hour that amounts to $14,400 per year before Medicare and Social Security deductions. This person would not pay federal income tax because the base salary is half of the minimum for declaring poverty.

The buzz now is to raise the minimum wage to $11 an hour. Great. That equates to $20,680 per year before deductions. This gets closer to survival for a single person who insists on buying Roach Motels for his/her flat.

True believing Christian conservatives [or politicians who want their vote] keep telling us how this nation was founded on Christian principles and that our Founding Fathers insisted on them. It wasn’t and they didn’t.

It is fair to note, however, that these true believers, being conservative by self-ordination, tend to vote against feeding the poor, housing the indigent, educating the ignorant and clothing the destitute.

If I recall the words from the New Testament correctly, the Lord and Savior of Christian religions advocated doing these things for those less fortunate than the “haves.”

This begs the question: Which masters are these people serving – their religion or their pocketbooks?

OK. Benefit of the doubt says: “Well, let ‘em find a job. I don’t want to pay for a handout.” Great. We now have over 20 million people looking for jobs that don’t exist. The number of minimum pay and part-time jobs that pay NO benefits has skyrocketed over the last decade.

Something like six million blue- and white-collar jobs went to Asia, Latin America and Africa since 2001. Corporate America continues to sit on several trillion dollars of capital that could be used to create new industries that would indeed provide jobs for most of those 20 million folks.

But, no … The excuse for not investing in job growth is “an uncertainty about the markets.” So much for that good old-fashioned entrepreneurial spirit …

Anyone paying even a little attention would notice that venture capital has all but dried up. My question is: For what are the venture capitalists saving it?

Venture capital made scores of billionaires even when only 50% of their ventures paid off. Everyone keeps yammering about the potential markets for alternative energy industries, but only the other industrialized nations are exploiting those markets. They see certainty in them.

So-called conservatives keep wringing their hands and gnashing their teeth about over-regulation. OK. I hate bureaucracies, too, because they are built mostly to shelter incompetent managers from prying eyes. But regulations that work and matter are something different.

In 1933 the new Roosevelt Administration, with the help of two senators [Glass and Steagall], passed a law that built a firewall between investment banking and commercial banking. It worked. There were no more Wall Street crashes with people extended beyond their means. Loans were made with prudent rules – as they should be.

We found out in 2007-08 what happens when hedge fund managers play with other peoples’ money. They lose it … for those “other” people who put their trust in commercial banks.

The Glass-Steagall Act was overturned by Phil Gramm and Newt Gingrich in 1999 and the race was on. The world lost about $35 trillion in wealth from bad loans made on commercial banking money when the big banks all merged. The so-called conservatives just can’t seem to control their greed.

Debating public education is another item for clarity. So-called conservatives want to outlaw teachers unions because they think they are weakening the quality of public education. More facts blow up this red herring.

Teachers in the United States are among the lowest paid professionals with required college degrees in the world when comparing relative costs of living. Our children in public schools are ranked about 30th in academic skills and knowledge. Thank goodness we have those 15% of really smart, capable kids, or it would be much worse.

In Finland, where students are ranked No. 1 in the world, teachers are highly unionized, are paid equivalent salaries with their equally educated peers and are respected members of the community.

Maybe that is the difference between being No. 1 and No. 30.

Why aren’t so-called conservatives looking at those numbers? It may be because they’re trying to invent another test or another multi-billion dollar program that show how badly teachers are performing.

Well, we lead the world in football stadiums. I guess that’s a good thing.