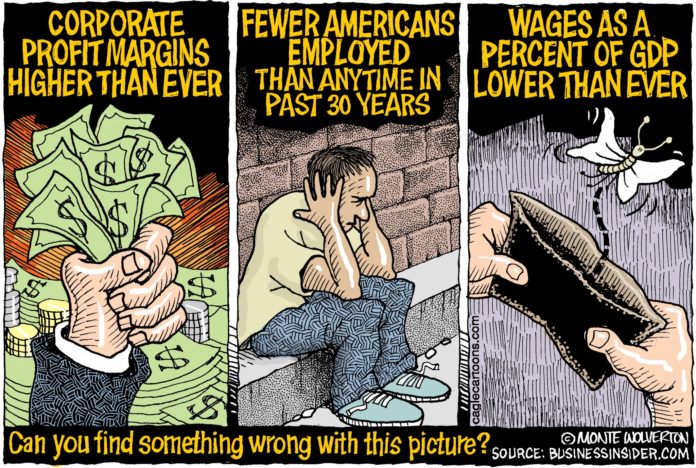 Democrats, Where Art Thou?

Calling Obama, Pelosi, Reid and the rest of the Democratic Party, elected officials, political operatives and labor’s leader Richard Trumka. Thirty million American workers want and need a federal minimum wage of $10 per hour which is slightly less than their predecessors got in 1968 – yes 1968 – adjusted for inflation.

What will it take for you to make this a priority?

Of course you all would like to see these desperate workers get an additional $2,000 – $4,500 a year for the barest necessities of life for themselves and their children. Sure, it is easy to be on the record and not on the ramparts for a higher minimum wage. What about the trust that your voters and your rank and file invested in you?

Imagine mobilizing Congress to have workers catch up with 1968 when worker productivity was about half of what it is today.

What would President Franklin Delano Roosevelt, who signed the first minimum wage law in 1938, say about today’s pathetic Democrats [with few exceptions like the more than 20 representatives who signed on to Rep. Jesse Jackson Jr.’s H.R. 5901 bill to raise the minimum wage to $10 per hour]?

Remember how FDR pushed his Democrats in the 1930s? He would not have tolerated today’s Democratic Party of caution, cash and cowardliness.

Were the Democrats from the White House, to Congress, to Richard Trumka and the major labor unions to immediately make the $10 minimum wage a national, frontline issue, which they certainly could if they want, here are the arguments they can make:

1.      Such an overdue raise is an economically and morally necessary initiative. The U.S. has the lowest national minimum wage of $7.25 per hour among major western nations, by a lot. France is over $11 and in Canada, the minimum wage ranges from $9.40 – $11, plus Canadians have a superior social safety net. Meanwhile, the U.S. has the highest paid CEOs, by far, in the world.

2.      Over the years, poll after poll shows that 70% of the people support having the minimum wage keep up with inflation. That number includes many conservatives and Republicans. Even Rick Santorum and Mitt Romney, over the years, stood for this principle, even though Romney has hemmed and hawed in recent months.

3.      Are there any economists saying that our shaky economy does not need more consumer demand? A $10 minimum wage quickly releases billions of dollars in new spending by the poor. Poor! The single word the cowering Democrats, including presidential candidates, have refused to use since Jimmy Carter. NPR’s Tavis Smiley on his poverty tour challenges Barack Obama: “Poor. Say it, Mr. President, say it. Poor!”

4.      More income for the poor means less child and family poverty which means less reliance on federal outlays for the poor to survive. The big companies, for example, take advantage of this by steering some of their employees to programs such as Medicaid. As Terrance Heath recently noted in an op-ed in the Nation of Change: “So all of us are subsidizing the wealthy owners and executives of Walmart, McDonald’s, and Target.”

5.      A new report by the respected National Employment Law Project [nelp.org] titled “Big Business, Corporate Profits, and the Minimum Wage,” said that “the majority [66%] of low-wage workers are not employed by small businesses but by large corporations.” The 50 largest of their employers are mostly “in strong financial positions.” And note this finding by NELP: “The top executive compensation averaged $9.4 million last year at these firms.” This means that the bosses, before taking a lunch on Jan. 2, made more money than a minimum wage worker makes in a year. Talk about the corrosive effects of inequality which have been fed by the top one percent taking 93% of the income growth in 2010, according to Holly Sklar of Business for a Fair Minimum Wage [businessforafairminimumwage.org].

6.      Enlightened business leaders are ready to support the Democrats on this $10 minimum wage initiative. Jeff Long, vice president of Costco, gives the obvious reasons that the retrograde corporatists ignore: “At Costco, we know good wages are good business. We keep our overhead low while still paying a starting wage of $11 an hour. Our employees are a big reason why our sales per square foot is almost double that of our nearest competitor. Instead of minimizing wages, we know it’s a lot more profitable for the long-term to minimize employee turnover and maximize employee productivity and commitment, product value, customer service and company reputation.”

7.      A $10 minimum wage will create jobs because sales will increase. Businesses, having lunched off the windfall of a falling real minimum wage since 1968, should be willing to recognize this greater good. The leading scholar refuting the net job loss propaganda is Alan Krueger who now is head of Obama’s Council of Economic Advisers. Certainly the people of Santa Fe, New Mexico are not seeing job losses there where the city minimum wage has been $9.50 per hour.

8.      The corporate oligarchy has no moral standing whatsoever. Many of the nations’ corporate giants pay no income tax or very little, far less than a cab driver. Last month, Ford Motor Co. paid no federal or state income taxes despite registering nearly $9 billion in profits. It is hard for companies making record profits and paying executives record pay to have much credibility on this subject. Further, small business has received 17 small business tax breaks under Obama.

August is the congressional recess month. Members of Congress are back home campaigning. Go to their public meetings and ask them directly whether they will vote for a $10 minimum wage when they return to Washington, D.C. after Labor Day, or call their office. One worker went up and asked this question of his representative, Cong. Bill Young, R-FL, who gave him the curled lip – “Why do you want that benefit? Get a job.” This snarl made news all over the country.

Ask “the question” Americans, again and again until Labor Day. By then, maybe Mr. Trumka and the AFL-CIO will bestir their political muscles and march with the low-wage workers and recognize what they do for all of us.

If you want more information and would like to sign the petition for a $10 minimum wage, please visit timeforaraise.org.