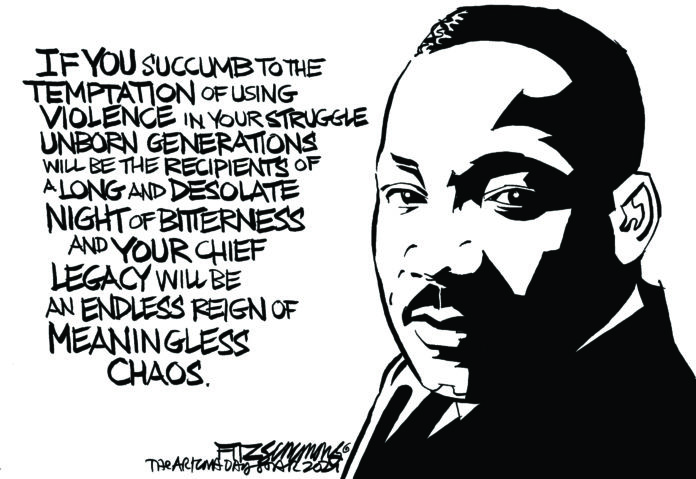 Trump’s vision and King’s vision are both part of America.

One represents our national nightmare; the other our national dream. One is the original sin of America from which we must repent; the other is the path of redemption towards Beloved Community to which justice-loving persons aspire. One leads to a violent insurrectionist “March on the Capitol” that will live forever in infamy; the other leads to MLK’s “March on Washington” that will forever inspire love and justice. One is a path backwards to the big lie of white supremacy, division, and hate; the other is the path forward to truth and reconciliation.

As I write this for Martin Luther King Day 2021, I am aware there will rightly be numerous tributes to King on MLK Day; including many quotations from King’s speeches, sermons, and writings. King’s eloquent declarations of his vision for the creation of a beloved community in this our one world house continue to remind us of what we can become if we build a society based on love and justice rather than hate and the perpetuation of gross inequities.

I am also aware that some of the persons who perpetuate America’s nightmare of injustice and continued systemic racism will use MLK Day to usurp King’s words in their attempt to “promote unity and healing” and to “put the dark day of Jan. 6 behind us” in an effort to avoid accountability for their actions.

To them I say: If your words and actions incited insurrection day, don’t be quoting MLK on MLK Day.

If you supported throwing out the votes of millions of people of color to overturn a free and fair election, don’t be quoting MLK on MLK Day.

If you call BLM a socialist or communist organization, perhaps you may know that the Trumps of MLK’s time also called him a communist and much worse, and you should keep your MLK quotes to yourself on MLK day.

If you think being anti-racist is simply about having some persons of color who are friends or about sharing videos or social media posts of persons of color because they agree with your political point of you, don’t be quoting MLK on MLK day.

As we celebrate the life and work of our national hero of civil rights and social justice, may we all be reminded of his vision that being anti-racist is about actively and relentlessly working to transform the systems that perpetuate social, economic, educational, and justice inequities within our communities and society as a whole.

Quotes and tributes can inspire us in this work, but we must repent from the national nightmare of systemic racism before we make our way towards the dream of justice and reconciliation in Beloved Community.