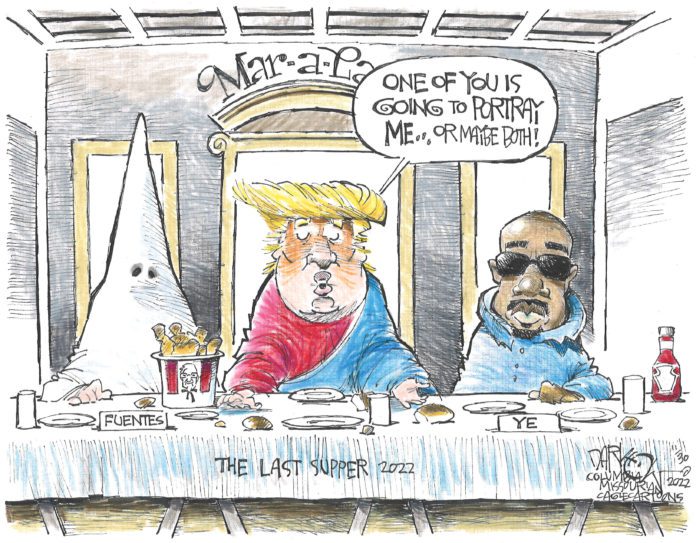 Embracing Those Who Despise You

There are clueless folks in the world.

Ye’s surrealistic, unfiltered mind makes it hard to paraphrase – or even quote. But remarks about a “Jewish underground mafia” and going “death con3” on Jews” leaves no doubt about his bigotry and ignorance.

His blatant anti-Semitism outraged all but the klanazis in our midst, and the backlash from former business partners saw his projected wealth drop from $1.5 billion to $400 million within the month.

Sometime flat-Earth advocate Kyrie Irving of the NBA’s Brooklyn Nets got his publicity fix the same month by posting a link to an anti-Semitic documentary that earned him a suspension from his employers but support from Ye. A Black man himself, Irving hinted at sharing Ye’s stupidity that the “real Jews” are Africans.

A recent CNN headline reminds us whom they are supporting: “Two men charged, one with Nazi arm-band, in connection with threats to attack New York synagogue.”

It is as if, within their egotistical bubbles, they do not realize that those they comfort with their anti-Semitism are also thoroughgoing haters of African Americans. They consider Black people subhumans, suitable only for the slavery they once knew under the confederate flag these bigots still wave so proudly.

Ye and Irving might believe that their financial success makes them immune from klanazi  anti-Black bigotry, but history has shown otherwise. After they were robbed by the Nazis, rich Jews were sent to the death camps in cattle cars along with the non-wealthy.

Today’s American white-supremacist fascists would enact just such genocide if given the chance. That is their credo. That is what they say. Believe them.

This, of course, reminds us of the stupidest man to hold our presidency.

After the murderous klanazi attacks on peaceful protesters in Charlottesville, VA, in 2017, Donald Trump assured his base base that there were “fine people” on both sides of the protests. He, too, is under the delusion that his grandchildren, son-in-law and favorite daughter, a Jewish convert, would somehow be exempt from transportation by the racists he seeks to normalize if they ever gained full control of the government.

The mob he unleashed on the Capitol in Trump’s coup attempt carried the stars-and-bars into those chambers – as Union forces forbade those other traitors from doing during the Civil War.

More recently, Trump hosted the anti-Semitic Ye in Florida. Ye brought with him Nick Fuentes, who has said, “The Jews had better start being nice to people like us, because what comes out of this is going to be a lot uglier and a lot worse for them.”

There is no doubt that Trump is a white supremacist. There is much doubt as to whether his limited mental capacities understand the full implications of that position. His continued attacks on the Jews who do not support him – who openly supports and encourages American nazionalists – shows a detachment from reality of staggering proportions.

He complains that a majority of Jews do not support. I wonder how even one could.

For Trump to support modern klanazis is as foolish as it is for Ye and Irving to push agendas that consider them subhumans. They take clueless egoism to new depths.

Previous article
The Workin’ Man’s Friend
Next article
What About Kamala?