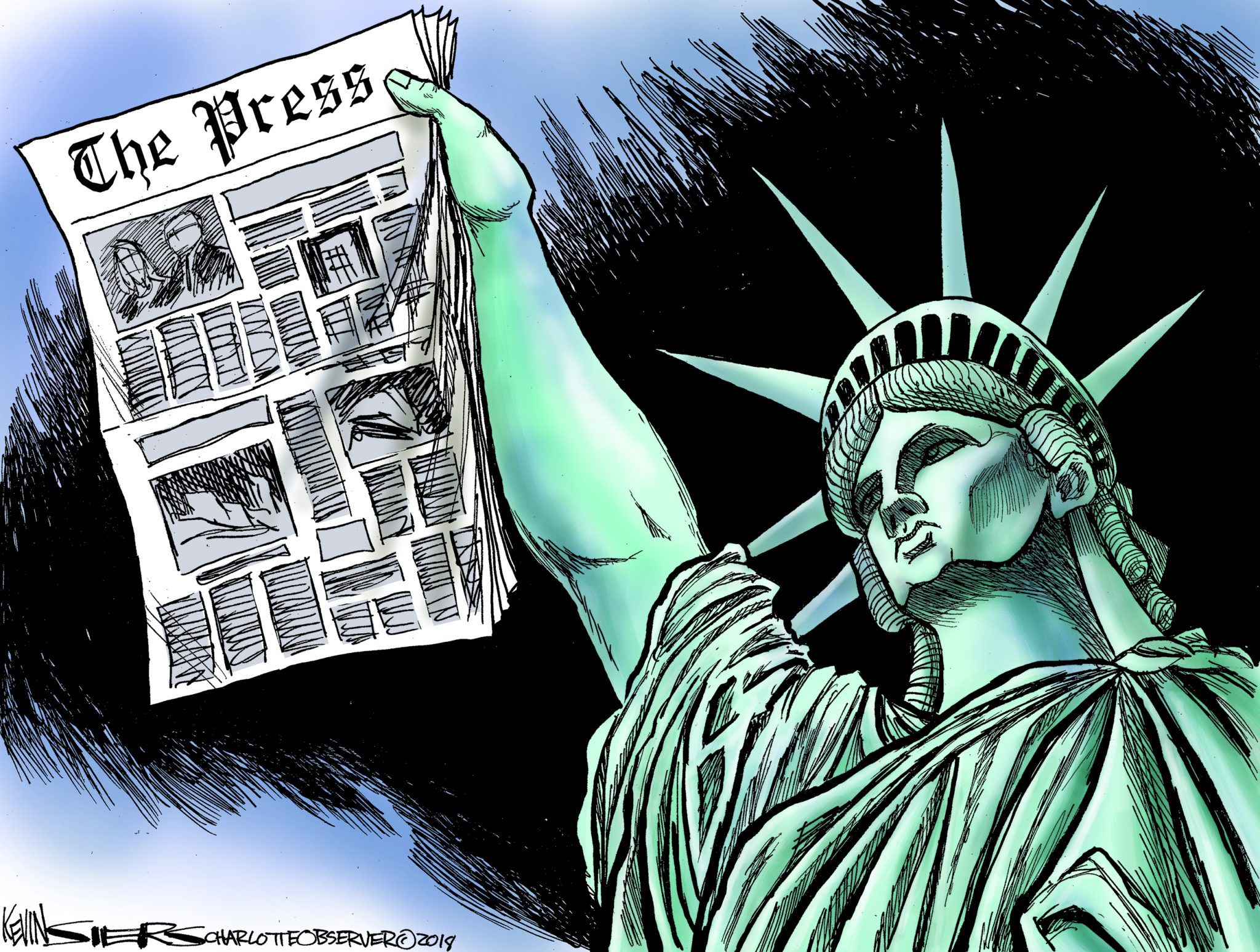 As plainly and clearly as one can say or write this:

Journalism and journalists are not “enemies of the people.”

A free press brings us the news of the day, from weather to Wall Street, and when done properly functions as a “watchdog on government.” The public expects that first part, and the First Amendment – on behalf of all of us – protects that last part.

Today, at many small town publications and major metropolitan dailies and broadcast outlets big and small, something extraordinary is happening: News outlets are publishing editorials defending a free and independent press, pushing back against those who have attacked them as “enemies,” “despicable people” and purveyors of “fake news.”

“Enemies of the people?” Don’t make me laugh – though, if the implications were not so serious, we probably should.

The reality: Most journalists put their personal preferences aside in doing their job, looking for a good story regardless of political implications. “Fake news?” The term has been diluted to a current definition of news and information that some don’t want to see or hear, rather than an earlier association with factual error or deliberate misinformation.

The slander that may sting the most – the “enemies” tag – is centuries old, even appearing in a Shakespearean tragedy, but is most often associated with despots of a modern time, Stalin and Hitler. The charge simply has no place in a debate over the role, performance or ethics of a free press. It also ignores what is plain for all to see: journalists are “the people.”

Reporters and editors and broadcasters and online journalists throughout the nation live in the very same communities on which they report. Their children attend the same schools as everyone else’s. They shop in the same stores, and worship in the same places.

Most journalists work on topics like local school board policies, track government programs and officials, and report on the joys and tragedies of everyday life. Even the select group of professionals who track events in Washington or Wall Street or Silicon Valley go home at night to families and friends, just as we all do.

Yes, there are errors made in what is now journalism’s “24/7” world. There are cable TV pundits paid to pontificate, not report. The web and social media have brought us “stuff and fluff” that pretends often to be journalism but in reality is just political messaging and social posturing from those on the right and left wings of partisan debate.

A real worry is that there are just fewer journalists and fewer news outlets around to do the job – in newspapers alone, there are less than 25,000 when in 1990 there were more than 65,000. The amount of news to be reported has not shrunk accordingly. But that does not mean the remaining staffers are any less committed to clear and accurate journalism.

“We are not the enemy of the people,” Marjorie Pritchard, deputy managing editor for the editorial page of The Boston Globe, told the Associated Press earlier this week. As of Tuesday, more than 350 newspapers and broadcast outlets said they would join in the one-day commentary combine suggested by the Globe.

Pritchard said she expects differing views from the editorials, all written locally, “but the same sentiment: the importance of a free and independent press.”

No doubt some will slam President Trump for his frequent attacks on “the media,” as if there were one, monolithic news machine rather than the diverse, independent news sources that collectively make up the nation’s news outlets.

But vitriolic attacks on the press began long before Trump found ways to exploit those terms in what he told CBS’s Leslie Stahl in 2016, as his presidential campaign began, was a deliberate tactic to “discredit you all and demean you all so when you write negative stories about me no one will believe you.”

Congress tried jailing journalists it didn’t like only a few years after the Bill of Rights was adopted in 1791 – and failed soon after. Not that many years ago, President Nixon had a news media “enemies list” of those to be targeted by government agencies and deployed Vice President Spiro Agnew to call journalists “nattering nabobs of negativity,” among other things. We know who, by virtue of relentless, solid reporting, was proven right in that dispute.

Today’s unprecedented editorial blitz is prompted in large degree by the perceived effectiveness of Trump and other politicians having found a new, direct way to deliver the “enemies” tag on a near-constant basis via social media – combined with the self-awareness of a news industry that knows it has been severely weakened by the web’s negative impact on both audience and advertising income.

There is some risk in today’s editorial effort: Trump may just use it as populist evidence that “the media” really is against him. Of course, he makes that case in many ways on most other days. And the 2018 State of the First Amendment survey, released in late June, clearly shows most Americans could use a reminder about the value of a free press.

For those willing to look, journalists print, broadcast and post stories each day that make our lives better, expose waste, fraud and abuse, and celebrate the good in our collective lives. For those not willing to look, and all too willing to just parrot the glib lines of leaders more interested in political traction than accurate criticism – well, no editorial is likely to change those minds.

Whatever the reason behind editorial writers nationwide making their case today in defense of good journalism, the ultimate – and effective – response in defense of a free press is in the work that simply proves the critics wrong.

– Gene Policinski is president and chief operating officer of the Freedom Forum Institute. He can be reached at gpolicinski@freedomforum.org, or follow him on Twitter at @genefac.