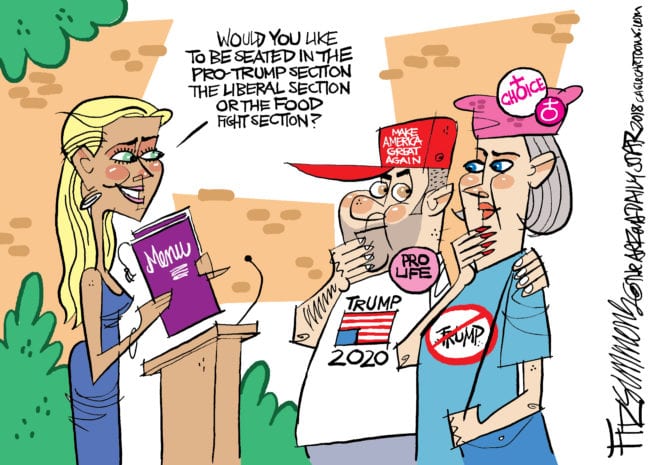 To Republicans who think all Democrats are going to hell: I’m through arguing with you. I like a good debate, and I’m willing to have my mind changed by real facts. But you don’t debate. If I don’t agree with you, I’m wrong. There is no changing your mind with logic or facts. If you don’t like the facts, you echo the president and cry, “Fake news!”

You presume you know what I’m thinking, to know what every Democrat is thinking. We aren’t all alike. We aren’t all in lockstep. That’s the beauty of the party. We can disagree on the details while keeping in mind the big picture, that politicians serve the people, not the other way around.

Not all Democrats have good motives. We need to root out the greedy and the selfish. But, all other things being equal, I believe the people are better off when Democrats are in the majority.

However, a single party always in power would give a handful of people too much power. We need at least two vibrant parties, two groups of public servants that can come together, debate the issues, and compromise, if necessary.

You’ve been taught to fear Democrats. Why? I suspect the people that want you to be afraid of Democrats are either making money off your fear or are holding on to their power.

If you think I’m stupid or delusional because I disagree with you, if I am always wrong and you are always right, say your piece. But I’m not going to argue.

There can be more than one right way. What’s right for one person may not be right for another. Consider the gray areas.

We all have a right to speak. If you speak, do your research first. Don’t just take Hannity’s word for it. Or Limbaugh’s. Or Maddow’s. Do your own research. Know the difference between journalism and junk.

Think for yourself. We are free to do this in the United States. I don’t want that right to be taken away because you let someone do your thinking for you.