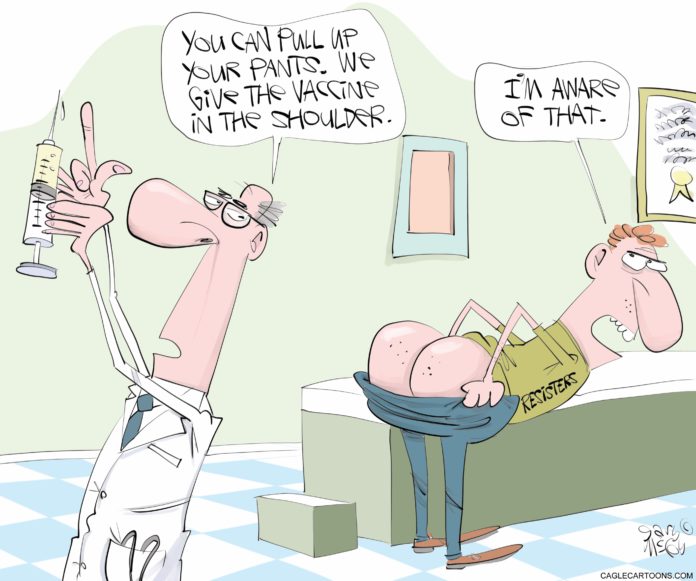 Faith-Based Medicine In Support Of Mammom

In 1764, in an act of rebellion that earned them the hatred of their pious neighbors – and a fine from the theocratic government [the goal still of many public Christians] – Green Mountaineer Ethan Allen and Dr. Thomas Young defied all that was right and good by having the latter publicly inoculate the former against smallpox. On a Sunday. Right outside the Salisbury, CT, Congregational Meeting House. For all to see. Disobedience. Defiance. Heresy.

But according to Randall, “Puritans deemed it a great sin to interfere with God’s will by trying to prevent death.” Which didn’t keep John Adams from having our other great patriot doctor, Joseph Warren, inoculate him. Shortly thereafter, Sam Adams had his children in Dr. Warren’s office.

And while different religions fought each other bitterly in colonial times – especially those fleeing persecution at home – this anti-vaxxing was one item of agreement, as evidenced by the reaction in Congregational Connecticut. Further, Randall points out, 23-year-old Thomas Jefferson traveled from Virginia to Philadelphia to get inoculated shortly after a sister’s smallpox death in 1765.

Randall claims, “Defying the taboo against inoculation was the first overt act of rebellion for these future founding fathers … their iconoclastic act sparing them for later, more public revolutionary acts.”

Yep, anti-science, anti-education, anti-vaccine forces were alive and well even before our country was founded. You would think …

But what Randall deems “obdurate superstition” is still going strong – with added an imprimatur.

Recently, The Lost Ogle (a whole lot of fun) repeated a Facebook post from Rev. Diana K. Davies of the First Unitarian Church of Oklahoma City after a Zoom meeting on Nov. 23 with Gov. COVID Kevin Stitt.

According to Rev. Davies, our anti-vaxxing governor called for “a day of prayer and fasting on Dec. 3 and asked us to ask our parishioners to ‘take this seriously.’ The end. Many of us were posting in the chat, pleading for him to at least consider a statewide mask mandate as the best way to care for the most vulnerable among us and to control the explosion of COVID cases in this state. These comments were completely disregarded.”

Ignoring the multi-denominational makeup of meeting attendees – just as he had at his Pray It Away rally in March [where people obviously didn’t pray hard enough] – Stitt let all know that “Oklahoma is behind Jesus” … some might say, “way behind” – and then “randomly” called on anti-masker megachurch leaders representing evangelicals and Pentecostals who praised Stitt’s inaction on the pandemic.

Take it “seriously,” but not seriously enough to do anything about it. Nothing positive anyway.

Because, also last week, Peyton Yager of KFOR reported: “The Oklahoma State Department of Health revealed on Tuesday that asymptomatic COVID-19 positive medical workers are cleared to continue working under CDC guidelines if a hospital is in dire need of staff. This announcement comes as Oklahoma hospitals continue to remain short-staffed.”

Typhoid Mary and super-spreader Trump would probably approve of the decision, but not so Dr. Scott Michener, Chief Medical Officer at Comanche County Memorial Hospital. He told Yager, “To me, that seems like the most insane thing. You won’t mandate a mask, but you’re allowing COVID-19 positive health workers to work.”

That Jesus fella that Gov. Stitt mentioned once asserted that “Ye cannot serve God and Mammon.”

But what Jesus wasn’t counting on was the modern American deification of money. Mammon is now our God. Nothing takes precedence over the sacred bottom line.

Donald Trump cost us 100,000 or so lives due to his Wall Street over Wellness, lying-and-denying approach to the pandemic. Gov. Stitt followed this playbook in Oklahoma, as have many of our local governments.

And Trump, Moscow Mitch and their cowering GOP cohorts have exacerbated the problem by stonewalling efforts at proper financial relief for small businesses, furloughed and fired workers and those put out of work by business closings.

But, take heart, U.S. billionaires have raked in another trillion dollars during the pandemic. Money is God; the richest, the most godly, the most deserving in Republican circles.

I’ll stand with our founding heretics on this one.