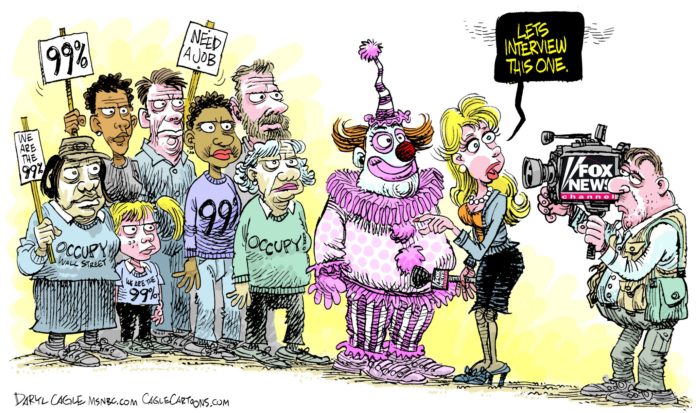 Tucker Carlson: Why are liberals outraged that people think he is a Muslim? Is it suddenly bad to be a Muslim now in the eyes of being a liberal?

I don’t know Tucker. Maybe it is because Fox spends all of its time trying to convince everyone that Muslims are terrorists and therefore the president must be a terrorist because he went to school in Indonesia when he was six, not by his own choosing, but because he was honoring the wishes of his parents. Or it could have something to do with so many Christians judging the president’s salvation.

John Stossel: Jane Fonda and Barbra Streisand, all by themselves, could buy birth control for every poor woman in America.

If that is so, Exxon should be buying me gas, they can afford it.

Hannity: Game Change, I watched it. All this was was an attempt to smear Gov. Palin, conservatives …

It was attempt by two people who are very sorry they introduced the rest of us to the incredibly uninformed, ill-prepared, ill-tempered Palin and they needed to apologize.

Monica Crowley: This is liberals trying to spend time manipulating us and we are over it.

I need more of a clip to really understand this one.

Noelle Nikpour: If they had replaced that with Good Muslim Bitches. First of all it would never have gotten to be a pilot and no one would have acted in it. They would have been sued.

After over 40 years in a number of Christian churches, I could give them enough material for a 24-hour, non-stop marathon. How about a deacon’s wife telling a kid, to his face, he should be wearing better clothes to church? This particular kid was 15 and had just come out of a detention facility, his entire family had moved and did not tell him where they lived and he was wearing the only thing he had. I told the GCB off and bought him several outfits.

Tucker Carlson: This is just catering to the dumb biases of Volvo Driving NPR besotted Lefties.