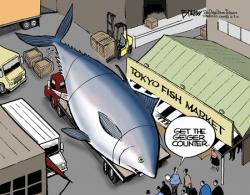 Fukushima: How Many Chernobyls Is It?

The world’s second big nuclear disaster occurred at Chernobyl Reactor No. 4 in the Ukraine on April 26, 1986. Simply tagged as “Chernobyl,” it is what the next big and well known nuke disaster, after the American Three Mile Island, on March 28, 1979 came to be called. “Chernobyl” ejected 30% of one 192-ton, three-month old reactor core. That’s 57.6 radioactive tons thrown into the air by fire and explosions.

The tiny radioactive and burning smoke particles have traveled around the world many times since 1979, killing an estimated one million people to date from radiation caused illnesses and cancers. This is according to Editor Dr. Janette Sherman’s exhaustive and widely acclaimed book on 5,000 Chernobyl scientific papers recently published by the New York Academy of Sciences [1].

Simple division tells us there are at least 48.6 Chernobyls in the burning old reactor cores pumping fiery isotopes into the Earth’s atmosphere. It is no stretch to say Fukushima Daiichi’s six reactors and the dry holding pools for old reactor cores are equal to more than 50 Chernobyl disasters.

Further clarification is needed, of course, and it is being worked out now by independent physicists. Note that the lethality of radioactive reactor cores goes up the first 250,000 years they are out of the reactor – not down.

Looking at the current Japanese meltdown as more than 50 Chernobyls is just the start. In addition, the fate of the four nearby reactors at Fukushima Daini is as yet unknown by the outside world. Working at the nearby reactors, only 10 km [6 miles away] is a quick, painful death sentence. They are inside the mandatory evacuation zone.

This much is known. All radioactive exposures are cumulative for each human, animal and plant. What’s more, mutated genetic codes are passed on to offspring forever. This means all Japanese and all Northern Hemisphere inhabitants are suffering internal radioactive contamination from Fukushima Daiichi reactors already.

Three thousand billion [3,000,000,000,000] Lethal Doses of Radiation means there are 429 Lethal Doses chasing each and every one of us on the planet, to put it in a nutshell. This is up from about 70 billion Lethal Doses March 23, 2011. It is getting worse everyday without any intervention by the U.S. and the other nuclear powers.

VeteransToday calls on the world’s nuclear powers to intervene sooner rather than later. It is up to the world’s only remaining superpower, the United States, to get the Japan reactor disaster intervention meeting officially underway.

The Fukushima Kill, already underway world wide, will certainly dwarf that of Chernobyl. All U.S. Superpower President Obama’s delay does is increase the numbers of The Kill. That is a clear Choice. We call on President Obama to re-visit that Choice.

Further, the genetic and DNA changing aspects of the radioactivity now in the air, spreading worldwide within a year, will spawn a grotesque new assortment of radiation-degraded mutants – both human and of other life forms.

Many of these creatures in the animal world will not survive long outside the womb, if carried to term. What’s more, future human genetic mutants of ever-lower intelligence and greater, more grotesque physical deformities are the genetic legacy of humanity forevermore. That is the new starting point for any rational and reality-based national or foreign policy.

What We Know Now About Fukushima

Here is what is known more than 75 days after six reactors at the Fukushima Daiichi Nuclear Reactor Plant started a disastrous and lethal nuclear meltdown on March 11, 2011.

– March 11, 14:46, a one million kiloton earthquake measuring 9.0 on the Richter Scale hammered Japan off-shore near the six Japanese reactors. The reactors attempted to shut down automatically when electronic sensors detected the earthquake. The huge earthquake dropped the reactors three feet, moved Japan eight inches to the West and altered the tilt of the Axis of planet Earth.

– March 11, about 15:30, the giant earthquake caused a tsunami up to 30 meters [98.4 feet] high, washed away all the fuel tanks for the reactors Emergency Generators and all the reactors’ outside electrical feeds. This was the death blow to the reactors.

The six Fukushima Daiichi reactors were dead in the water and their fate sealed. Without an external source of electricity for the water pumps and hot reactors, they are just so much radioactive scrap iron – good for nothing. The internal temperature of the reactors started climbing immediately.

– March 11, about 18:00, only two and a half hours later, multiple reactor cores started melting down as the reactors internal temperatures skyrocketed to the melting point of uranium and beyond – a measured 1,718 Deg C [3,124.4 Deg F] past the melting point.

Uranium melts at 1,132.2 Deg C [2,069.9 Deg F.] The internal reactor temperatures reached at least 2,850 Deg C [5,162 Deg F.] The millions of 1 mm uranium fuel pellets in the reactors and in the core pools had no defense at all without the powerful water pumps and billions of gallons of cooling water against those temperatures.

The uranium pellets simply melted forming a white hot lava-like radioactive uranium isotope blob that was and probably still is super heated by the power of the uranium atom itself. The highly radioactive blob then burned through the high temperature steel around the graphite seals of the General Electric Mark 1 Reactor Control Rods at the bottom of the American submarine based reactor design of U.S. Navy Admiral Hyman Rickover, now deceased.

The Solution, Then And Now, Has Changed

Kaku said the Japanese PM should order the Japanese Air Self Defense Force to bomb the reactors into submission with boron, sand, water and concrete like the Red Army did to kill the out-of-control Chernobyl reactor on orders of USSR President Gorbachev. Boron absorbs neutrons, the radioactive heart of the reactors.

The time for Dr. Kaku’s “Chernobyl Option” has passed. Multiple explosions destroyed the reactors and the swimming pools holding old reactor cores weeks ago. Hundreds to thousands of tons of burning highly radioactive reactor cores are scattered all over the Fukushima Daiichi site. The reactors are releasing as much as a Tepco [Tokyo Electric Power Company] measured 10 Quadtrillion [10,000 Trillion Bq] radioactive counts per hour of deadly radioactive smoke particles into the Earth’s atmosphere.

The invisible, killing radioactive smoke is already all over the Northern Hemisphere and everyone in it – each and every one – is radiologically contaminated. The scope of Dr. Kaku’s once brilliant former solution is unfortunately, now too small and ineffective.

Generally speaking, most Radiation cannot escape into the atmosphere if it is covered by water. Honshu, Japan is an island and the Pacific Ocean is conveniently located nearby.

Subsidence charges from multiple nuclear weapons buried by drilling rigs 500 ft [152.4 meters] below and inland of the string of six reactors must be engineered to slide the reactors into the sea. This method works best if there is igneous or volcanic rock behind the subsidence charges, to “bounce” the blast and pressure wave from and “push” the trashed reactors area of the beachfront into the sea.

Specially equipped submarines can then pick up the pieces of reactor cores from under water. The surface of the ocean blocks the escape of radiation. The submarines must work fast to limit killing more of the Earth’s oceans.

Veterans Today calls on President Obama to authorize the disposal of the six reactors at sea and the collection of the deadly radioactive metals with submarines. We conclude there are no other options left.

The ‘Do Nothing Option’

The “Do Nothing Option” allows the deaths and maiming of many millions of people to rapidly proceed. Doing nothing, by default, allows the Fukushima Kill to ruthlessly continue unabated. Doing nothing is also not acceptable from a practical standpoint because Japan does not own the nuclear weapons to use themselves.

Nuke the reactors at Fukushima Daiichi right into the sea, Mr. President.

– Bob Nichols is a Project Censored Award winning writer and a San Francisco Bay View correspondent whose work regularly appears in The Oklahoma Observer [and on-line at okobserver.org] and Veterans Today. A former bomb maker in a U.S. government factory in rural Oklahoma, he reports on the two nuclear weapons labs in the Bay Area. Write Mr. Nichols at duweapons@gmail.com.

It is 103 days from the start date to the end date, end date included

Or 3 months, 11 days including the end date

Chernobyl: Consequences of the Catastrophe for People and Nature, written by A. V. Yablokov, V. B. Nesterenko and A. V. Nesterenko, published by the New York Academy of Sciences in December 2009, translated and edited into a book by Dr. Janette Sherman. Dr. Sherman’s Website.http://janettesherman.com/about/

“This is a collection of papers translated from the Russian with some revised and updated contributions. Written by leading authorities from Eastern Europe, the volume outlines the history of the health and environmental consequences of the Chernobyl disaster. Although there has been discussion of the impact of nuclear accidents and Chernobyl in particular, never before has there been a comprehensive presentation of all the available information concerning the health and environmental effects of the low dose radioactive contaminants, especially those emitted from the Chernobyl nuclear power plant. Official discussions from the International Atomic Energy Agency and associated United Nations’ agencies [e.g. the Chernobyl Forum reports] have largely downplayed or ignored many of the findings reported in the Eastern European scientific literature and consequently have erred by not including these assessments.”

Picture of The Fukushima No. 1 nuclear power plant seen from about 38 kilometers west of the facility and at an altitude of 7,300 meters [Eiji Hori]