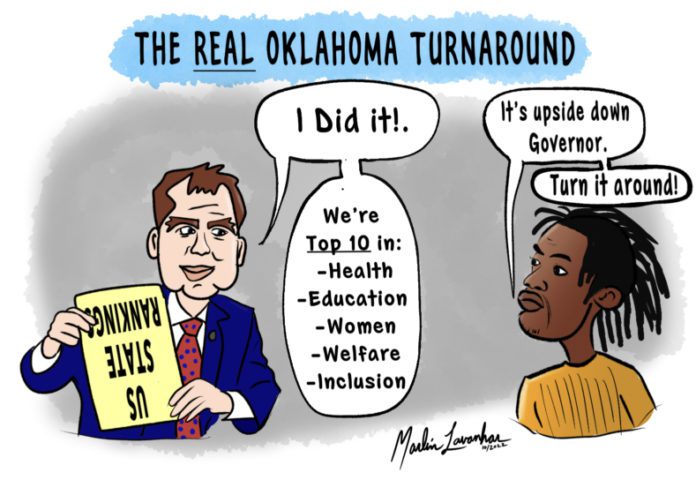 Oklahoma Gov. Kevin Stitt embraced his failures during his inauguration speech last week. The unnecessary deaths and low education rankings his first four years brought us are the plums he pulled from his pie to proclaim himself such a good governor.

Stitt disingenuously promised, “We will continue our march to the top,” conveniently overlooking the fact that the state has not taken the first step to raising its rankings among other members of the union. Maybe marching in place is good exercise, ala a treadmill.

“When we gathered on these steps four years ago, none of us could have imagined a pandemic that would test the core of who we are as Americans, as Oklahomans, and as neighbors.

“We had to ask ourselves: Would we look only to the government to save us? Would we simply batten down the hatches and wait out another bust?

“Because when other states shut down; Oklahoma chose freedom and personal responsibility. We led with both courage and compassion; and we did not surrender our citizens to groupthink.”

Compassion? Not so much.

As of inauguration day, Oklahoma earned Stitt one of his Top 10 goals when it ranked third in the number COVID-19 deaths per capita, with 441 deaths per 100,000 people, only a fraction below Mississippi for second place, according to Statista.

Other reports note that 30% of the pandemic deaths could have been avoided with the proper masking, vaccinations and social distancing advocated by health experts – and not political hacks preying mainly on their own supporters. That translates to 5,233 lives lost to indifference and ignorance in Oklahoma.

[I guess Republicans feel they have such a large state majority that a few of their voters are expendable.]

Give the governor credit for his courage. Not everyone would be proud of their part in mass killings. We should be leery when he claims, “And we will continue our march to the top!” To the top or to the cemeteries?

Our governor is also proud of his continued attack on public education: “It’s time to re-think education in Oklahoma.”

For him that means stealing public education funding and diverting it to private schools. That attempted theft was stopped by the last Legislature, but he plans to again push for a voucher system, though the details of this new plot have not been revealed, according to Kayla Branch of The Frontier, who adds, “Such a program could cost the state more than $167 million a year if just 5% of economically disadvantaged students participated, according to the State Department of Education’s estimate.”

Branch points out that these vouchers are also seen as another Oklahoma tax break for the wealthy: “Opponents of voucher programs have claimed the plan would mostly benefit families who could already afford private school.”

In his first inaugural address, Stitt proclaimed, “I am fully convinced Oklahoma can have a Top 10 education system. I also see the nation pointing to Oklahoma and saying, this is what is possible!”

Is that truly possible when the state teacher shortage under four years of Stitt’s anti-education policies has reached the point where anyone with high school diploma is now deemed qualified to teach in our schools?

Yeah, baby. Those other states are looking here for educational inspiration!

In an inaugural address that is just another campaign speech, we can expect some inconsistencies in the governor’s remarks.

For instance, when he promised, “a culture that respects and protects each person’s Constitutional right to fairness, family, and freedom of faith,” we are reminded that immediately following his election, on the steps of the State Capitol he brayed:

And, when he said, “It’s time to teach kids how to think, not what to think,” we have the bad taste to remember his handpicked Superintendent of Public Instruction calling for indoctrinating teachers and students alike in Christian nationalism [which is neither] and other Republicans working to restrict school curricula to serve their snowflake biases.

Oklahomans will be getting what they wanted. Full speed to the rear.