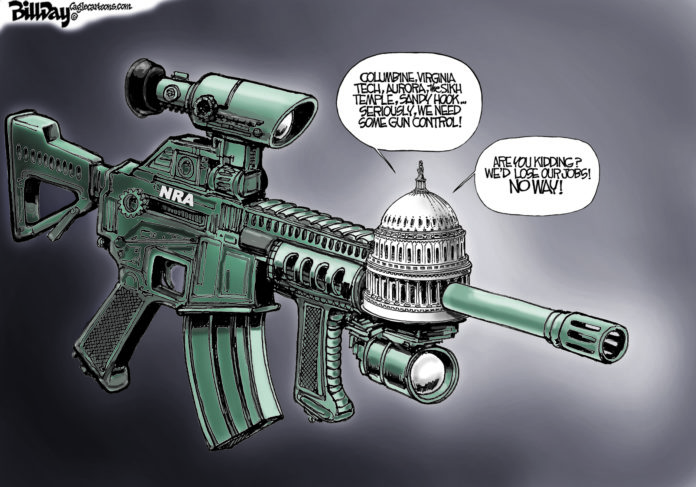 We have preachers’ wives with so little faith in God that they need a gun for protection.

Preachers used to give you a new Bible or a trip to camp if you brought more visitors to the revival and now some give you a gun.

Senators and missionaries say a gun is a birthright, but health care isn’t. I am guessing these guys use the legislator’s health care plan even though their church, The New Creation Church, believes in faith healing.

Preachers are saying that you can’t really be saved unless you have a gun.

Former church camp managers are now saying the rich deserve protection and the poor and elderly do not.

I can’t buy Sudafed, but I can buy a gun even if I have just left a mental institution.

I don’t, but people can’t smoke pot, but you can buy as much ammo as you want with no questions asked.

Teachers won’t be guiding children to safe places, they will first be having a shoot-out with a mental patient with a 100-round clip.

Pharmacists are praised and defended as heroes for emptying guns into unconscious teenagers.

They are closing mental treatment centers, but legislators want tax-free holidays for guns.

You can’t get married if you are gay, but they have to assume that anyone they see with gun is a law-abiding member of the NRA.

Who will protect me from the guys with the guns because no one can tell me how you know which ones are the good guys and which aren’t the good guys?

I understand hunters having guns and I even understand some people think you need a gun in your home, but now the senator/missionary believes everyone over 21 should have a gun in their car.

It is not possible to have too many guns.

I am not afraid of the military or police, but I am afraid of people who think guns are the only answer. I do not under any condition want anyone claiming to have Christ as the center of their life to suggest I need a gun for protection.

I don’t want any of them claiming that the rich deserve more and every one else needs to pray more.

If you believe in prayer, now is the time, because these people do not intend to let Obama have his second term.