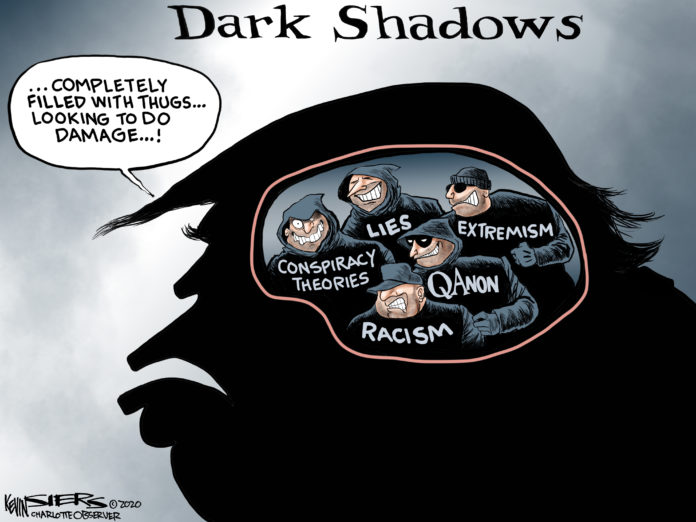 I lean leftward of many of my Democratic colleagues. But I’m not out on the fringe with idiots who think abolishing police departments would serve anyone but criminals. And neither is Joe Biden – nor former prosecutor Kamala Harris.

Down here in southwest Oklahoma, four of the five broadcast television networks beam in from Wichita Falls, where Republicans fear Democrats and other non-cultists might unite to dump Putin’s chump, deprive Trump of Texas’ electoral votes.

So, we’ve seen the first ad. A frail, elderly woman looks scared as she furtively searches for the noises outside her home. Then we see a home invader through the window. Our helpless victim-to-be tries dialing 9-1-1, but is put on hold because those hateful Democrats have defunded the police. And then the message, “You won’t be safe in Joe Biden’s America.”

From the Willie Horton ads of Bush the Elder’s 1988 campaign [which included the requisite Republican racist dog whistle] through today, Republicans try to paint themselves as the law and order party. They’re doing it this year – conveniently ignoring their impeached president and more than a dozen Trump aides, donors and associates indicted or imprisoned since he launched his campaign.

Despite repeated rebuttals from respectable sources, Graft’s Own Party trots out lie after lie to deflect attention from its members own crimes and corruption. [You’ll be happy to know that Sen. Jim Inhofe’s $400,000 insider trading windfall was approved by investigators of the Republican-controlled Senate.]

You read that right: “ … Trump-requested cuts to community policing programs.”

Dale’s story continues, “Biden has been attacked in other Trump ads for his tough-on-crime past positions as a senator for Delaware. And Biden has repeatedly described himself … as an opponent of the idea of ‘defunding the police,’ saying he prefers instead to condition federal police funding on whether local departments meet standards for good conduct and introduce needed reforms.”

In July, Daily Kos reported on a Civiqs poll that found only 6% of the nearly 1,500 people surveyed agreed with abolishing police departments. Just over 25% of the folks advocated “defunding,” or cutting police budgets.

Also last month CNN reported Joe Biden’s common sense agreement with the majority. Biden “has repeatedly described himself … as an opponent of the idea of ‘defunding the police.’”

And speaking of defunding, it is Trump himself who now threatens to strip federal funding from governmental entities whose elected officials oppose his incitement of violence in their jurisdictions – their police departments included.

“Biden has largely limited his recent comments on policing to these federal funds,” Dale wrote. “In June, though, he said decisions about local police budgets should depend on the needs of particular communities, since some departments have too many officers and some don’t have enough.”

Gosh, local control to handle local problems. That was once a Republican tenet – when that party’s platform was not attached to a swivel to keep up with Trump’s latest whim. But recent top-down fiats from DC and various state governors and legislatures [Oklahoma included] on issues such as local wages, local environmental safety and local health issues have made that a thing of the past – as foreign to the current GOP as a strong international presence, defense or otherwise.

So, Joe Biden disassociates himself from his party’s wackos, unlike Trump, of the lying birther conspiracy lies himself, who endorses QAnon as the future of the party, welcomes them into the mainstream of his personal sewer.

How deep is that sewer?

During the Trump Cult National Convention, the party formerly known as Republicans aired a video of fires burning in the street as “a taste of Biden’s American.”

Greg Graziosi of The Independent reports “that the images in question – of fires burning in the streets – were captured in 2019 in Barcelona. The protests in Spain began after a Spanish court sentenced Catalan separatists to prison.”

Support a person with more than 20,000 lies to his discredit since taking office three-and-a-half years ago, and lying becomes second nature to you, too.

Let’s not forget, either, that the elderly woman pictured in the anti-Biden ad is a member of the generation that Trump, McConnell, Graham, Stitt, Abbott and the whole lot of those public Christians [one of whom doesn’t even know how to hold a Bible, much less where to find “Two Corinthians”] consider expendable to the pandemic in order to protect Wall Street – and who will lose Social Security if Trump is re-elected.

Talk about being safe in your own home. Greed’s Own Party’s calculated inaction on the COVID-19 pandemic has made the entire country a battle zone, where a tiny virus that Republicans refuse to address threatens the lives of everyone, the elderly in particular.

Trump stokes hatred and divisiveness throughout the country, encouraging stochastic terrorism from right-wing hooligans against his enemies. And let’s be very clear here. What is anti-antifa, but “profa” – pro-fascism? By aligning with Hitler, Franco and Mussolini, these profas define themselves as traitors to our ideals.

Then Trump unleashes a private army of storm troopers to ratchet up violence for law-and-order photo ops. He is not advocating law and order. Rather it is open contempt for an orderly society and the laws designed to keep it so.

The destructive results can be seen on the news every day, right now in Donald Trump’s America.