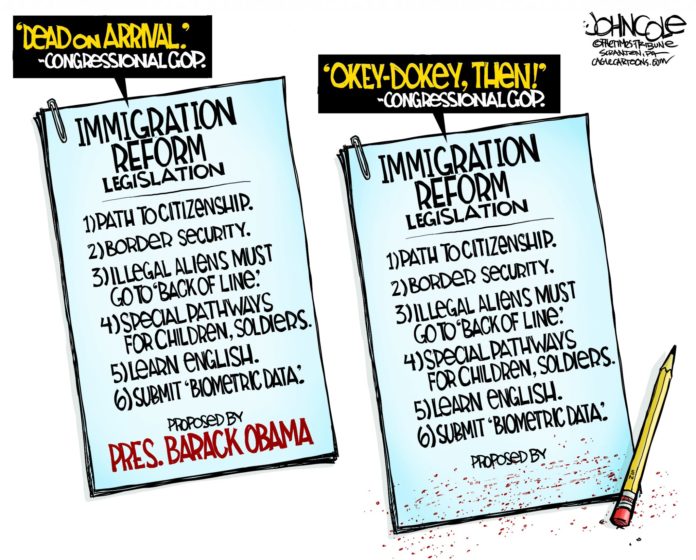 There’s a funny thing about thoughts – sometimes they swirl and strike each other tangentially, finally coalescing into a single stream. So it has been, thinking about Congress, immigration reform, the upcoming papal conclave, bishops and the basic condition of the poor.

After celebrating President’s Day, the swirl of thoughts settled on two names, Toribio Romo and Stanley Rother. Although they never gained media prominence they talked the talk and ultimately walked the walk.

Toribo Romo Gonzalez [1900-1928] is actually Saint Toribo Romo, Roman Catholic patron saint of Mexican migrants, border crossers, people of Tepatitlan De Morelos, Jalisco, Mexico. He was one of about 40 priests killed by federal forces during the Mexican Cristero War [1926-1929]. He was canonized by Pope John Paul II May 21, 2000.

Sometimes known as the “Holy Coyote” [Coyote is the name given to those who smuggle people across the border] stories began to emerge during the 1970’s about encounters with St. Romo by those lost in the desert. The gist of the stories is of a priest coming to the aid of the lost, providing water and perhaps transportation to a safe haven. He tells them to come visit if they are ever in his hometown of Santa Anna de Guadalupe, Jalisco.

It wasn’t until the traveler would attempt to visit the priest that they learned of his violent death many years before their encounter. Romo was killed in front of his sister at her home on Feb. 25, 1928. His body was stripped and tied naked behind a truck and dragged to the town square.

It is with St. Romo in mind that recent actions of the American Catholic Bishops take on added interest. There is no doubt the Bishops have long supported immigration reform. Nor is there any dispute that Latinos are the fastest growing segment of the Roman church.

There is nothing on record indicating St. Romo ever asked those he is said to have helped about their sexual orientation.

Stanley Francis Rother [Mar. 27, 1935-July 28, 1981] was a farm kid from Okarche, OK. He was ordained a Catholic priest May 25, 1963. After serving as a parish priest for several years he volunteered for a mission in Santiago Atitlan in the Guatemalan highlands in 1968.

The Guatemalan odyssey in which Fr. Rother found himself began in 1954. CIA-backed forces lead by Col. Carlos Castillo overthrew the democratically elected government of Jacobo Arbenz. By 1954 standards, Arbenz was considered part of the communist threat, especially when he moved to nationalize plantations owned by the American corporation United Fruit Company.

The government targeted peasant farmers and Indian villages such as Rother’s parish, took away reforms and began a reign of terror that exploded into civil war in 1960. Civilian rule was restored by 1966 by government counterinsurgency activity.

In 1970 the country was placed under a state of siege by President Cesar Mendez. The Guatemalan army was being trained by the CIA and U.S. Army which promoted a scorched earth policy similar to that used in Vietnam [which had worked so well as noted in the recent book Kill Anything That Moves by Nick Turse].

The military received weapons support from Israel. Tactical support on how to terrorize and interrogate the population came from Argentina which was willing to pass on the tricks they had developed in their “dirty war” against possible communists.

By early January 1981 the war had come literally to Fr. Rother’s doorstep when a parish worker critical of the government was dragged from the porch of the rectory into a waiting car by masked men. This was not the first disappearance in the region; in all, 11 men had disappeared and were later found dead or never found at all.

Fr. Rother’s work with the indigenous population eventually brought him into disfavor with the army and the paramilitaries in the region. The Archbishop of Oklahoma City ordered him out of the region when his name was placed on a death list.

By late January 1981 Fr. Rother was back home in Okarche, but unhappy at having to leave his parish. The new conservatism had overtaken the country and Ronald Reagan had been elected president. Along with Reagan came a reinforced struggle against anything that might be called communist, particularly Central and Latin America insurgents.

Fr. Rother responded in late March 1981 to this new depiction of the Guatemalan situation by telling a parish group in Oklahoma City, “Don’t believe everything your government tells you.”

Oklahoma was already beginning to turn red and anything critical of Ronald Reagan or his administration was subject to repercussion. Fr. Rother’s statement was one of those criticisms.

One listener wrote the Guatemalan embassy in Washington DC, “I feel obliged to warn your nation’s government of the Church involvement with the leftist organizations to establish a socialist government in Guatemala.”

Ironically Fr. Rother was never a member of a leftist organization; rather he was noted for being apolitical.

He returned to his parish in the highlands in time for Holy Week services. He had been told his name had been taken off the kill list. This was a ruse.

On July 28, 1981, three masked men entered the rectory. They made their way to Fr. Rother’s room where a fight ensued; it is assumed they were trying to kidnap the priest.

According to a witness Fr. Rother shouted, “Kill me here.” Shots rang out and the boy from Okarche, the shepherd who would not leave his flock, was dead.

A year later U.S. Army-trained Gen. Efrain Rios Montt took control of Guatemala, launching perhaps the most brutal phase of the civil war in which thousands of indigenous peasants were tortured and summarily executed.

Today violence is still a problem. Crime, not the government, appears to be the major problem.

These are the things that race through the mind on a three-day weekend when all the politicos are in recess and in their districts shaking babies and kissing hands.

About St. Romo and immigration: it would be interesting to know if any members of the Council of Bishops have sought enlightenment from St. Romo. His major shrine is in Santa Ana de Guadalupe, Jalisco, Mexico. However, they need not cross the Rio Grande as the only American Shrine to the saint is at the church of Saints Peter and Paul in Tulsa, OK.

This is particularly interesting because Oklahoma was the first state to follow Arizona in passing stricter illegal alien laws. The legislation was spearheaded by former Rep. Randy Terrill who is awaiting trial on corruption-related charges.

Fr. Juan Pablo Robles of Sts. Peter and Paul says the devotion to the shrine of St. Romo continues to grow.

As for Fr. Rother, how does one compare a martyred priest with a congressman such as Jim Bridenstine? One died providing aid and comfort to his flock, the other says aid and comfort must be ransomed at the altar of his ideology.

Looking at the lives of both men and thinking about the attorneys general – such as Oklahoma’s Scott Pruitt [Perry Mason and Ben Matlock have more trial experience] – fighting affordable healthcare for the poor, one can’t help but wonder about the concept of being a shepherd.

Fr. Rother’s body was buried in a family plot in Okarche. His heart was enshrined in his parish church by his Tzutujil Indian parishioners along with a jar of his blood scrapped from the floor on which he fell.

As of last week Gen. Rios Montt, who lists his profession as an evangelical minister, was declared eligible to stand trial on charges of genocide by a Guatemalan judge.

Fr. Rother has been placed on the path to Sainthood.

Finally, considering the stonewalling in Congress and the vitriolic political attacks heaped on this administration, the question does arise: how much is honest politics and how much is a shroud for latent racism?

This question spawns a second question: if racism is the root cause of the discourse, what will conservatives, especially Roman Catholics, do if they get their first Latin American or African pope?

– Richard L. Fricker lives in Tulsa, OK and is a regular contributor to The Oklahoma Observer. His latest book, The Last Day of the War, is available at https://www.createspace.com/3804081 or at www.richardfricker.com