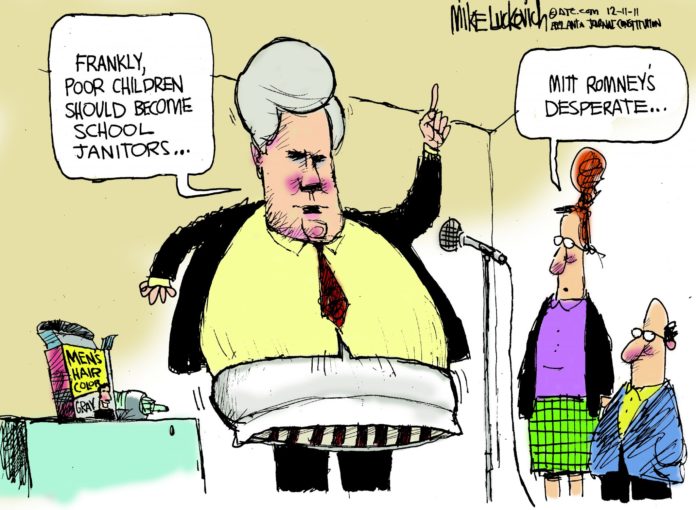 Newt Gingrich’s suggestion that we put poor children to work as school janitors is flawed on many levels.

He insinuated that poor people have no work ethic. Perhaps some don’t, but struggling people I know work two or more minimum wage jobs just to feed the family and keep the heat on in winter.

Their children see this work ethic in practice, and they know what it has gotten their parents. Not much.

A part-time janitorial job will not make the family more prosperous, but it can rob a child of education and a childhood. I’ve seen it happen to 16-year-old students, and I don’t want it to happen to a nine-year-old.

The mother of a former student wanted her held-back 16-year-old son to quit school and get a job. She worked seven days a week for low wages, and it wasn’t enough. At 16, however, her son hadn’t yet had a chance to learn a trade, so it was likely he would have been stuck in a dead-end job just like his mother’s. She wasn’t a bad mother, but sometimes it’s hard to see a future through the pain of the present.

Then, there are the janitors at the rural school where I worked. One told me he earned about $14,000 a year. The janitors have health insurance, but if they want their children covered, it takes more than half their salary to pay the premium.

Does candidate Gingrich begrudge them this safety net? They need the job; they don’t have access to a sugar daddy like Freddie Mac.

Professor Gingrich the historian needs to look back at the photographs of Lewis Hine to see why we passed child labor laws in this country. Of course, if we put grade school kids to work, we may not need to provide them a secondary education. That’s only a temporary budget fix, however.

Children need responsibilities – feeding the dog, sorting the laundry, mowing the lawn, doing the dishes, finishing homework. They can babysit, rake the neighbor’s leaves, or shovel snow. We don’t need to farm them out for wages.

Gingrich is like the Michael Keaton character in the movie Night Shift. Keaton called himself an idea man and he threw out gems like, “What if we feed mayonnaise to tuna fish? We’d have ready-made tuna salad.”

It might be fun to sit across the table and brainstorm with the current Republican front-runner, but please, dear good Lord, don’t let this idea man become president.