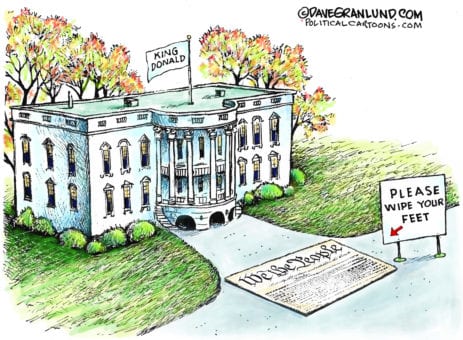 Impeachment And The Threat Of Violence

Donald Trump and his allies think they can bully the impeachment process to an end by blocking the proceedings as much as they can and by using propaganda to rile up their base to threaten violence if Trump is removed from office. That may be how white supremacist America does things, but that is not how constitutional America works.

The threat and actual use of political violence have long been tools of white supremacists. This is one of the main reasons they insisted on the right to bear arms to control the millions of persons they enslaved for centuries.

They used violence to occupy indigenous persons’ lands, murder indigenous people, and violently remove them from their homes. It is no wonder Trump looks up to Andrew Jackson.

They used violence to intimidate, torture, and kill black persons after their use of violence to preserve slavery failed. Violence is the political “go to” button used by white supremacists if they don’t get their way by other means.

In spite of these threats, the impeachment process will continue. No bullying or threats of violence will stop it. In spite of these threats, the president will be impeached and brought before the U.S. Senate for a trial as prescribed by the Constitution of the United States of America, and if Republicans put party and power over country to unjustly acquit the president, he will still be removed from office in 2020 by a vote of the people.

Trump has often used the white supremacist dog whistle that he is a “law and order president,” yet when the enforcement of the law brings him ever closer to justice, he argues that he is above the law and encourages his followers to threaten disorder. Bullying, guns, and threats of civil war cannot win the day.

The wheels of justice must keep on turning, and those turning those wheels must take courage no matter what the white supremacists threaten to do.

It might be only the Second Amendment in the U.S. Constitution, but it is first in the hearts of Oklahoma Republicans. Last week, Gov....
Read more