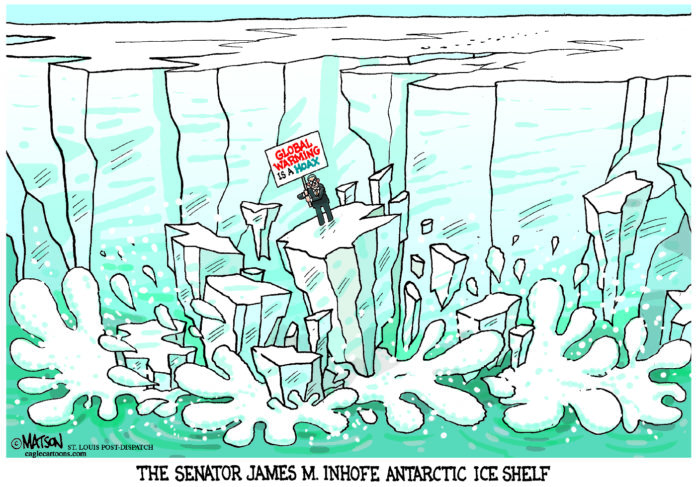 Inhofe, The Oracle has a new book, The Greatest Hoax.

Oklahoma’s U.S. senator apparently bases his idea that there is no such thing as man being responsible for global warming or anything else on the planet on:

“While the earth remains seed time and harvest, cold and heat, winter and summer, and day and night shall not cease.”

According to The Oracle:

“ … My point is, God’s still up there. The arrogance of people to think that we, human beings, would be able to change what He is doing … is to me outrageous.”

So, I think that just flies in the face of everything I was ever taught about man having a free will and that God has a permissive will that allows man to do whatever he wants – you know, sin.

Obviously, The Oracle is saying man cannot only do whatever he wants, but there are no consequences ON EARTH. We cannot possible destroy anything God created as long as … see above.

If The Oracle says it, that makes it so.

I am 65 and from as far back as I can remember, Sunday school lessons and sermons told me I was to take care of God’s creation, but it seems there is no need.

There is still seed time and harvest [maybe not in the same fields], cold and heat [50 days over the average number of 100-plus days in Oklahoma], winter and summer [a little iffy], and day and night, but there is still radiation sickness in Chernobyl and people are still living with birth defects that were likely caused by the bombs we dropped on Hiroshima and Nagasaki.

There are still dead fish showing up on the Louisiana coast, we don’t yet know all of the consequences of the tsunami hitting nuclear reactors in Japan last year, the Arizona is still at the bottom of Pearl Harbor and agent orange is still destroying the lives of my generation because of Vietnam.

God needs to stay up there and stop messing with Inhofe’s friends in the energy sector. God is just picking on the energy industry.

OMO [Oh, My Oracle], that would mean people cannot choose to be gay because that would change what God is doing. The Oracle is saying God creates gays and The Oracle and Pat Robertson can’t stop Him?

Prepare, yourself, Okies to be embarrassed because on Tuesday. MSNBC’s Rachel Maddow will allow Inhofe to say whatever stupidity he wants.

She can’t stop him because God created Inhofe in His own image.