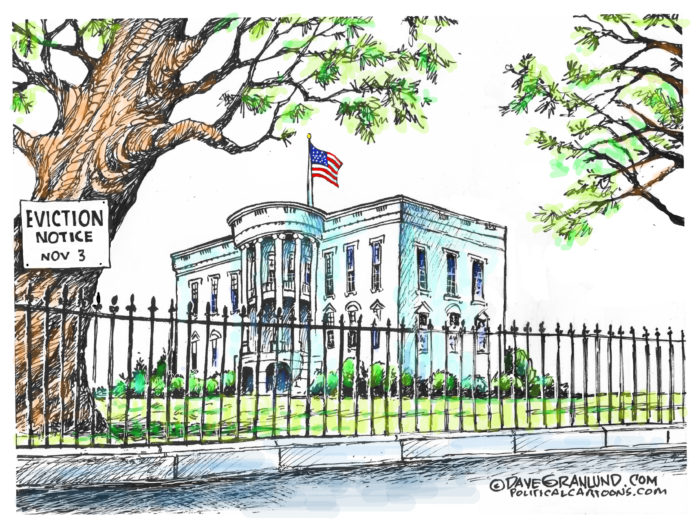 Inspired To Rebuild Our Nation

Of course Joe Biden picked the absolutely correct person to be his running mate. With the cast of candidates he had available to consider for the job, Kamala Harris emerged as the obvious best choice for a variety of reasons, some known to us and some not.

In any event, the final outcome showed the world and the nation that the Democrats can field a very large group of very capable women to perform very important and necessary work to rebuild our nation in every way.

This pick, in the face of the pandemic that makes the political campaign season a virtual event, inspired me to once again take heart and begin doing what I’m able to make sure that the healing and rebuilding goes forward.

That’s forward as opposed to backward. Backward is what Trump and his collage of very bad and counter-productive acolytes, minions, ass-kissers and operatives do every day.

Take Mark Meadows … please. He is a founding member of the owned and operated “freedom caucus.” The Koch Brothers hijacked the Tea Party and weaponized it to validate their virulent hatred for the first non-white president. Meadows, from North Carolina, fell right in line. Now, he is filling Trump’s vapidity with counter-productive, backward-thinking, fiscally idiotic nonsense and making Trump think that he thought of it himself.

Our Education Department, like so many in this administration, is headed by someone hell-bent on destroying public schools for the sake of her mindless, backward and Dark Ages views on how schools should operate and what religious-based curriculum should be taught. But wait. Her schools will be only for those who can afford them. Everybody else? Well, too bad. This is pure 15th century ideology, so, naturally, Trump latched on to this multi-million dollar donor, Betsy DeVos [of the disgraced Amway empire], to screw that up, too.

Looking down the list of current and former cabinet members and “advisors” [They don’t really advise Trump. They just say stuff to him and when he likes what they say, he tells it to Sean Hannity as if it was part of his brilliance.], we see a gallery of wretches that couldn’t make it anywhere else except on Wall Street or in Republican politics. And here we are after almost four years of utter incompetence, fundamentally wrong-headed leadership from a psychopath and the danger of having our elections destroyed for the sake of one man’s ego.

Did I mention Bill Barr’s complicity in turning the Justice Department into Trump’s playpen?

We have an American dying from COVID every 80 seconds. We’ve lost all standing with our traditional allies. Even Canada has told us to stay the hell home. Our economy is teetering on the brink of utter collapse, and the Senate Republican traitors are squirming and twisting to try to get dirt on Joe Biden while telling the unemployed, the ill-housed and the hungry in our nation to just gut it out. It boggles the mind to see these multi-millionaires haggling over $200 per week unemployment benefits, eviction moratoriums and threatening the healthcare that keeps these people from literally dying in the streets. Oh, wait. The are dying in the streets. Our homeless population has quadrupled since March.

What we’re really seeing is the culmination of the Republican Party’s attack on the New Deal and any rational substitute for the programs they’ve hated since 1934 before the ink was dry. The party’s donors have been let loose by Citizens United v. FEC and Lewis Powell’s 1971 “manual” of how to dismantle democracy and turn America into a capitalistic-fascist state.

Add to that the fundamental corruption and incompetence in the State Department led by somebody who competes with Bill Barr in the Jabba-the Hutt look-alike/act-alike contest, and we have, as Stan said to Ollie, “ … a fine mess.”

We have our work cut out for us. By “us,” I mean those of us who still have reverence for democracy and the Constitution. As with all of my brethren who served this nation, I took the oath that said I would “protect and defend the Constitution against all enemies foreign and domestic.”

We are now plagued by the greatest domestic enemy in our history. The enemy about which I write is not just Donald J. Trump. It is his entire cabinet and the Congressional Republicans who enable him. It includes the Republican governors who were so eager to kiss Trump’s ass over re-opening during the pandemic. It includes the Republican state legislatures around the country who are working overtime to suppress voters’ rights and gerrymandering districts to their advantage.

These are the enemies of the state. They must be defeated, or we will soon lose any semblance of democracy and ability to function as a nation. As with Rick Wilson’s great book title Everything Trump Touches Dies, he is touching our nation at all levels and each time he does, it dies a little more.

Not only must we vote out the Trump Administration, the Biden/Harris coattails must extend deep into the state and local ballots to remove the Republicans who have eschewed their constituents for ideological purity. That “purity” for Republicans is: Take from the poor to give to the rich. Ignore the infrastructure because that takes money from the rich. Let education become private because that gives more money to the rich.

I know it sounds a lot like the Nottingham Forest of yore, but here we are fighting the same battles that the idealistic Robin Hood fought.