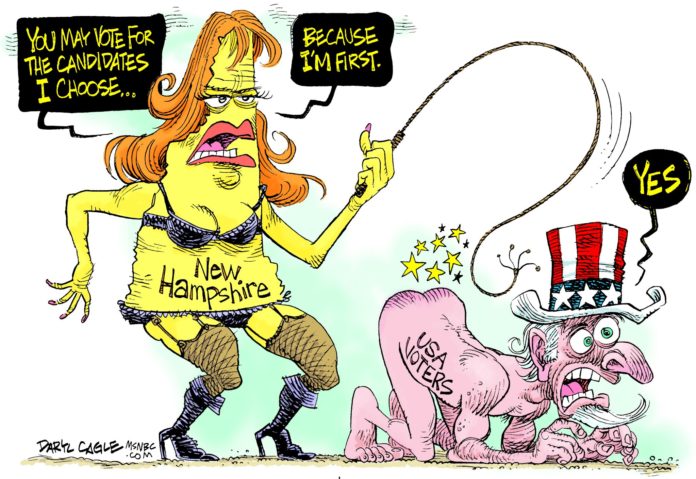 This just in: The results of the Iowa caucuses are official and the winner is Barack Obama! I got that line from David Letterman, but the Letterman-Colbert-Stewart triumvirate is often more politically astute than those getting paid to analyze politics [instead of making fun of it].

The Iowa caucuses were held three days into the new year. Three days! As you read this, the New Hampshire Primary is just a few days away. That is why these to states are so important. They’re first. And they will always be first.

New Hampshire is not a bellwether state, in spite of the legend the press quadrennially reports. It goes like this: “No one wins the presidency without first winning the New Hampshire primary.” Is that true?

Yes, it is, even though Bill Clinton lost it in 1992 [to New England favorite Paul Tsongas] and went on to win the presidency. But it is a phony statistic. The legend is comparable to this baseball statistic: “No team ever won the World Series without first winning a pennant.” Well, yeah, but there are a lot of teams who won a pennant but did not win a World Series.

There is more. What happens in these two states is not just about winning. You would think that would be the case. You would be wrong.

It’s all about expectations. This is clearly indicated in the 1968-1972-1976 cycles. Those three elections showed how the press treats these early “events” and why winning is not always the most critical factor.

First up is 1968. The thing to remember about this year [other than that it was a presidential election year] is that it was the year of the Tet offensive in Vietnam. Because of this, Lyndon Johnson, the Democratic incumbent, was challenged in New Hampshire by the little known liberal candidate Eugene McCarthy.

What happened? What happened was that McCarthy did much better than expected. No one expected a little known candidate to come within about 10 percentage points of an incumbent. The result was that McCarthy suddenly became the darling of the media. He did much better than he was expected to do. All of this Democratic jockeying resulted in a victory for the Republican, Richard Nixon.

After the Democratic debacle of 1968 the Democrats started grooming Edmund Muskie as their frontrunner for the 1972 presidential election. Then came the New Hampshire primary. Muskie won it, but not only did he not win the presidency, he failed to get the Democratic nomination [the phony statistic resurfaces].

First, while covering the campaign in the state the media asked Muskie about his wife’s drinking problem. According to the media, Muskie became emotional and started crying. In case you haven’t read the rulebook, there is not crying in presidential politics [especially when your opponent is Richard Nixon]. Some reporters closer to the candidate later noted that the apparent crying was merely snowflakes melting on the candidates face, but the damage was done.

Second, Muskie was the frontrunner going into New Hampshire. Yet, once again the media became fixated with another unknown – George McGovern – who also came within about 10 percentage points of beating the frontrunner. The media described McGovern as winning a “moral” victory, and he didn’t even win his home state in the general election against Nixon.

By 1976 the media had been criticized for focusing on these outside chances rather than just reporting the facts. The result was that they pledged to do just that in 1976. So, all the headlines conveyed was that Jimmy Carter won the New Hampshire Primary. That was true. The problem was that if ever there was a need for the media to elaborate on how Carter won, it was that year.

Carter won the primary with only 23% of the vote. The media [under their new approach] kept repeating he was the winner [not that he failed to get 77% of the support of voters]. Carter went on to win [once!].

The problem for Republicans right now is that hardly any of the talking heads think the candidates are expected to do well. When no one expects you to do well, then hardly ever will you. So, we are back to Letterman’s joke and the conclusion – it is President Obama’s to lose.

– Dr. Danny M. Adkison teaches constitutional law at Oklahoma State University and is a regular contributor to The Oklahoma Observer