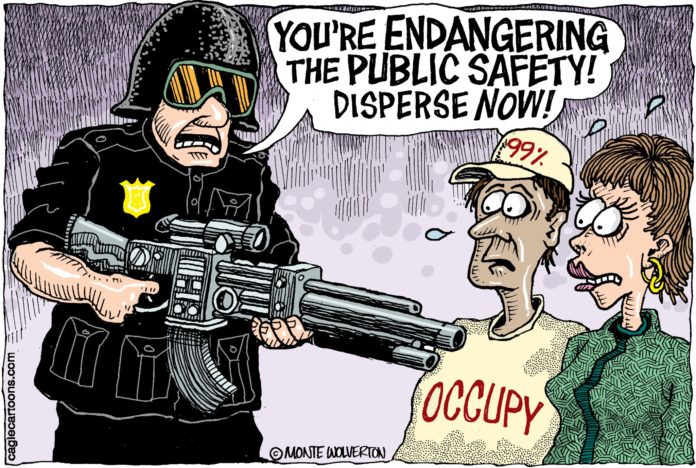 It is unique in this trade, profession or even perhaps calling we know as journalism that we detach ourselves from critical moments of history to get a story from the present to the reader in an orderly fashion. It is unique in that, with any luck at all, we can describe and convey the texture of a moment, mood of a person or people, the intensity of an event and still with any luck remain aloof, apart and detached.

Monday night, as hobgoblins trekked from door to door across America I wrote the obituary of a man whom I had never met and whose name I did, still do not, know. I know only that for a brief moment in time his words as a poet struck a chord with a small group of people huddled in Kerr Park in Oklahoma City under the socio-political umbrella of OccupyOKC.

This group has gathered as part of a movement spreading across this country. I knew the group, taken with the young man’s words, had embraced him as their laureate. Their affection for this homeless man and the common ground of the occupy movement had given him the courage to plan a future.

According to OccupyOKC spokesman Mark Faulk, the young man had discussed the possibility of traveling the country to visit the Occupy sites in other cities. He wanted to encourage others in the movement to stand fast.

I do know this: he did not die alone, he died loved, he died admired and he died un-judged by his companions.

When we first ran this story we quoted Faulk as estimating The Poet’s age at middle twenties.

Late Tuesday night Faulk told the Observer, “According to an interview The Poet did a few days before he passed away, he was 18 years old. I had no idea, as the strain of living on the street can make it difficult to determine age by the usual criteria. And that makes it even more tragic. 1.5 million homeless children in America, 100 million worldwide. This is a monumental failure of our system and a lack of compassion in our day-to-day lives.”

His cause of death will be determined by a pathologist/coroner, paid for by the government. The homeless poet will at last have an attending physician.

He won’t need insurance for the autopsy. The law requires an autopsy for unattended deaths, in case there has been a crime, for which someone can be caught and punished.

The authorities have already stated there is no suspicion of foul play. The young poet died anonymously in his sleep.

If the mean-spirited elements of this country prevail, there will be no money to protect the health of future street poets. These elements will allow him to die from, and in poverty, and anonymous. But there will always be jails when they sleep in public parks or panhandle on the streets from those offended by their appearance. We will always have money for prosecution and punishment.

His comrades in arms remain; they are the thousands in tents in parks across this country demanding to be heard. His comrades want to feel they are a part of this republic. They want to know they and their lives count for something besides numbers on a banker’s spreadsheet.

The people of the Occupy movement are The Poet, faceless and nameless to the politicians and corporations consumed with ideology and profit. The Poet will no longer have to worry about overdraft charges, late fees, adjustable interest rates, unemployment, health insurance costs or any of the other daily trials to be faced by those he left behind.

The faceless, nameless veteran, who only a short time ago was a “Patriot” the symbol of American freedom, is returning home to joblessness, medical problems and a system all too willing to keep them faceless and nameless. Our veterans are the poem of The Poet.

The homeless, jobless, those drowning in debt brought on by fees and special charges are the poem of The Poet.

I never heard his poem the night before he died, the night he left the camp compound speechless. I didn’t have to hear his words, because I heard the people who were there to listen when he spoke.

But I have heard this brief 40-second clip recorded by Beth Isbell at the campsite. He is the voice of a young generation of Americans. This generation knows about drugs, homelessness, about being tossed into the dust bin of a society that, because of computer databases will never, NEVER, forget or forgive a transgression, no matter how minor or how much rehabilitation has taken place, the transgression remains.

Hear the words of this still nameless young man:

This one man uttered words that moved a hundred strangers.

The hundred strangers are but a small part of the thousands of voices of the poem all wanting to be heard.

What is not known about his poem born of the masses … is anyone listening?

– Richard L. Fricker lives in Tulsa, OK and is a regular contributor to The Oklahoma Observer, providing both essay and video commentary. His latest book, Martian Llama Racing Explained, is available at http://www.richardfricker.com.