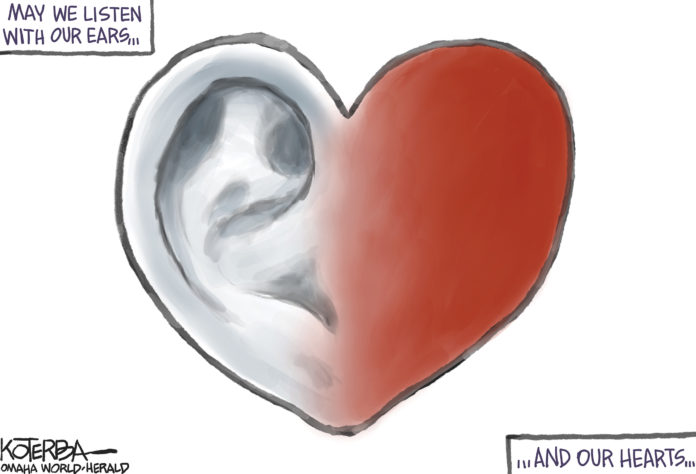 Is There Anything We Can Agree On Today?

The men from the states were white, black, Hispanic, Native American, Asian and several other races but they had one commonality – when they bled the blood was always red and when they died, and thousands did that day, others close or far away hurt and felt the loss. Some of those affected by their demise never recovered.

Death is like that. Terminal, final and permanent, whether the person led a life of greatness and perfection [probably none have] or an existence of pain and problems [undoubtedly all have to some degree or another].

Plumbers and painters, carpenters and sharecroppers, doctors and do-nothings, farmers and fancy dancers all dashed ashore hoping to live for another minute, hour or day in an epic cause called World War II orchestrated against a tyranny called fascism.

Adolph Hitler was in his 11th year as the cruel and heartless dictator of warlike Germany while Franklin Roosevelt was nearing the end of his third elected term, and 11th year, leading the freedom and peace loving United States of America – at least that’s what the history books say. [Footnote: Those same history books mostly don’t say anything about the Tulsa race riots that began 99 years ago in 1921 and saw the burning down of most of black Tulsa – the Greenwood District – not by dark-skinned rioters who lived there but by their paler complexioned neighbors to the east and south].

Funny thing about history. It doesn’t matter much to folks who don’t know about it. For example, say the words Greenwood and Normandy to friends at a cocktail party and let me know the responses. I’ll write a column about them.

But forgive me. I strayed from the war so let’s return there.

Good versus bad, kindness versus evil on the side of those who came ashore, or tried, plus the 18,000 paratroopers who preceded them in the darkness. No doubt Gen. Dwight Eisenhower’s warriors meant it when they said, “We’re all in this together.” It was that simple and true on June 6, 1944 when the Allies began the invasion of Europe.

However, it has not been that simple and not that true in our country since. Not through Korea, Vietnam, the Murrah bombing, 9/11, Gulf Wars aplenty and not today during coronavirus and/or the George Floyd events known variously as uprisings/protestations/riots or even the end of democracy as we know it. We’re all in this together now, everybody says at the end of every speech or newscast, but not everybody means it.

Certainly not the looters in Philadelphia overnight who ransacked the only two quality grocery stores in an area that is known by sociologists as “food deserts.” At one outlet the troublemakers had to back a pickup into the reinforced doors to gain access but by this evening it will re-open, fully re-stocked by its 600 employees, who mostly live locally, while the second store will return to business by Monday. Just remarkable.

The evil doers? Many identified as strangers from other areas, towns, neighborhoods, blocks or sub-divisions. They were mostly black, destroying stores serving mostly blacks. That’s not a message of “Black Lives Matter.” No, that is a message that black lives, nor of any other color, do not matter to them.

Funny thing. A world war can unite in a way that racism cannot, or has not. Today is a historic day indeed, June 6, noting an invasion 76 years ago on the way to ending a war; while 99 years ago, just a footnote, or even less, of a community destroyed in a 400-year war of racial hatred, still ongoing, perhaps intensifying, or maybe, just maybe, seeing the beginning of the end of it.

If, if it is the latter, the name, though maybe not the life and character of a 46-year-old nightclub bouncer and black man from Minnesota named George Floyd will join with those of Emmitt Till, Rosa Parks, Medgar Evers, Martin Luther King and thousands more already on the pages of history and will thus recognize the beginning of the ending of our shared nightmare known as racism.

For God’s sake let it be that and not just another bloody page in a book already too, too long.

After all, we’re all in this together.

– Cal Hobson, a Lexington Democrat, served in the Oklahoma Legislature from 1978-2006, including one term as Senate President Pro Tempore. His columns appear regularly in The Oklahoma Observer.