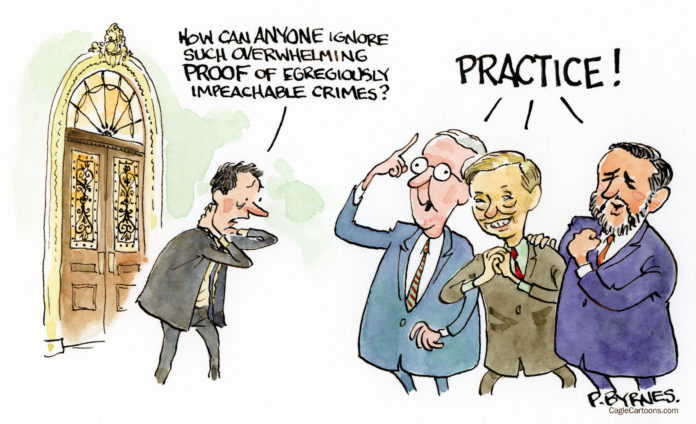 Lots of smart, patriotic and courageous citizens continue to post a rather obvious question. It goes something like this: “Why can’t Sens. Inhofe and Lankford, and so far 42 others, not see what is so clear and distinct to the rest of us? It was Trump’s endless huge lie for nearly a year that triggered the riot. That the only way he could lose would be if the election was rigged, thus stolen from him and by extension his supporters.”

Something along that line.

The reason is related to my headline above. The elephant incumbents, and Democrats as well, know the election process is so tilted toward them it is almost impossible for them to lose, thus they have nothing to fear.

So let’s take a look at some of those “tilts.”

In summary, these advantages, plus voter apathy, gullibility and often just plain ignorance, give incumbents the confidence that regardless of the their behavior, they will not lose the next election or any that follow. Why else would 15 sitting Republican senators not attend all or some of yesterday’s testimony and, of course, this group includes our two toadies, Inhofe and Lankford. However, you can bet they’ll be in their seats in a matter of hours to vote “see no evil, hear no evil, speak no evil” concerning the culpability of former President Donald John Trump for the riot in the capitol Jan. 6.

How crass. How arrogant. How disgusting. How awful and, of course, how often displayed. Why would we expect better now when we haven’t before? Just the opposite. Instead of punishing bad behavior we reward it, encourage it, praise it and re-elect those who deliver it, at least a majority of Okies do who still bother to vote.

Makes me dream of seeing at least mediocrity in DC. I’ve long given up on excellence.

And Speaker Carl Albert down there in Bug Tussle? Quit spinning in your grave. I can’t get any sleep up here in Lexington.