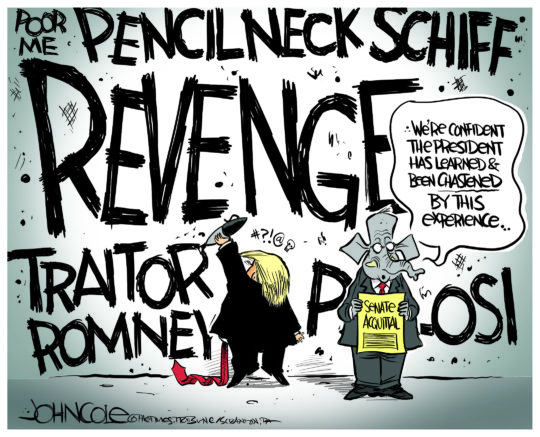 President Donald Trump didn’t wait long to humiliate the Republican senators who voted to acquit him with wan assurances that impeachment might check his worst impulses. Far from learning that he should not have extorted the Ukrainian authorities to interfere in our politics – as Sen. Susan Collins, R-ME, says she hoped he would – the president instead found out that he can abuse power without fear.

That is why Democrats in Congress must continue peeling away the layers of concealment and corruption to expose the truth about Trump, not only in the Ukraine affair but in all of the scandals under investigation by House committees. That is their constitutional responsibility, made all the more urgent by the abdication of the Senate Republicans who covered up Trump’s offenses. Having sworn an oath to act impartially, the Republicans colluded in his stonewalling defense.

Some Democrats may not wish to continue the investigation of Ukraine, fearing that they will be tarred as sore losers or some such juvenile nonsense. But if they believe what they told the nation about Trump’s misconduct – that he endangered national security and attempted to fix the 2020 election – then the Senate’s tainted verdict cannot stand as the final word.

Although some Republicans have now conceded that Trump actually did what the articles of impeachment charged him with doing, much more remains to be discovered about the Ukraine plot. And many Democrats agree, as Republicans complained, that the case against Trump ought to have included firsthand witness testimony.

With the impeachment trial concluded, there are no longer any time constraints to keep Democrats from going to court to compel testimony and production of documents. They should subpoena former national security adviser John Bolton, who has tantalized the nation with a strange striptease, sometimes promising and sometimes withholding his potential testimony. News accounts indicate that his forthcoming memoir, The Room Where It Happened, includes fresh information about the origins of the plot.

Bolton should be a prime target for congressional investigators not only because of the information he can provide but because Trump is still trying to intimidate him. In recent days, the White House has leaked threats that the president aims to prosecute his former adviser and prevent the publication of his book. If Trump and his minions can silence Bolton with authoritarian tactics, then the country will be on a very dark path indeed.

But there is more to this than John Bolton. When Americans expressed an overwhelming demand to hear from witnesses at trial, that meant they wanted to know the entire story and the roles played by Secretary of State Mike Pompeo, Vice President Mike Pence, White House acting chief of staff Mick Mulvaney, Trump lawyer Rudy Giuliani and all the other clownish figures who are already implicated.

We need the fullest possible accounting of their actions, from Mulvaney’s complicity in withholding military aid to Giuliani’s scheming against a U.S. ambassador. Lev Parnas, Giuliani’s indicted associate and accomplice in the plot against former Ambassador Marie Yovanovitch, has turned over thousands of pages of documents and vowed to testify if called. There are a lot of questions Parnas should answer in public, under oath.

So far, both House Speaker Nancy Pelosi and House Intelligence Committee Chairman Adam Schiff, D-CA, who ran the impeachment prosecution with skill and eloquence, appear equivocal about continuing the investigation. But the duty to complete the investigation is unavoidable – and walking away from that duty now would be a political mistake as well as a dereliction.

The Republicans aren’t letting go of impeachment, Trump or his stooges in the Senate. While the president menaces Bolton like a mob boss going after a snitch, Sens. Lindsey Graham, R-SC, and Rand Paul, R-KY, are threatening to expose the National Security Council whistleblower who first reported the conspiracy. In fact, Graham and others have said they plan a full investigation by the Senate Judiciary Committee on the origins of the impeachment probe. Among their key targets, of course, is Schiff – recently the subject of death threats by a heavily armed maniac who became agitated while watching Fox News.

Like a tough cop, Pelosi knows there is only one effective response to the lying and bullying of the Trump Republicans: just the facts, ma’am.