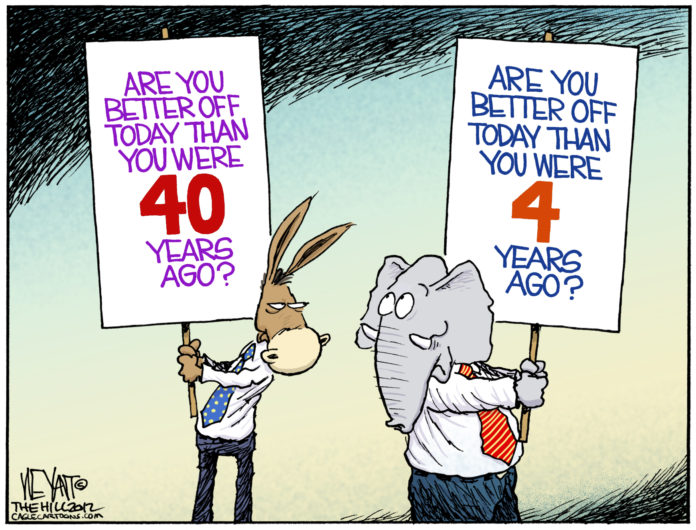 Keep Your Eyes On The Prize

Paul and Silas, bound in jail

Had no money for to go their bail

Keep your eyes on the prize, hold on

Republican presidential nominee Mitt Romney, his VP selection Paul Ryan and their GOP corporate-industrial handlers are asking if I’m better off than I was four years ago. Why not ask, “Are you better off than you were on Jan. 20, 2001?”

The answer depends on each individual’s life the day George W. Bush and his rightwing ideologues took the reins of government.

Thus far Bush, et al – who brought us the Iraq war, banking debacle, crowded prisons, and unemployment, offshore flight of manufacturing, along with social and racial divisions – have gotten a free pass on the problems they created for America.

Romney, Ryan and fellows want us to return to such heady days of conservatism. They want us to re-chain ourselves to an ideology that serves only a few and denigrates the masses. And, unfortunately, there are those who still see self-enslavement as a good thing.

These working class, poor and retired Americans who embrace the Bush-Romney conservatism were described by the Roman historian Tacitus speaking of the Britons nearly 2,000 years ago: “ … [T]hey who lately disdained the tongue of Rome now coveted its eloquence. Hence, too, a liking sprang up for our style of dress, and the ‘toga’ became fashionable. … All this in their ignorance, they called civilization, when it was but a part of their servitude.”

But others see the struggle for social and economic equality as ongoing. They see the hypocrisy of the last conservative government.

It is often forgotten that the last conservatives, as well as many present members of Congress, professed undying allegiance to the “sanctity of life” while killing tens of thousands of Iraqi women, children and non-combatant civilians as they played “wrack-a-mole” seeking Saddam Hussein.

Am I better off watching hard working Americans lose their jobs as corporate donors to Bush, Romney-Ryan move their factories offshore to avoid paying fair wages and benefits? Am I better off as the same donors lobby for tax breaks the unemployed will never receive?

Am I better off as I watch the hard-fought victories of the civil rights movement get slowly stripped away by the misshapen thinking of Supreme Court justices such as Antonin Scalia?

Have Americans taken their eyes off the prize? Do Americans really think eight years of sophomoric economic, social and foreign policy can be fixed by one man in half the time?

Do Americans really think these problems can be fixed when the opposition, while devoid of a policy of their own, have vowed to make the government fail, regardless of the impact on the country?

When in our history have we had an opposition that has made failure its avowed policy and have the audacity to ask reinstatement to power? When has that ever happened before the conservatism of Bush-Romney? When?

The prize is an equal and just republic for all citizens. We must keep our eyes on the prize.

I am reminded of the labor and civil rights struggles of the past. And, yes, I am better off than the days of no workers’ rights, voting discrimination, Jim Crow, and the other inequalities that plagued this country.

There is no silver bullet to slay the nightmares of injustice. After eight years of neo-conservatism and four years of a conservative Congress vowing failure – a vow made because this democracy said they had had enough of their policies so instead of moving forward they decided to take revenge on the electorate – can anyone expect the country to be repaired?

Americans must keep their eyes on the prize, a just and equal American for all who live here.

Thinking of the struggles reminds on the song of the civil rights movement, with preference to the Bruce Springsteen version.

Is America better off than it was the last time conservatives had the reins of power? We’re getting there … if we just hold on, hold on.