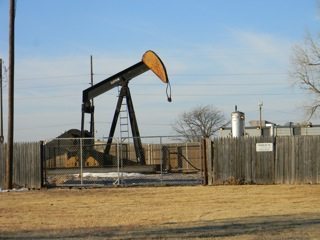 Keystone XL Not In National Interest

Here is information for readers who would like to help protect Oklahoma’s farmland and fragile aquifers.

TransCanada, a foreign corporation which has been bullying Oklahoma landowners, proposes to construct a 1700-mile pipeline, the Keystone XL, to carry raw Tar Sands crude, the world’s dirtiest crude, across the Midwest and from Cushing, OK, to Texas Gulf Coast refineries. The KXL would be an extension of the Keystone pipeline, put into operation in 2010.

There have already been 14 leaks from the Keystone pipeline. Can we expect better from the “KXL,” which would operate under similar conditions? There are no U.S. federal safeguards in place for the safe transport of Tar Sands crude. It is asphalt-like DilBit – toxic and corrosive and presenting special challenges for cleanup.

Natural gas in Tar Sands pipelines makes them vulnerable to explosions. An explosion in a Michigan pipeline sent Tar Sands crude into the Kalamazoo River and eventually into Lake Michigan. A year later the spill had not been cleaned up.

Will the KXL actually contribute net energy? The pumping requires enormous amounts of electricity which would probably be supplied in Oklahoma by coal. The Keystone pipeline has become the largest user of electricity in the state of Kansas.

Who will get the KXL oil, once it has been refined in Texas and has contributed to horrible air pollution there? Research indicates the oil is not destined for the U.S. market but will indeed affect us by causing a rise in gasoline prices here. [A TransCanada spokesman testified to the Canadian National Energy Board that part of the purpose of the Keystone XL is to raise the price of heavy crude oil in the Midwest!] Multi-national oil companies will reap the profits.

Supporters of the KXL are putting their hope in TransCanada’s promise of many jobs. However, the U.S. State Department says most of the jobs will be non-local and temporary.

What won’t be temporary? If contamination occurs in an aquifer [the Ogallala Aquifer, for example, is threatened] it cannot be undone. How many livelihoods – of farmers, ranchers, tourism personnel – will be disrupted? Wouldn’t this be devastating to our heartland agriculture?

Extraction of Tar Sands crude – strip-mined in the pristine Canadian Boreal forest [and projected to denude an area the size of Florida] – has been called the most destructive project on the planet and is a major source of carbon pollution in the northern hemisphere. Enormous amounts of water are used and leaks from waste ponds have caused soaring cancer rates among indigenous people. A staggering number of migratory birds are losing their habitat.

The KXL Pipeline is not in our national interest. There is unprecedented public opposition to this pipeline. Opposing groups include the National Farmers Union, Transport Workers Union, National Congress of American Indians, mayors, scientists, Nobel Peace Laureates and every major environmental organization in the U.S.

The pipeline cannot be built without permission from President Obama. Citizens have the opportunity to make official comments to the U.S. State Department.

To make oral comment in person, citizens may attend the Oklahoma public hearing on Sept. 30, at the Reed Center Exhibition Hall, 5800 Will Rogers Rd., Midwest City, OK. Comments of three to five minutes will be heard from 4:30 to 10:00 pm, in first-come, first-served order.

For written comments to the State Department, here are the:

Deadline for comments to be submitted is midnight October 9, 2011.

There is ample information online about the Keystone XL Pipeline. Two suggested websites are www.foe.org and http://dirtyoilsands.org.

– The author lives in Tulsa