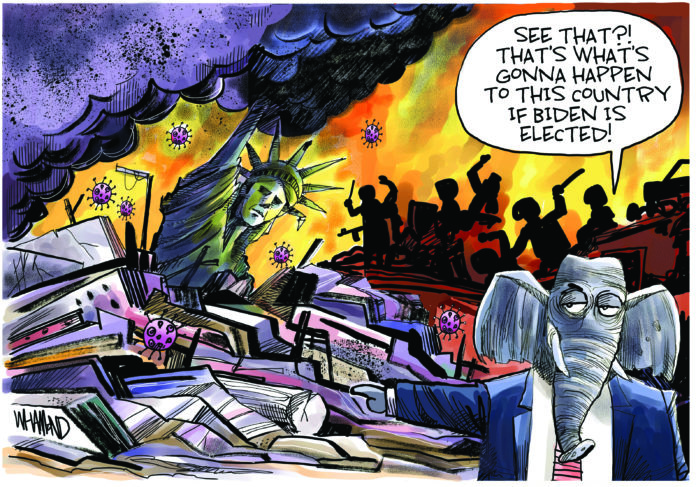 Those politicians formerly known as Republicans before they became Trumpista cultists claimed to advocate law and order. The evidence shows them and those who own them as confidence men and women continually on the grift, accumulating civil and criminal convictions at record rates and running to stay a state line ahead of the law while proclaiming their religiosity. [How are things in Georgia, Gov. Stitt?]

Oh, yeah. That’s right. Crony capitalism and corporate socialism and the unholy alliance they build with bribed politicians – directly, through contributions, with insider-trading tips, Sen. Inhofe? – are just white collar crimes. Nobody gets hurt – except those whose lives are destroyed by well-dressed brigands.

Trumpistas have no respect for the law. Phony charities. Phony universities. Phony companies getting government work from pals. Treasonously colluding with our country’s enemies for personal gain. Ignoring any law that might cost them a nickel.

What they want is order. Not justice, mind you, but order – with them giving the orders. And they are willing to create as much disorder as they can order to assert their claim.

Trouble in Portland? It has been more than a year since Huffington Post reported right-wing Proud Boys leader Enrique Tarrio boasting, “We’ve wasted all their f—ing resources to make this rally. We want them to waste $2 million and we’ll do it again in two months.”

Two months? Try for the next twelve.

At the same time, Joe Biggs, an Infowars staffer who helped organize those first rallies, bragged [again via HuffPost] that his mission was “a success because President Donald Trump sided with the right-wing extremist group against the anti-fascists.”

“Go look at President Trump’s Twitter,” Biggs told The Oregonian. “He talked about Portland, said he’s watching antifa. That’s all we wanted. We wanted national attention, and we got it. Mission success.”

Even more successful for the Trumpista playbook was Trump sending troops into Portland to quell the very disturbances he has been encouraging for a year. Great video of riots in the street – with strongman Trump “saving the day.”

This is the definitive illustration of stochastic violence. Trump encourages the klanazi right. They do his dirty work. He avoids [or tries to dodge] the blame due him for his violence-stoking rhetoric. And it makes for great video for lying campaign ads.

The people of Oregon know what is happening – and has been happening courtesy of Donald J. Trump for the past year. On July 17, Common Dreams documented the reaction:

“This political theater from President Trump has nothing to do with public safety,” Oregon Gov. Kate Brown said in a statement. “The president is failing to lead this nation. Now he is deploying federal officers to patrol the streets of Portland in a blatant abuse of power by the federal government.”

Sen. Jeff Merkley was even more critical: “These shadowy forces have been escalating, not preventing, violence. If [Acting Department of Homeland Security Secretary Chad] Wolf is coming here to inflame the situation so Donald Trump can look like a tough guy, he should turn around and leave our city now.”

And right on cue in this “political theater,” a Trump-thug “militia” teen from Illinois runs up to Kenosha, WI, to murder two people, setting the stage for Trump to send troops to quell violence of his own projection and Vice President Mike Pence to promise “law and order” for the streets of America – but not to protect peaceful protesters from right-wing goons, many of whom actually advocate a bloody civil war.