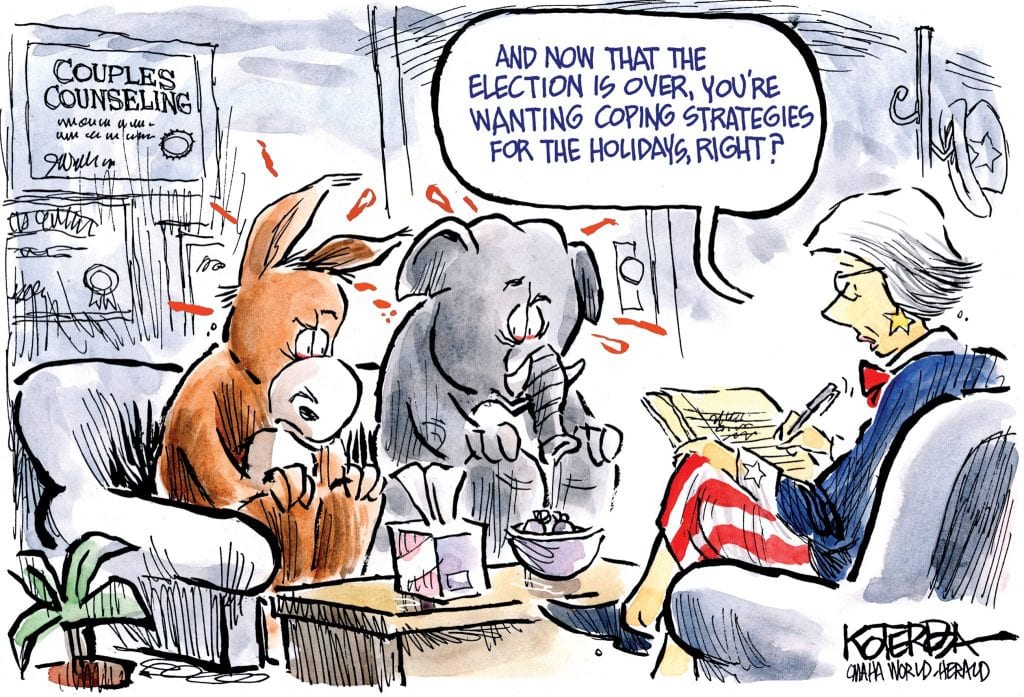 Tuesday’s election results in Oklahoma were a sobering reminder the American political system was not designed for an overnight revolution.

There was plenty of bad news for progressives – chief among them Drew Edmondson’s defeat in the governor’s race – but also bright spots – Kendra Horn’s election to a Democratic-controlled Congress and seven Democratic women winning legislative seats [five House, two Senate].

After a [mostly fitful] night’s sleep, here are some quick takeaways:

What more could Edmondson have done?

He drew a clear contrast between himself and the Republican gubernatorial-elect, Kevin Stitt. Two prime examples: more revenue for public schools, but not generated on the backs of the working class; Medicaid expansion to save rural hospitals and improve access to quality healthcare.

Edmondson was competitive financially in a $22 million-plus governor’s race in which Stitt was forced to “loan” his campaign $5 million.

And he and Linda worked their hearts out, criss-crossing the state to detail specific plans for a smarter, saner public policy and brighter future. It wasn’t enough.

Edmondson became the first gubernatorial nominee in Oklahoma history to capture a half-million votes … and lose.

Thank you, sir, may I have another?

Fifty-six percent of likely voters told the pre-election SoonerPoll they believed Oklahoma was headed in the wrong direction after eight years of unified Republican control of state government.

Yet voters largely kept the GOP legislative supermajority intact plus returned a Republican to the Governor’s Mansion – giving political newcomer Stitt a 54%-42% victory over Edmondson.

The voter disconnect is the equivalent of waking up each morning and shooting yourself in both feet.

It’s worth noting, of course, that voters expressed their discontent in GOP primaries and runoffs, ousting a dozen of their party’s incumbent legislators. But in Tuesday’s balloting, they remained loyal to their political brand – opting to elect different Republicans over Democrats.

Could it be Democrats next time if Republicans fail again?

We warned in the October Observer that Democrats faced a huge challenge retaining open rural seats. Not only did they fail to do so [losing one Senate and four House seats], but three incumbents also were knocked out – House Democratic Leader Steve Kouplen of Beggs, McAlester Rep. Donnie Condit and Tulsa Rep. Karen Gaddis.

How reliably red has rural Oklahoma become? If you take OKC out of the equation, only one Democrat serves in the Legislature from west of Interstate 35 – six-term Rep. David Perryman of Chickasha.

Is the political pendulum swinging back from the hard right?

Believe it or not, yes.

We’re not really sure how Stitt will attempt to govern. The campaign exposed his ignorance of state government and his political naivete – he seemed shocked to learn that Oklahoma has the nation’s highest incarceration rate, for example.

It’s difficult to imagine he’d attempt the chaos agenda carried out by Donald Trump, but who knows?

As for the Legislature, Republican hard-liners [think: far-right Liberty Caucus] were mostly ousted, hinting at a more moderate approach to legislating and public policy.

Of course, I use the term “moderate” advisedly. Oklahoma has lurched so far right this century that “moderate” more accurately describes anything other than the wingnut, knuckle-dragging fringe [or about two dozen members of the 56thLegislature].

Is there reason to believe the pendulum is swinging toward a more progressive future?

Yes … thanks to Oklahoma’s changing demographics.

First a brief history lesson: When the late, great Tulsa Tribune assigned me to cover the Capitol in 1980, Republicans were as scarce as Democrats today – only 11 in the Senate and 24 in the House.

My point? As mentioned earlier, our political system is not designed for overnight revolution. The Republican climb from irrelevance to dominance began in 1962 with Henry Bellmon’s election as the state’s first GOP governor. It took a half-century of chipping away – making the case for change – for voters to be persuaded to hand the statehouse keys totally to the GOP.

There is a sense in our high tech age that things change more quickly than ever – and that we are less patient when it comes to our elected elite. But Tuesday’s returns serve as a reminder that political change, especially for the minority party, often is more incremental – in fits and starts, two steps forward and three back. That is a lengthy discussion for another day, but suffice to say it all comes down to who votes and who doesn’t [Attention: Millennials and Gen Zers].

Why is this happening? Simply, these areas are increasingly populated by younger, often more progressive voters who aren’t motivated by the GOP’s historic stoking of the so-called social wars – the God, Guns and Gays playbook.

One other point: As Oklahoma’s population becomes increasingly urban, statehouse Republicans will have fewer options to gerrymander future legislative districts and avoid court challenges. Eventually, the Republican-Democratic divide will evaporate, just as it did between 1990 and 2010.

How did Kendra Horn fool so many experts and flip the 5thCongressional District?

Even though many political insiders – including Republicans – long predicted the Oklahoma-Pottawatomie-Seminole country district would be the first to turn blue, few seemed to think this was the year.

What Horn’s victory underscored is this: In politics, timing often is everything. She was the right candidate, in the right place, at the right time.

Second, incumbent Steve Russell campaigned as if victory was a GOP birthright. Anyone who’s even glanced at the district’s changing demographics and voting patterns – particularly in OKC – knew it wasn’t.

Finally, you might want to keep the post-2020 Census redistricting on your political radar. If Horn can solidify her hold on the seat in two years, you can bet Republicans will look for creative ways to slice-and-dice her strongest precincts – scattering them among other congressional districts while packing more GOP voters into the 5thin an attempt to recapture the seat.

– Arnold Hamilton is editor of The Oklahoma Observer

CORRECTION: The initial version of this story misreported that Democrats failed to hold Stillwater Rep. Cory Williams’ HD 34 [Williams made an unsuccessful bid for Payne County District Attorney rather than seeking re-election]. Actually, Democrat Trish Ranson, an elementary school music teacher, won the HD 34 seat with 57% of the vote.