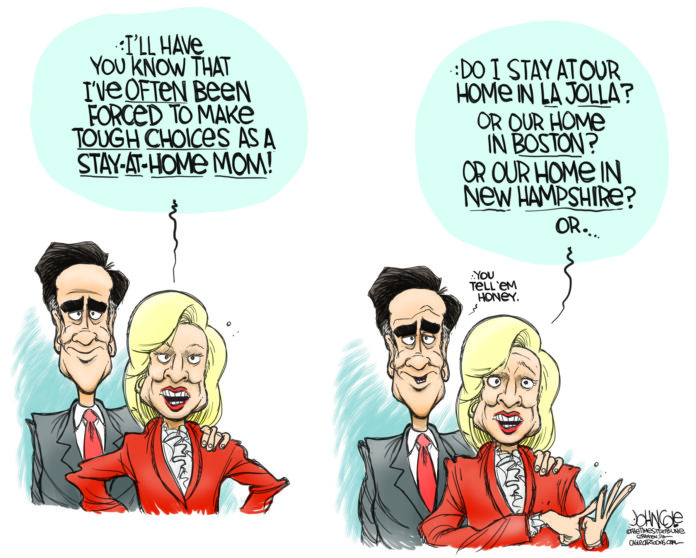 I cannot believe what I saw on Brian Williams [NBC]. Women are visceral about Hilary Rosen saying Ann Romney has never had a job or had to work. Are there really that many women who miss the point?

I guess there are and they are stay-at -home moms with chips on their shoulders.

I stayed at home with my child, but I had to give up a good many comforts that other women insist they need in order to do it. We had two old cars, and I mean old. My ONE house will fit in any of the Romney’s garages at their three homes. I was not raised in a wealthy family and I am not married to a multi-millionaire vulture capitalist.

The point is that Ann Romney never had to make the choice to carry the laundry to the launder mat or take money out of savings to get a new washer and not go visit the folks this year in Texas. She never had to work in order to get health care and she has always had enough money to not have to buy any kind of health insurance.

The woman on Brian Williams, who says she considers herself a liberal, has three children and one on the way and appears to have a really nice house. Another thing she has is a brain on pause.

Rosen was not saying that stay at home mothers do not work, she was saying that Ann Romney can do whatever she pleases because she is a multi-millionaire. She has been wealthy all of her life and can afford help if she wants it. She has two Cadillacs. I have an eight-year-old Toyota that squeaks so loud it wakes the neighbors.

The Romneys are doing their usual and trying to say that liberals have a war on stay-at-home moms; do not fall for that.

I am 65 and I just went back to work part-time because my daughter just had my first grandchild and I want her to be able to stay at home with the baby as long as she can because she is 2,000 miles away and there is no family member to leave the baby with and good daycare is not cheap.

Ann Romney has health problems, but she also has all the money she needs without Blue Cross, United or Aetna. Her husband claims that people wait until they are sick to even attempt to get health care and “we don’t play that game.”

You women are allowing the rightwing to make this about stay-at-home mothers and it isn’t. It is about mothers who can’t stay at home because they have to help support their kids. Some of those mother’s have to work several jobs besides working at home.