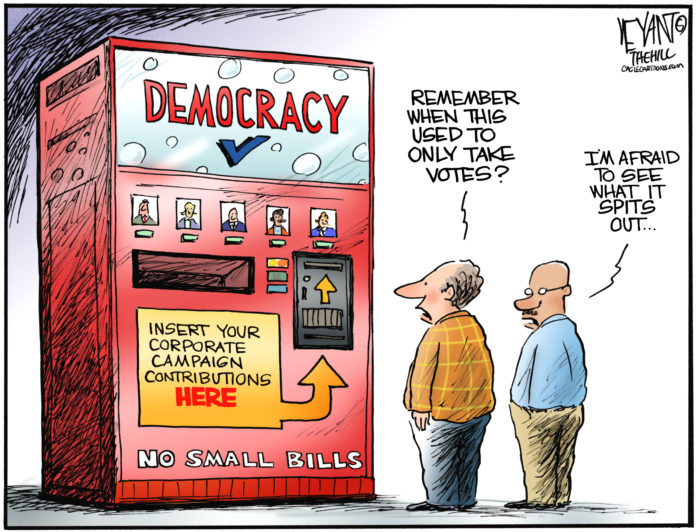 If money is power, shouldn’t the collective power of the American taxpayer be in charge?

No, because we’ve been outspent, in dollars and in perks. Think Jim DeMint and his million dollar job with the Heritage Foundation. Think Frank Keating and his annual salary from the insurance industry. It’s hard for a middle class taxpayer to compete with that.

It’s a problem, too, when legislators fear for their jobs for doing their jobs. When nobodies like the NRA or Grover Norquist can send a legislator packing, who’s brave enough to do the right thing?

It’s doable, unless those doing the balancing act are afraid of campaign fund donors who are waiting below the high wire for their legislative handouts.

The American public can fix this mess by rising up and demanding real campaign finance reform. Our voices have been drowned out by the free speech of big dollars. But if all of us shout together, we can be heard demanding repeal of Citizens United and insisting on public financing for political campaigns. That’s where we have to start.

There are more of us who work hard for every dime than there are those who make money just for getting up in the morning. Those hard working dimes pay a lot of bills. They build bridges and pay legislative salaries. They fund schools and feed the hungry. They speak, and 99 working voices should always be louder than one boss voice.

It’s time for the 99 to rise up and say, “It’s my turn.” Let us speak en masse, carrying signs and writing letters to our legislators and our president demanding campaign finance reform.

When we’ve insured that all voices can be heard and not just the voices of a select few, then we can start to tackle the rest of our problems.