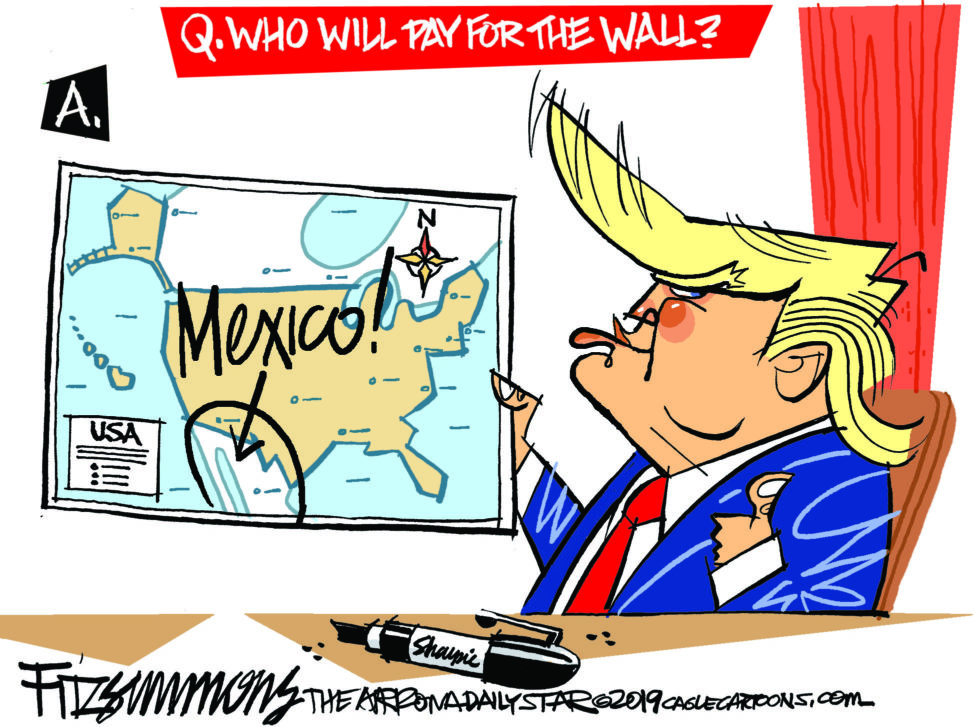 More Than One Way To Deter Foreigners

President Trump is going to build his anti-Mexican wall. Not all of it. But – for the first time, despite his repeated lies – there will be more than just repairs to existing border structures.

“Who’s going to pay for it?” our bigot-in-chief screamed, during his campaign.

Well, it ain’t gonna be Mexico.

Those bills – along with $110 million and counting paid into the coffers of Trump’s golfing properties during his 227 days of relaxing from those tough, four-hour days, four days a week – are being picked up by American taxpayers, who also are picking up the tab to cover the president’s bigotry, lies, ignorance and laziness.

Last week we finally saw where money is coming from for Trump’s Folly. The president is taking $3.6 billion Congress approved for 127 military projects to satisfy his racist base – which is paying for the wall [not Mexico!] along with the rest of us.

According to ABC News, the damage to military preparedness and military men and women is evenly divided at $1.8 billion between overseas projects and those stateside and in the territories.

Remarkably, the losses in U.S. projects are about evenly divided between Democratic and Republican congressional districts: $101 million more from Democrats; three more projects from the GOP.

Then there’s the $400 million project lost in Puerto Rico. You’d think a developer contemplating swapping that island for Greenland would realize that he needed to make some enhancements to sweeten the deal. Might explain those bankruptcies.

ABC quoted Virginia Sen. Mark Warner as saying, “Taking money away from our military … will mean we are less equipped to tackle threats here at home and abroad.”

And about those threats here at home?

Well, there’s another way to discourage foreigners – carriers of such dangerous ideas as decent health care for all.

Last month, Amnesty International “issued a global travel warning for anyone currently traveling — or planning to travel — to the United States.”

The advisory got more specific: “Depending on the traveler’s gender identity, race, country of origin, ethnic background or sexual orientation, they may be at higher risks of being targeted with gun violence and should plan accordingly.”

In a story from Common Dreams, Ernest Coverson, campaign manager for the AI End Gun Violence Campaign, said any travelers to the U.S. “

“ ‘should remain cautious that the country does not adequately protect people’s right to be safe, regardless of who they might be.’

“Coverson noted that those in the U.S. under current conditions “cannot reasonably expect to be free from harm – a guarantee of not being shot is impossible. Once again, it is chillingly clear that the U.S. government is unwilling to ensure protection against gun violence.”

Last month CNN reported that Uruguay and Venezuela warned their citizens about American racism in advisories.

In 2016, CNN adds, the Bahamas was more direct: “In particular young males are asked to exercise extreme caution in affected cities in their interactions with the police.”

The official AI statement includes, “The action called attention to the extent to which all aspects of life in the United States have been compromised in some way by unfettered access to guns … By prioritizing gun ownership over basic human rights, the U.S. government is willfully and systematically failing on multiple levels and ignoring its international obligations to protect people’s rights and safety.”

So, those we can’t wall out [walls don’t work, mind you], we can scare away with our rampant violence. You could say that this will ensure us that our superiority won’t be tainted by outsiders – except that our collapsing society and our governments’ refusal to do their jobs sort of puts such boosterific superiority in question.