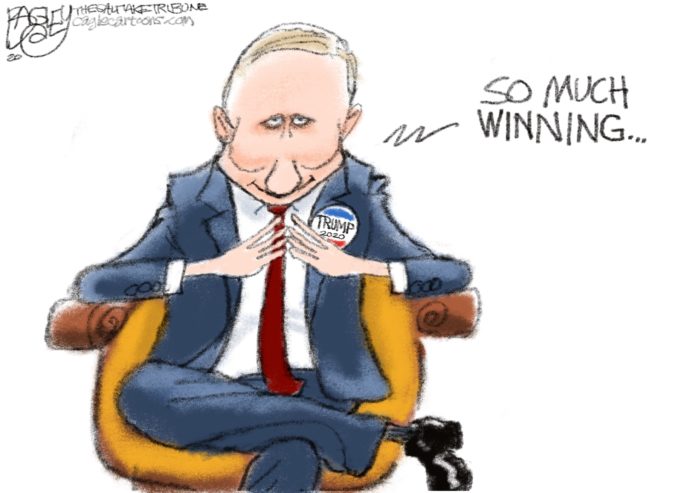 A familiar political adage of uncertain origin is, “The enemy of my enemy is my friend.” But history suggests the opposite is often true, literally from its beginning.

Herodotus, the author of the first History, details the alliance between Athens and Sparta to fend off Persian conquest. Thucydides, his immediate successor, wrote The Peloponnesian War about the war between those city states.

The enemy of my enemy might be a temporary ally. But that common ground can prove to be weak and shifting sand.

Hernán Cortés would have never conquered the Aztecs without the help of Native American allies. The Aztecs were lousy neighbors and worse conquerors. Rallying opponents against their tyranny was easy. But the Spaniards’ allies soon discovered that it was an unequal alliance.

During the Spanish-American War, the U.S. was assisted by freedom fighters in both Cuba and the Philippines, neither of which were fighting to become U.S. territories.

At the outset of World War II, Germany and the Soviet Union allied long enough to carve up Poland – and then the Germans invaded eastward. The USSR then joined with the Allies to defeat the Germans in another short-term alliance that ended with a Cold War.

Vigilance, not naiveté, is essential when forming alliances.

In 2016, Donald Trump squared off against Hillary Clinton. As it turns out, Russia had a preference against an informed, competent president who viewed its leadership with skepticism – and wasn’t trying to curry favor toward a Moscow Trump hotel.

So, Trump welcomed Russian assistance – even called out for it in public, in fact, right after his team met with Russian operatives – either oblivious to Russia’s hatred of USAnian rights and freedoms or willing to sacrifice our republic for personal gain.

Mark Sumner of Daily Kos reported last month: “Donald Trump has spoken with Vladimir Putin at least eight times since February. In all those calls, Trump has never brought up to Putin Russia’s program of paying out bounties for the death of American forces in Afghanistan. Instead, says Trump, he and Putin ‘had plenty of discussion’ about ‘other things.’ The nature of those other things was not disclosed, but there may be a clue on Thursday morning as the United States announced that it was withdrawing nearly 12,000 troops from Germany.”

While Reuters reported that the troop withdrawal was a typically Trumpian tantrum tactic to spite German Chancellor Angela Merkel, Sumner points out, “the result of this move is that the United States will end up spending billions more, not less, while deploying troops in a position less suited to defend Eastern Europe. The announcement signals a continued weakening of the U.S. presence in NATO, a continued weakening of the U.S. posture toward Russia, and a continued operation of U.S. foreign policy based on the ‘personal relationship’ of Trump and foreign leaders.”

The United States of America gets no benefits from Trump’s personal foreign policy that is making Russia greater on a daily basis. The president keeps getting Russian assistance and Sen. Mitch McConnell brings a $300 million Russian oligarch’s investment to Kentucky. Putin gets the weak and ineffective U.S. that frees his hands to spread his tyrannical influence throughout the world.

And now, we hear that Putin’s Puppet wants to bring his Geppeto to the U.S. before the November election – evidently to get their collusions in order and for our own lying President Pinocchio to get his marching orders or maybe advice on how to steal the election.

Maybe we can find an honest prosecutor to arrest Putin for the contract killing of our soldiers. What else is a bounty except a pay-to-kill proposition?

Putin’s Russia is not a friend of the United States. Putin is not a friend of Trump. They have united against a common foe – the Democratic Party, which at this time represents informed USAnian foreign policy to Putin and a threat to Trump’s habitual grifting.

Russia, enemy of Trump’s enemies, is no friend to any of us. Putin would smash our pathetic president along with the rest of us if given the chance. And Donald Trump keeps enhancing Putin’s chances for his own selfish ends.