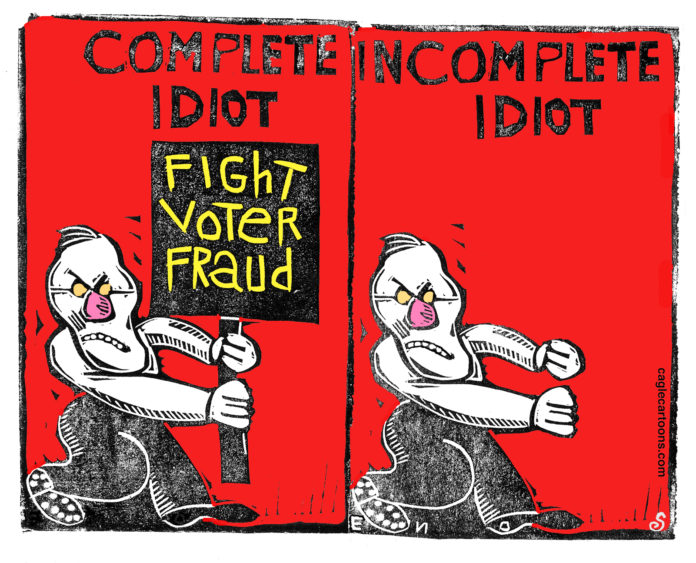 A myth can be a wonderful thing: Santa Claus, Tooth Fairy, Easter Bunny, that we know Great Aunt Haddie was a virgin because she never married.

Then there are those myths that do more harm than good: Most people on welfare use their benefits to buy drugs and we need stricter voter ID laws because of fraud.

Take a look at the first myth.

Florida found no such drug use when it examined and tested welfare recipients. Now, Oklahoma has joined the myth-buster ranks. Recent state findings show that of 1,300 recipients tested only 29 tested positive for drug use, or 2.2%. In other words over 97% of those receiving Temporary Assistance for Needy Families [TANF] were drug free.

The survey cost the state of Oklahoma $74,000. Not factored into that cost was the time legislators spent enacting laws requiring testing, before having any facts or data, in the name of doing the people’s business. But it could be said no harm was done – except for the public humiliation of 1,271 people who were accused of being drug users based solely on the fact that they were poor.

Likewise the Teabag cousins in Georgia did a similar survey regarding drug use among those receiving unemployment benefits. The state investigation discovered one – one – let’s say that again – ONE, drug positive claimant.

Now, South Carolina has joined with Oklahoma and Florida in dispelling yet another myth: voter fraud. Teabag Madam Republican Gov. Nikki Haley campaigned hard and heavy, much like Gov. Mary Fallin, to enact a voter ID law to prevent fraud at the polls during the last election.

The theme was to prevent people using the voter registration of the deceased to vote in the election – so-called Zombie-Voters.

The results were even more startling than the Oklahoma welfare drug test: No such ballots were found in the entire state.

The Free Times of Columbia, SC tells the story: